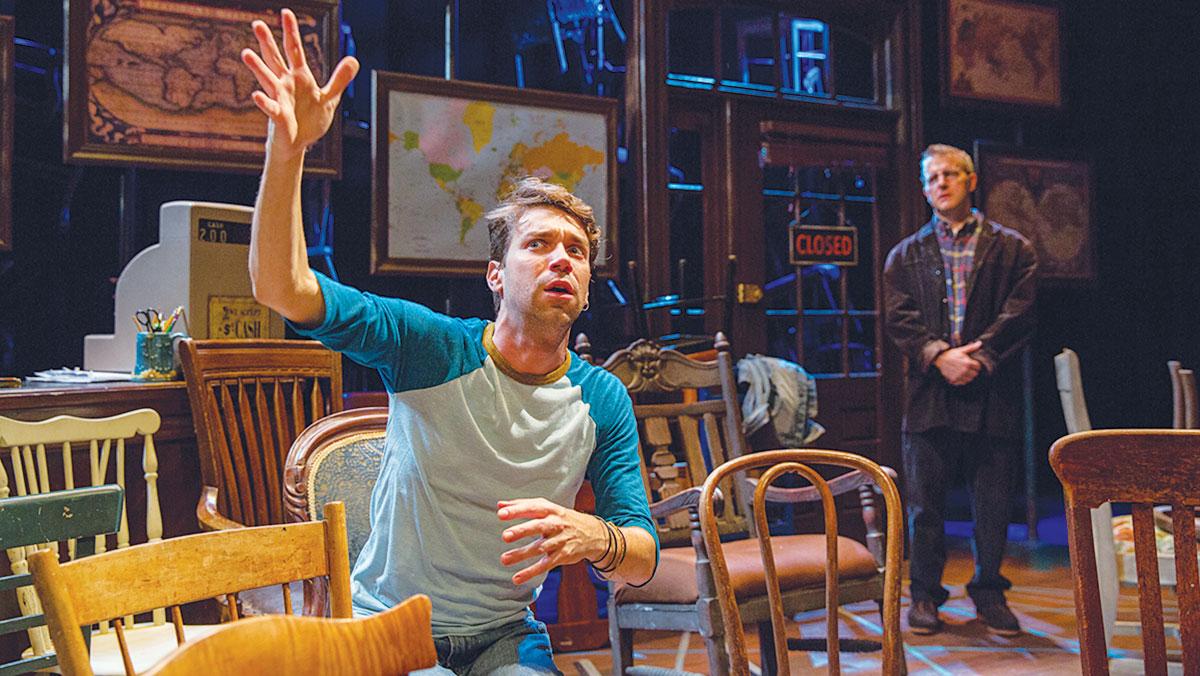 On the oldest street of an unnamed city somewhere in America lies Jody’s Maps, an aging map store lined with the yellowing atlases of many past eras and generations. Carl (Karl Gregory) bursts in the store’s front door, lugging a bundle of chairs. He places them down, among the many others that have begun filling the store’s interior. Jody (Nat DeWolf), the store’s owner, looks on, grim and frustrated. These chairs, though only simple household fixtures, are much more to the pair. They are reminders of a looming fear, one that they both must confront — for better or worse.

It’s within this single, quaint shop that Steven Dietz’s “Lonely Planet,” a two-character play, takes place. The production follows Jody and Carl, two gay men and best friends in the midst of the 1990s AIDS epidemic. The Kitchen Theatre is bringing this tale to life for its 2014–15 season, allowing patrons to watch on as both Jody and Carl cope with the turmoil around them. This journey proves as touching as it is harrowing, thanks to riveting performances from both Gregory and DeWolf, and the Kitchen Theatre’s cozy theater space.

What will first strike visitors to the Kitchen Theatre’s show room is the intimacy. The venue in which “Lonely Planet” is presented is small, with only four rows of seating, and as a result this introspective tale of love, loss and grief gains a new dimension of expression. In the many moments where Carl, a delightfully sardonic character, reels off in flamboyant prose, his expressions are clearly seen, and the emotional connection is amplified. Once the production’s tone becomes more pained and the ghastly impacts of AIDS are revealed, audience members can easily spot each of Jody’s nervous trembles.

None of this would be of any value without powerful performances to utilize it, though, and in this realm “Lonely Planet” delivers from beginning to end. Though only two actors make up the production’s cast, they deliver a degree of characterization that would be commendable for a full ensemble.

Jody, whose worldly, more reserved demeanor starkly contrasts with Carl’s, is rendered by DeWolf with elegant precision. He captures a range of emotions, from incredulous to distraught with impressive nuance, notably during his several monologues, which serve to illuminate the thematic dimensions in “Lonely Planet.” In one instance, Jody looks out over the many chairs that fill his shop, those which once belonged to his friends and acquaintances, now dead. A flash of despair tears across his face that is both subtle and convincing, a welcome change from the extravagant melodrama featured in some productions.

At the same time, Gregory tackles the complex character of the comical, yet deeply sentimental Carl with success. As he battles with the loss of the people around him, his sadness is impactful, and much like the performance of his co-star, feels realistic in its depiction.

While these performers excel by themselves, they are a particular joy when interacting with one another. Their contrasting personas clash wonderfully, fueled by the sharp dialogue Dietz has crafted for them. Be it a playful sword fight with rolled-up maps or a climactic, screaming argument, their lines are traded with a tangible chemistry and sincerity.

This is perhaps “Lonely Planet’s” greatest strength — sincerity. Dietz’s symbolic interpretation of those lost in the accumulating chairs is a potent but well-devised device. As the play concludes with Carl sitting on his own chair, Dietz succeeds in examining the notion of death, and life after, for that matter, with a symbolic elegance that feels remarkably well realized.

“Lonely Planet” is a sterling example of balance in theater. From the piling chairs to the sarcastic quarrels, there is a certain genuineness to it all that will prove appealing to theatergoers of all sorts. The journey Dietz has crafted for Jody and Carl is by no means an easy one, and thanks to fine execution by the Kitchen Theatre, each moment of turmoil — or humor — has been delivered with commendable poise.