Review: ‘First Man’ is a terrifying tale of moon mission 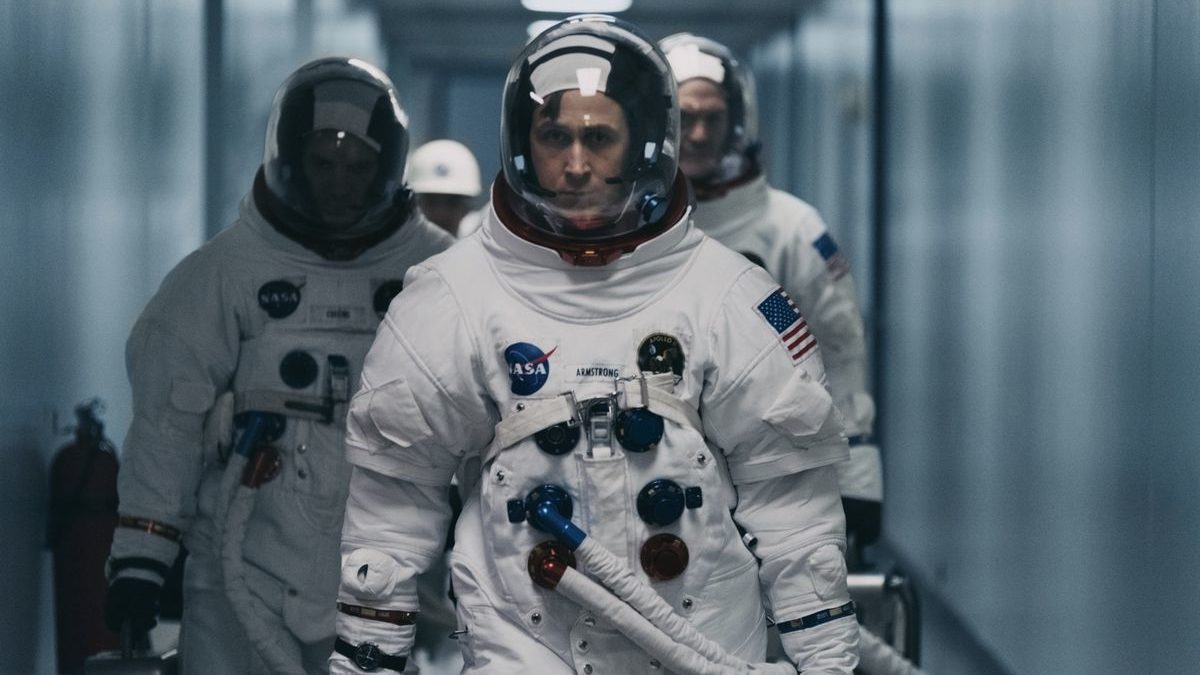 “First Man” has landed, telling the story of Neil Armstrong and his family as they prepare for his terrifying mission to the moon.

This film marks the second consecutive collaboration between director Damien Chazelle and actor Ryan Gosling, and it is a remarkable demonstration of the versatility these two artists possess. The film takes a different approach to the moon landing than most, presenting the mission as a horrifying gamble rather than a whimsical exploration of space. The film also works at great lengths to show what kind of effect Neil’s behavior had on his kids and his wife, Janet (Claire Foy). The film struggles with pacing a bit and isn’t always the exhilarating thrill ride that the marketing promised. Even so, “First Man” is a touching story about love and fear that puts the viewer in the shoes of the astronaut who made history.

Expectations were high for director Damien Chazelle, who is the youngest person in history to take home an Oscar for best director. Thankfully, Chazelle delivered another great film to put on his résumé. Chazelle’s previous two films, “Whiplash” and “La La Land,” were passion projects that he spent years writing until he was finally given the chance to direct. “First Man” differs from his previous work — it was written by Josh Singer and based on a biography by James R. Hansen. The film lacks the same directorial flair that Chazelle’s previous works have. When the credits roll at the end, it is almost surprising to see Chazelle’s name appear. The film has drab sterility to it that feels like a Christopher Nolan film. This film shows Chazelle’s growth as a more versatile filmmaker, but it’s difficult to leave the theater without a sense that the film was missing something. “First Man” feels more like a fascinating feat of factual storytelling rather than the stylistic passion-driven stories of Chazelle’s past.

With performances from Gosling and Foy as Neil and Janet Armstrong, the film’s emotional core feels grounded as Neil deals with the astronomical dangers of space travel. Because Neil is dealing with imminent danger when he is training with NASA, he has a hard time expressing emotion with his family. Because of Neil’s wooden behavior, it makes Gosling’s performance feel lackluster at times — lackluster, but accurate. Foy delivers the best performance in the film as she begins feeling sympathetic to Neil, but her emotions evolve into feelings of anger and frustration with his distant behavior. We see Janet single-handedly raise their kids while Neil pursues space travel. On top of that, Janet deals with the thought that her husband may be dead soon, and he does nothing to prepare his family for that reality. The struggle between them is a prominent part of the film, but the two veteran actors make it feel just as difficult as space travel. Janet is trying to raise a family without help from her husband, and Neil is trying to land on the moon with no help from his wife. It’s rare that a film can make two conflicting struggles feel equally important, but “First Man” is one of those rare cases.

While the film spends a great deal of time developing Neil’s relationship with his family, the film’s climax and focus are still, ultimately, the mission to the moon. Much of the second act of the film feels rather dull as none of the characters seem to progress very much, and the viewer is left waiting to see the mission finally occur. The silver lining reveals itself as the moon landing sequence is as intense as on-screen space travel has ever been. This is the only film that puts so much care into showing just how treacherous the journey to the moon was. The sound mixing and production design create a feeling of uncertainty and chaos as the men are sent hurtling through space. It’s both shocking and eye-opening to see people in a control room writing everything down, because it was 1969, and that was the peak of technology. As the rocket takes off, there is constant rattling that helps demonstrate how unnatural going into space is. The film does an incredible job showing just how absurd the mission to the moon was.

The film doesn’t move at rocket speed. It doesn’t even powerwalk. “First Man” is a film that takes its time to tell the story, and sometimes it feels like everything has come to a complete stop. This dullness is most evident when Neil is on screen alone — there is a smattering of shots that feature Neil sitting or standing alone doing nothing, and they almost all feel meaningless and boring. The film also feels dull at the beginning when Neil’s journey to space exploration is slowly gearing up to start. Much of this stagnation comes from the lack of sound throughout the film. Scenes are riddled with long silences that serve little purpose, and the score often comes in at unwelcomed times, making the fade in feel obvious and ham-fisted. The meandering pacing of “First Man” is by far the largest downfall of the otherwise interesting story.

As a film about space travel, Chazelle’s “First Man” succeeds at telling an interesting story that looks at the moon landing through a different lens than most films of its kind. It succeeds where it counts: It gives the characters real struggles, causing the viewer to feel conflicted, and provides the most terrifying and real representation of space travel ever. Where “First Man” falters is its dull start and overall slow pacing. However, Chazelle’s directing ability is strong enough that the film makes up for most of its shortcomings in the overwhelming attention to detail. With strong emotions and frightening space travel, “First Man” isn’t entertaining throughout every small step but ends with one giant leap that makes it worthwhile.