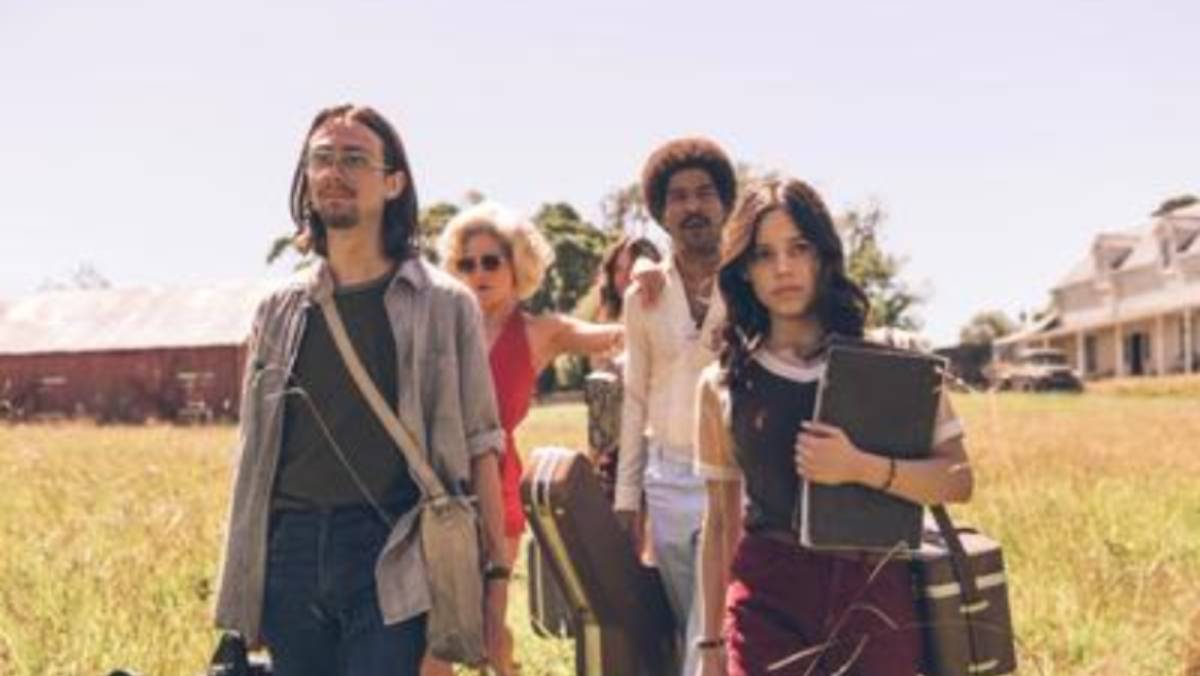 Courtesy of A24
"X" leaves viewers both entranced and a bit squeamish. The stunning cinematography and acting is highly praised.
By Sydney Brumfield — Staff Writer
Published: March 30, 2022

In the 1979 back country of Texas, entrails are splattered, lives are irreversibly changed and cinema is made in Ti West’s new film, “X.” Though this film may not be for viewers with a weak stomach, with exceptional writing, staggering visuals, compelling characters and superb editing, “X” is a masterpiece.

“X” follows a group of starving artists who venture to a farm with the hopes of making the most cinematic pornography film to date. Upon their arrival to the farm, conflict quickly arises as the owners of the property — an elderly couple named Howard and Pearl — are extremely religious and have a conservative outlook on how the younger generation behaves. Over the course of 24 hours, the two worlds of rigid tradition and younger fluidity bump heads, finally resulting in a large-scale blood bath.

Immediately “X” draws viewers in with outstanding cinematography. The washed-out colors and visual strategy transport the audience back to the late 70s in rural America in an eerie and mystifying manner. The camera work, shot styles and editing are extremely well done. Most compelling is how as the character RJ (Owen Campbell) begins filming on his camera, the movie cuts to a smaller aspect ratio. During these sequences, a yellower color palette is also utilized to show the viewer what RJ is seeing through his camera. These techniques truly immerse viewers into the terrifyingly entrancing world of “X.”

What makes “X” more than just a run-of-the-mill slasher film is its brilliant narrative and complex themes. The character of Maxine (Mia Goth) — the primary main character — has entered the adult entertainment industry as a route to reach Hollywood and be famous. Maxine feels the best years of her life may almost be passing her by as she has been patiently awaiting her chance at stardom. When she arrives at the farm, her and Pearl play brilliant parallels of one another which, if picked up on, can chill viewers. These characters mirror the themes of old versus young, religion versus secularism and ultimately how one’s life can turn out different than initially expected. This would not be possible without Goth’s impactful acting performance.

“X” beautifully confronts viewers with their innermost conflicts and moral alignment with its excellently crafted full-circle narrative. The primary divider between the group of adult filmmakers and all “others,” like Howard and Pearl, is sex. “X” depicts two groups of people: those who embrace sex and sexuality, and then those who, primarily through religion, supress their desires. “X” dares to present these two polarizing ideas in a captivating visual format that pushes viewers to question what damage is done to the individual by stifling human instincts.

Though “X” takes place in 1979, the themes discussed are those still frighteningly relevant in American society today. “X” eloquently critiques fragile masculinity, sex, religion and tradition in a seamless manner. West brilliantly wove these themes into the core of this story, allowing audiences to sit back and enjoy the spectacle.

None of this would have been possible without the extraordinary performances given by this all-star cast, including Jenna Ortega, Brittany Snow and Kid Cudi. Not one performance is the same. Each character brings with them their own challenges to tackle from an acting perspective, as they are all fully formed with clear goals and agency. From struggles with financial stability, to finding acceptance in a conservative community, to fighting for their lives, this cast brings its A-game. The talent effortlessly brings this story to life and elevates the dialogue to new heights. Their performances walk the challenging line of being chilling as well as comical at times to create a false sense of security. Furthermore, these characters are brilliant; every one is three-dimensional, flawed and completely authentic.

The horror elements of “X” are dreadful in the best way possible. Howard and Pearl are sickening to the observer as West uses costume design and how the characters are lit to visually relay to the viewer just how worn down and heinous the couple is. The modes of death in “X” are ghastly, sticking with viewers long after leaving the theater.

“X” is a hauntingly heartbreaking look into realities that have grown even more prominent in society. America’s obsession with wealth, religion, fame and notoriety are dissected before viewers’ eyes. “X” is a beautiful catastrophe that audiences cannot look away from.