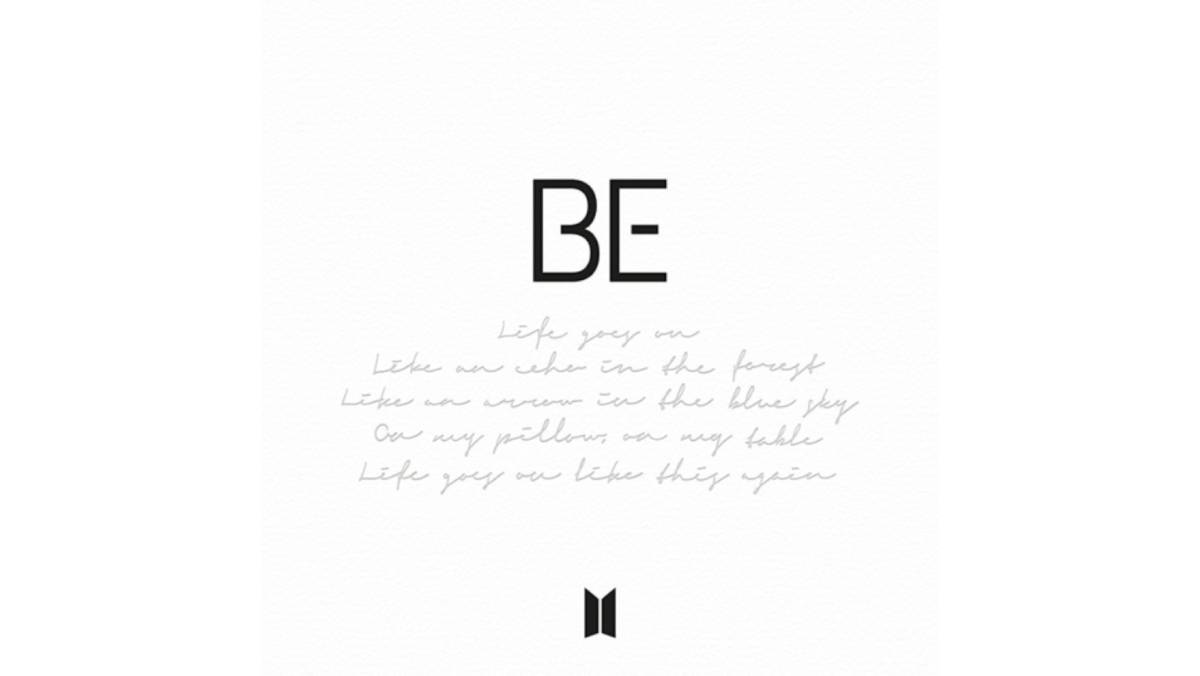 Courtesy of Big Hit Entertainment
“BE” is an emotional and heartwarming album partially inspired by BTS’s “LOVE MYSELF” campaign and the band’s speech at the 75th United Nations General Assembly.
By Jasmine Morrow — Contributing Writer
Published: December 1, 2020

BTS, also known as the Bangtan Boys, is the most popular K-pop boy band in the world. The band consists of seven artists: Jungkook, V, Suga, Jimin, J-Hope, RM (Nam-joon Kim) and Jin. On Nov. 20, the band released its new album, “BE.” BTS members are constantly diving into how they can better themselves and the world. Members of the band encourage their fans to express their voices and be real about how they are feeling, a sentiment that puts them above other boy bands. “BE” is full of hope and works to inspire BTS fans during such a difficult time in the world.

“Life goes on. Let’s live on,” was BTS’ main message during its speech at the 75th United Nations General Assembly on Sept. 23. The group appeared there after working with UNICEF on the “LOVE MYSELF” campaign. During this appearance, it spread the message of “Let’s live on in a new world, breaking free from despair and supporting one another in warm solidarity.”

BTS’ U.N. speech inspired the first track on the album, titled “Life Goes On.” “Life Goes On” promotes solidarity among listeners, especially during COVID-19.pandemic. The song is laid–back but stays true to the elemental originality of K-pop. K-pop follows general pop music standards and is mixed with musical elements taken from hip-hop, reggae, country and so on. The beat in “Life Goes On” is reminiscent of one of its older songs, “소우주,” which roughly translates to “a small world order” in English.

“병,” or “Dis-ease” in English, follows more traditional K-pop formatting with a predominant hip-hop flair. “병” addresses the disadvantages of an artist’s profession. An important line that emanates the meaning of the song itself is, translated to English, “Oh, just do your job / I’m ill. Yeah, I’m the job itself.” This song addresses the issues surrounding the music industry in which artists are seen as a commodity and not as human beings who are flawed.

The song that speaks with the greatest emotion is “Blue & Grey.” Suga’s verse is the most empathetic part of the song. His deep vocals allow for an easy transition from the introduction to the chorus. The English translation of part of his verse is, “Since my youth, I’ve had a blue question mark in my head / Maybe that’s why I’ve been living so fiercely / But when I look back I’m all by myself / That hazy shadow that swallows me up.” The song has a lower tone and a slower beat than most BTS songs with the members both rapping and singing. The song flows well with RM and Suga’s low tones juxtaposed with the softness in Jungkook and V’s voices. This song highlights mental illnesses and symptoms the group members have experienced during the pandemic. Mental illness during the pandemic is an important topic to address because most listeners do not know how to navigate through these prolonged periods of isolation and depression.

The track “Stay” is one of the most earnest on the album. The track’s melody is uplifting, and its message speaks of connection. The song is the band speaking directly to its fans and reaffirming that it will always be there for them, even during difficult times. This is shown by the lyrics, “Our heartbeats are louder than ever / No matter where we are right now / Together, wherever yeah.”

“Dynamite” is the last track on the album and is arguably the most popular song on the album. It is the perfect way to wrap up the album because it gives fans an anthem to dance and shout to, with its upbeat melody and catchy chorus. It leaves BTS fans on a positive note and shows them that there is hope.

Overall, the album is the most genuine album BTS has released thus far. The album encourages fans to keep looking for the light at the end of the tunnel.