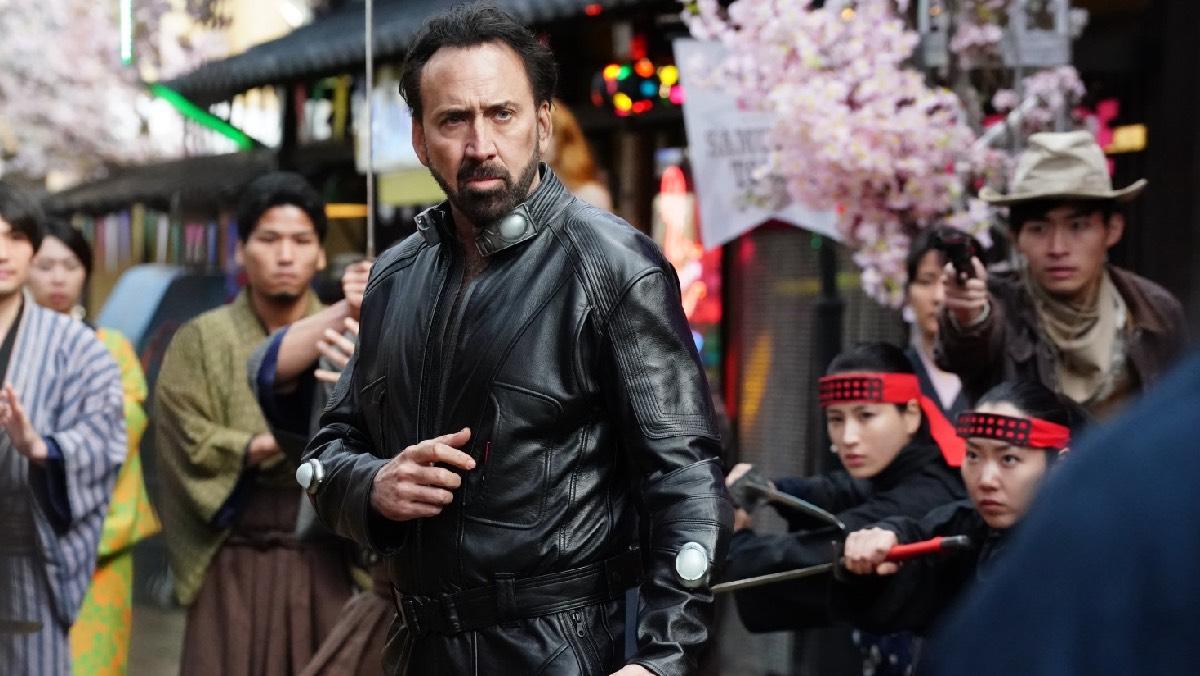 Courtesy of RLJE Films
The newest Nick Cage movie is as disturbing in its excessive gore as it is in the way it treats its female characters.
By Sydney Brumfield — Staff Writer
Published: September 28, 2021

Prisoners of the Ghostland

Looking for the next big movie to simultaneously induce feelings of disgust and boredom? Look no further than “Prisoners of the Ghostland.”

“Prisoners of the Ghostland” is an action-horror-thriller directed by Sion Sono that tells the story of a criminal named Hero (Nicholas Cage) who is forced by the Governor (Bill Moseley) — the most powerful man in Samurai Town, Japan — to bring back his missing granddaughter Bernice (Sofia Boutella). Dressed in a suit composed of strategically placed explosive devices to ensure his cooperation, Hero searches the radioactive wasteland to save his life and gain his freedom. Despite having an out of this world premise, “Prisoners of the Ghostlands” offers little actual substance to keep the audience engaged.

In a world that exists in the aftermath of a nuclear power plant disaster and is riddled with class struggles, it is clear Sono is attempting to have the audience conduct an internal dialogue with these topics. Unfortunately, the execution of this plot is disjunctive, poorly delivered and the dialogue has no consistent tone. Cage’s performance alone pulls the audience out of the atmosphere of the film as each line sounds like it comes from a completely different character. The film unsuccessfully walks the line between unintentional satire and drama.

A lot of the film is poorly executed gore. The largest source of gore is the suit of explosives Hero wears. The explosives detonate when they sense danger is being inflicted upon a woman, to prevent him from violently assaulting Bernice. There are multiple scenes where the audience watches Hero grow more brutally disfigured due to the explosives. The most disturbing and unsettling of these is when Hero becomes violently aroused by Bernice, thus causing one of the explosive devices located on his netherregions to explode in graphic and disturbing detail. This scene doesn’t serve as an obstacle for Hero, thus making it feel even more senseless. Other deeply upsetting scenes include the use of unnecessary violence against women as nothing more then a dramatic time filler and lazy action sequences.

It is easy to create fully formed female characters. Film history shows that movies do it all the time for male characters. So the fact that the female characters in “Prisoners of the Ghostlands” have no motives, goals, obstacles, agency or arcs is beyond disappointing. Bernice’s motivations, goals and characterization are nonexistent. Her only purpose is as the unobtainable object for the male protagonist to chase after.

While the female characters are trivial, the male characters aren’t much better. Both Hero and the Governor are violent misogynists brought to life by lazy performances by the actors. The world of “Prisoners of the Ghostlands” has endless possibilities for creating conflict throughout the plot. Yet Sono rarely engages with it, and instead spends screen time focusing on lazily crafted characters and the thinly propelling plot about Hero returning Bernice to the Governor.

Upon finishing the film, the audience is left simmering in the glorification of Cage’s chauvinist character instead of being left with a deep reflection of societal issues. Hero is neither a flawed protagonist or a compelling anti-hero. He cares little for the well being of others and has an inferred history of violence against women. When Hero interacts with characters he is unresponsive, his face expressionless. Instead of having an arc, the audience gets to watch Hero save the day and walk away.