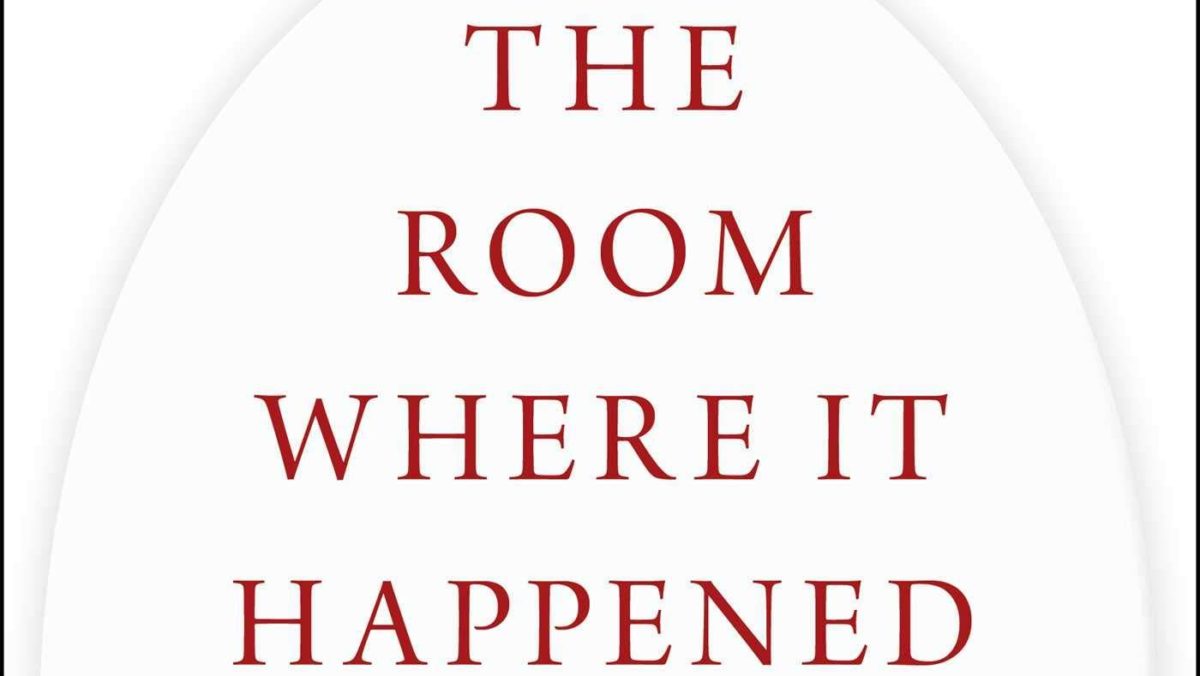 Courtesy of Simon & Schuster
When John Bolton announced he was writing a bombshell book about his experience as President Donald Trump’s former national security adviser, pandemonium ensued. However, the sought-after details are more pseudo-patriotic and hilarious than they are substantive.
By Elijah de Castro — Staff Writer
Published: July 4, 2020

The Room Where It Happened

At the height of President Donald Trump’s impeachment trials in January, “The Room Where It Happened” by John Bolton, Trump’s former national security adviser, was advertised as a bombshell account of Trump’s corruption. Democrats pushed to have Bolton testify in the trial while Republicans dismissed Bolton as trying to sell a book. Six long months of futile attempts at censorship later, the book proves the rare occurrence in which both parties were right.

As a Ronald Reagan and George H. W. Bush–era Republican consultant, Bolton fills pages discussing how a billionaire-turned-president was lousy at crafting foreign policy. Who knew? “His thinking was like an archipelago of dots, like individual real estate deals, leaving the rest of us to discern or create policy,” Bolton writes.

Funny observations into Trump’s amateurism are scattered throughout the book, but they don’t make up for Bolton’s questionable criticisms of Trump’s muddled approach to foreign policy. Trump won on a mainly populist agenda, and one of his big promises was ending regime change wars in the Middle East. However, Bolton is an establishment neoconservative who has been described as a major architect of the United States’ war in Iraq, an intervention that has been described by some as illegal. As he writes about his frustration with Trump’s hesitance toward hawkish foreign policy, Bolton acts as a Dick Cheney-esque character.

At one point, Bolton describes an argument with Trump about a potential missile strike in Iran. Trump argued with Bolton, saying that the death count on the news would be too high to warrant an attack. In the following paragraph, Bolton describes it as “the most irrational thing I ever witnessed any President do.” When Bolton criticizes Trump for his scatterbrained understanding of politics, readers will laugh. But it’s shocking and disturbing when, on the other hand, Bolton criticizes Trump for refusing to use his powers as commander in chief to the highest potential.

Readers must remember Bolton’s position while reading his book. Bolton’s frustration is not just about Trump’s inexperience with the complicated world of foreign affairs and messy diplomacy. It’s also about Trump’s willingness to treat foreign leaders as assets for reelection rather than chess pieces in an endless game of military regime chicken. However, readers will be left in the dark to discern which of these two is worse.

Bolton occasionally brings up the intrusive foreign policy of former President George W. Bush as if it was the standard to which all foreign policy should be held. Bolton clearly longs for a time when aggressive foreign policy decisions could go unchecked. The pseudo-patriotism that previous presidents brought to dropping bombs, slapping down heavy sanctions and securing foreign oil reserves is gone for Bolton, leaving him and his fellow alleged war criminals with smoke billowing out of their ears.

The sexiness of the book’s near-censorship and significance is really what “The Room Where It Happened” is all about. The title is also a reference to the song “The Room Where It Happens” from the popular revolutionary-era musical “Hamilton,” further proving Bolton’s eagerness to sell the book as a flashy object. Bolton was likely not concerned with the quality of the book while writing it — just the prospect of its place as a political tool in connection to Trump’s impeachment trials. The book itself is an underdressed salad of different stories about President Trump’s foreign policy with little substance readers could have hoped for.