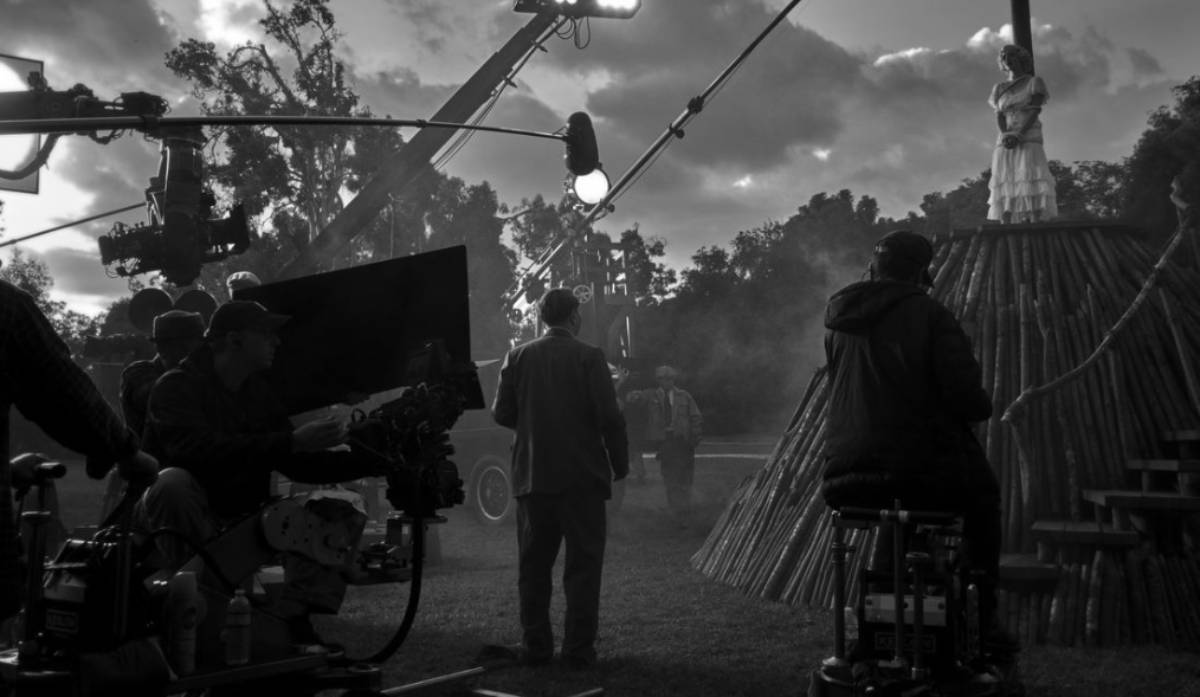 Courtesy of Netflix
For cinephiles, director David Fincher would never be the first choice to adapt a story about the tumultuous behind-the-scenes Hollywood drama that went into the creation of the greatest film of all time — “Citizen Kane.”
By Jackson Noel — Staff Writer
Published: December 12, 2020

For cinephiles, director David Fincher would never be the first choice to adapt a story about the tumultuous behind-the-scenes Hollywood drama that went into the creation of the greatest film of all time — “Citizen Kane.” Orson Welles’ 1941 film documents the rise and fall of influential newspaper tycoon Charles Foster Kane — a character directly based on William Randolph Hearst — through the eyes of a reporter trying to interpret his final words. Fincher’s newest film, “Mank,” proves there is an interesting story to be told, but the narrative never presents itself.

Fincher’s style is almost antithetical to classical modes of filmmaking. The filmmaker is known for clinically flawless camera movements, transgressive themes and requiring hundreds of takes to fulfill his perfectionist vision. The script for “Mank” was written by his late father, Jack Fincher, sometime in the 1990s. “Mank” is an unromantic, intoxicated Hollywood odyssey, but more than that, it is a personal exorcism of sorts for a director who is finally getting the chance to adapt his father’s work.

Set in the early 1940s, the titular Mank (Gary Oldman), full name Herman Mankiewicz, is given the chance to write a film for RKO Pictures in collaboration with wunderkind Orson Welles. The writing process for Mank — which culminated with the creation of “Citizen Kane” — was a swirl of alcoholism, film studio politics and writer’s block. The script tells this story in a well-trodden fashion for stories about filmmaking, with one major exception: its cynicism. Rarely does a film about Hollywood attempt to leave viewers wanting to stay as far away from filmmaking as possible. This darker tone contrasts well with the optimistic fanfare of something like “La La Land,” giving viewers a different view of Hollywood from an outside perspective.

Mank is a small fish in Hollywood, and the film spends most of its run time watching him scoff and moralize with the changing tide of the Great Depression era. Making Mank’s perspective its focus gives the film an inertia with regards to its protagonist, who has no real influence on his environment. Mank sees the Hollywood dream factory in economic and artistic danger as a result of the Great Depression. Since he has little social impact on studio producers, this never appears other than the social commentary audience members see manifest in “Citizen Kane.”

The theme of an aging artist struggling with creating his masterpiece is present but left unexplored. The film instead focuses on Mank drunkenly interacting with big names like Louis B. Mayer (Arliss Howard), Metro-Goldwyn-Mayer Studios head, and producer Irving Thalberg (Ferdinand Kingsley) in scenes of acerbic dialogue. Characters in “Mank” talk a lot about the demise of Hollywood as artistry in favor of money-mongering business practices, something that informs the themes of “Citizen Kane,” but for some reason, “Mank” never shows this happening. Mayer is characterized by his growing power in the political sphere of California, specifically in his desire to take down Upton Sinclair (Bill Nye) in his bid for governor. The film misses the scenes of this power playing in favor of fellow socialites assuring Mank of what is going on. The script wants to satirize Hollywood yet is not daring enough to dig into the absurd irony of Hollywood in the 1930s.

Fincher’s direction makes a cursory attempt to make “Mank” not just feel like a film from the 1940s but appear like one too. The first thing audience members will notice is the monochrome cinematography and crackling grain to give the film an old Hollywood feel. Ultimately, though, the attempts to replicate the warmth of classical Hollywood filmmaking are in vain because of Fincher’s characteristically frigid direction. The use of anachronistic technology like the Steadicam and the widescreen aspect ratio break the ’40s verisimilitude. A lot of the techniques used to imitate classic Hollywood films only ever go halfway.

If Oldman had not already won the golden statue, “Mank” would clearly be his prime attempt at best actor. His performance coats the screen in a drunken stupor while delivering snarky monologues. Despite seeming a couple of years too old for the character, his self-deprecating charisma shines through drab writing. Alongside Oldman is Amanda Seyfried as actress and mistress of Hearst, Marion Davies. Her portrayal is larger than life and she is a glamour magnet whenever present.

If Fincher wanted to lazily break through from bleak thrillers into generic dramatic filmmaking, this is a weak attempt. The finished product only ever feels half-baked. Where are the revelations that led Mank to write “Citizen Kane”? What role did Orson Welles play in the writing process? Apparently, the real–life answers are still buried in the annals of Hollywood legend.