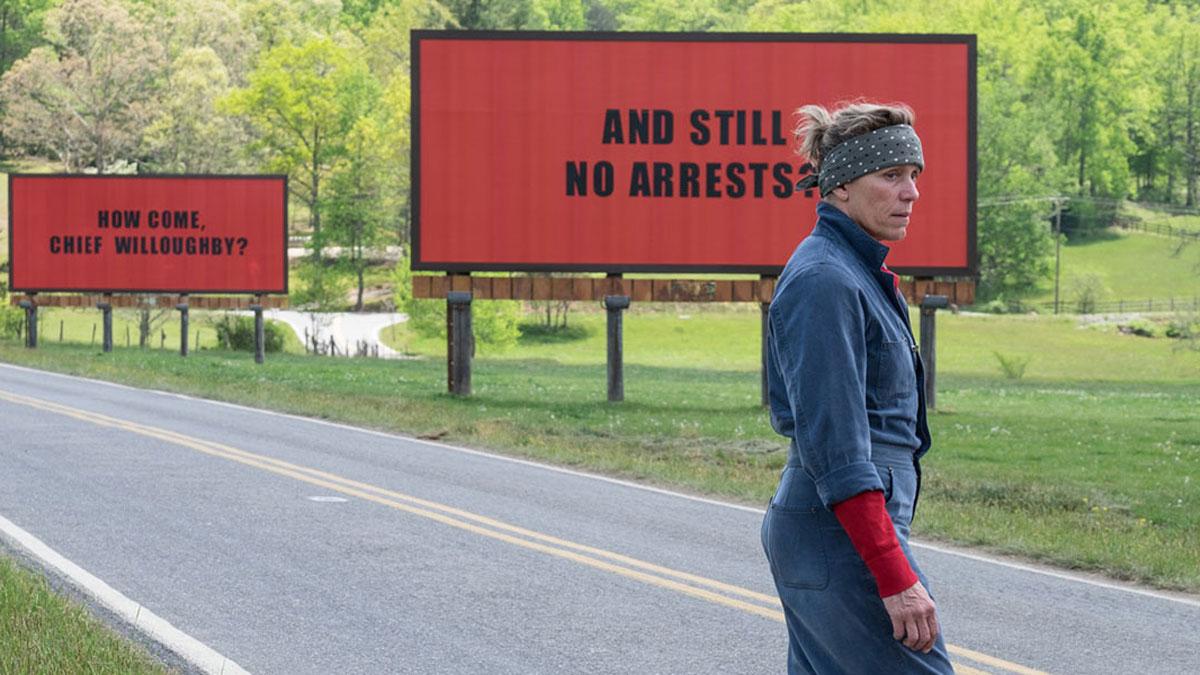 “Three Billboards Outside Ebbing, Missouri,” the latest movie from writer and director Martin McDonagh, follows up his critically divisive film “Seven Psychopaths” with a depressing, hilarious and deeply moving tale chronicling a domino effect of hatred and pain.

The film follows Mildred Hayes (Frances McDormand) as she tries to force the Ebbing, Missouri Police Department to find the man who raped and murdered her daughter Angela (Kathryn Newton). The case has been cold for seven months, so Mildred, fed up with the situation, elects to rent out three unused billboards near her house. She prints on the billboards, “Raped while dying,” “And still no arrests?” and “How come Chief Willoughby?” despite the fact that Chief William Willoughby (Woody Harrelson) is beloved by the town and dying of pancreatic cancer. Unsurprisingly, this move angers nearly the whole town, not to mention the police department itself. The situation is thrown into utter chaos when Willoughby’s mentally unstable second-in-command, officer Jason Dixon (Sam Rockwell), hears about the billboards and decides to do something about it.

Nearly every performance in this movie stands a strong chance at receiving an Oscar nomination. McDormand manages to portray the unapologetic cruelty of Mildred while still injecting as much humanity and honesty as possible. Mildred is an infected, open wound that’s been festering for a year and doesn’t care if the disease spreads. It’s clear that Mildred has lost all patience with the world. She’s lived a long, hard life, and she’s constantly reminded of the decisions that have left her poor and alone.

Rockwell’s Dixon is a racist, homophobic, sexist and immature cop who only takes his job seriously if he can use it to exercise some form of revenge. The fact that Rockwell manages to ground this cartoonishly flawed character into a tragic and funny figure is a remarkable achievement.

Harrelson’s Willoughby is the heart of the film. He’s a flawed man whose tendency to see the best in people leads him to be more tolerant of moral failings than he should. However, his overwhelming empathy and warmth in such a bleak story is a vital part of the movie’s tone and execution. Without such a strong performance from Harrelson, this movie would have been harder to engage with emotionally.

Peter Dinklage’s brief appearance is one of the best understated performances of the year. He isn’t on screen often, but whenever he is, Dinklage’s warmth feels like a welcoming hearth in the cold Ebbing, Missouri. He’s a good man, wrestling with just as much pain as everyone else, but he chooses to follow love instead of the anger and conflict consuming his neighbors. His earnest romantic pursuit of Mildred is one the most heartwarming portions of the film, largely due to Dinklage’s pitch-perfect performance.

“Three Billboards Outside Ebbing, Missouri” revels in the grit and grime of its world, enthusiastically presenting the ignorance and misplaced anger of its citizens, particularly Dixon. Thankfully, there’s a sense of joy in the gloom and complexity that leads to countless hilarious moments of dark comedy. A few too many heavy emotional moments are immediately undercut with comedy, but the movie still manages to leave an impact.

It’s a testament to McDonagh’s confident writing and directing that the moments of genuine heart and connection don’t feel tacked on or tonally jarring in comparison to the rest of the film. All the while, the film addresses grief, death, racism, sexism, love, spousal abuse, mental health and war crimes without ever feeling preachy. It merely presents a deeply broken world, a downtrodden town and an endless series of self-destructive decisions. Viewers can almost hear the soft, loving heart of the movie being suffocated by the resentment and cynicism that defines its central characters.

Despite its harsh and cynical tone, this is a movie about finding joy and letting go of hate. In a time where people across the political spectrum are losing empathy for each other, it’s important for art to show that even the worst among us are capable of good. We all just need to practice a bit of respect and patience to get back on track.