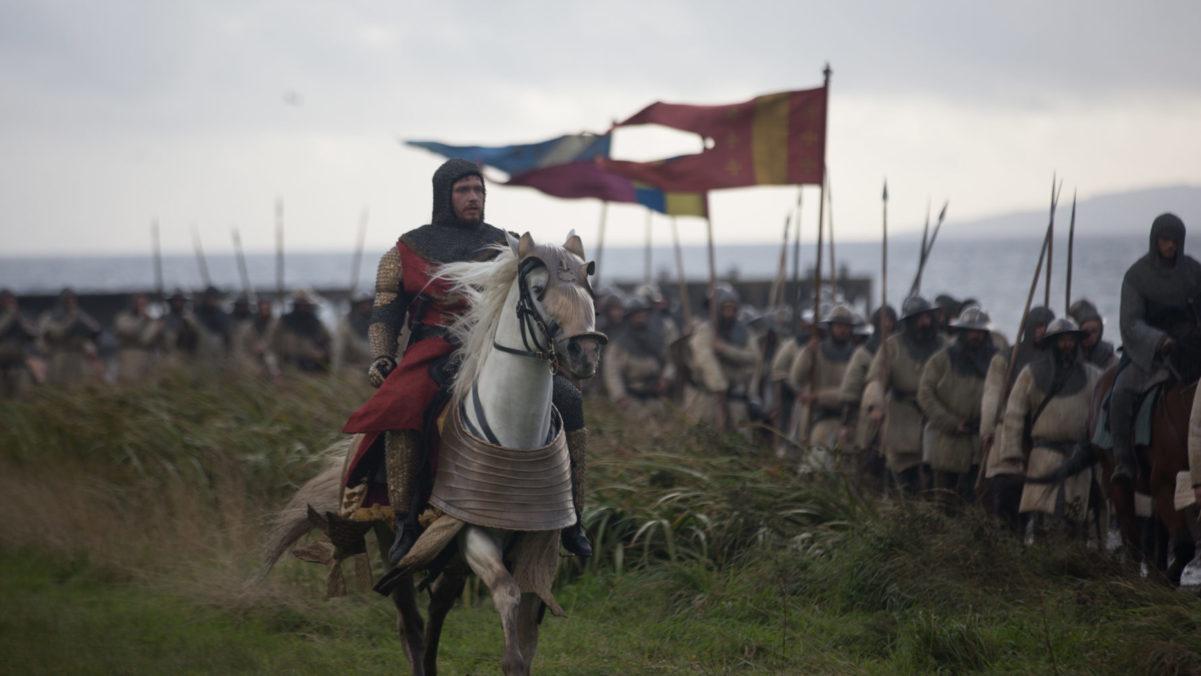 “By these swans, I vow to avenge this murderous insult god,” Prince Edward (Billy Howle) savagely screams as he holds two swans by the neck. This moment is a microcosm of “Outlaw King” — Edward performs a strange ritual, which is never explained, and the men around him wildly hoot and holler as bloodthirst fills the air. The film is permeated by a gratuitous penchant for violence that detracts from the viewer’s ability to invest in the overall story.

“Outlaw King” is a story about Robert Bruce (Chris Pine), a lord in medieval Scotland who finds himself under the thumb of Edward I (Stephen Dillane), a tyrannical king. Robert plots a rebellion against England because he wants to liberate Scotland from Edward’s domineering rule. After murdering a man in a church, Robert struggles to find allies in his quest to unite Scotland. Still, he perseveres and gathers an army and sets the stage for bloody battles with the English forces.

The most glaring flaw is director David MacKenzie’s inability to establish meaningful relationships between the main characters. Edward orchestrates a marriage between his goddaughter, Elizabeth (Florence Pugh), and Robert Bruce. Subsequently, this romance becomes the foundation for the majority of the plot. When Elizabeth is captured by the English forces, she becomes the cliched damsel in distress, and Robert Bruce must save her by staging a successful revolution. But the relationship is constructed inadequately. As a result, the ensuing plot progression fails to resonate with the viewer. At first, the arranged marriage doesn’t display any chemistry or romance. Then, a few brief snippets of Robert’s interactions with Elizabeth lead to a kiss, and the couple’s first display of physical affection feels forced given the lack of the relationship’s evolution. One sex scene with gratuitous nudity later, the characters are apparently soulmates. The whole romance feels contrived, which cuts the movie’s legs out from under it.

Speaking of the loss of limbs, MacKenzie often depends on exceedingly graphic violence in an attempt to make up for the lack of compelling characters and effective storytelling. One character particularly emphasizes both aspects of this imperfection. James Douglas (Aaron Taylor-Johnson) only has one distinguishable character trait: his tendency to scream his name while he kills people. James is the embodiment of the movie’s excessive brutality. Practically every time he’s on screen, he’s covered in blood. None of the countless acts of violence in the film are left to the imagination. In the many battle scenes, blood flows like water and gushes out of every wound. As a result, “Outlaw King” often feels like a gorefest which tries, and fails, to stray beyond that classification.

The movie is worsened by MacKenzie’s failure to bring anything new to the table in a tired genre. The director constructs a film that heavily relies on stale tropes and main characters who are propped up by unimaginative stereotypes. Robert is an outsider who needs to unite disparate armies in order to beat the supposedly evil English empire. The main conflict, which pits Robert’s forces against those of King Edward, feels like a run-of-the-mill David vs. Goliath story because Robert’s men are ludicrously outnumbered. The main villain of the story is ultimately Prince Edward, an insecure son who wants to please his unloving father. Time and again, Mackenzie uses hackneyed ideas without adding new life to them.

Despite its shortcomings, the movie successfully portrays the visual aspects of the medieval time period. The viewer feels as if they were transported over seven hundred years into the past due to the film’s realistic costumes and beautiful set pieces, such as numerous castles and villages that have distinctive identities based on their respective demographics. Prestigious castles are rightfully large and complex. Additionally, breathtaking shots of Scottish mountains often act as a welcome, albeit short, reprieve from the violence. However, one imperfection continually sabotages the movie’s aesthetically pleasing atmosphere. Every battle scene features countless shields and each and every one of them looks like it’s made out of Styrofoam. It’s hard to buy into the fact that one of these shields can withstand multiple flaming arrows when Robert’s men are ambushed by the English.

“I am so sick of Scotland,” King Edward says when he learns of Robert’s rising rebellion. After sitting through this gory two-hour long slogfest, the viewer will be too.