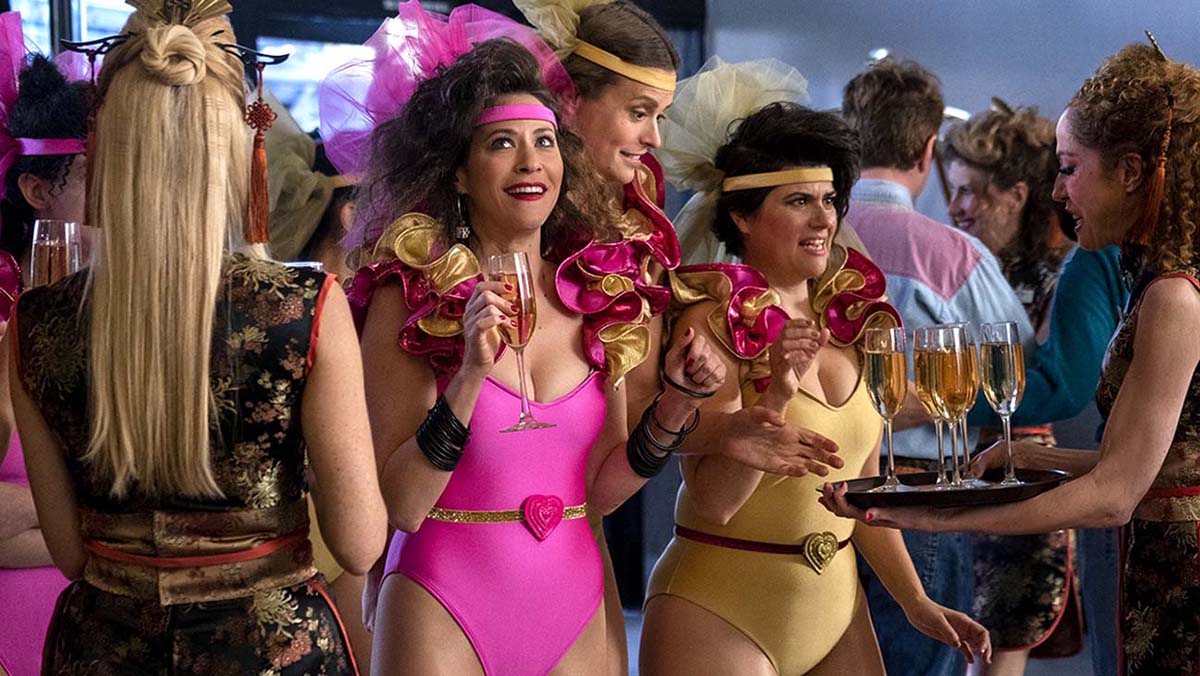 Netflix
Although this season of "GLOW" comes off as a shallow attempt at feminism, the characters are fleshed out and sincere, accurately painting a picture of what it's like to be a woman in show business.
By Gabrielle Topping — Contributing Writer
Published: August 28, 2019

“GLOW,” which stands for “Gorgeous Ladies of Wrestling,” uses a fictional portrayal of ’80s televised women’s wrestling to explore the complex lives of a diverse group of female characters. However, the show’s desire to make a feminist statement fails because the female lead characters are too often used as punchlines.

“GLOW” depicts Ruth “Zoya the Destroya” Wilder (Alison Brie) as a determined actress unsatisfied with the way women are portrayed in film. Ruth’s drama-filled life ends up landing her a role on a women’s wrestling show, also titled “GLOW,” after her best friend, Debbie “Liberty Belle” Eagan (Betty Gilpin), storms into her audition and physically fights Ruth for having an affair with her husband, Mark (Rich Sommer). In season 3, the cast and crew of the fictional “GLOW” are relocated from Los Angeles to Las Vegas for their live show debut. The Netflix series includes stereotypical Las Vegas scenes — drinking, gambling and a mix-up with a male prostitute — that provide glimpses of humor in an otherwise dramatic series.

While “GLOW” is considered a comedy, the series’ humor is an acquired taste; the majority of the humor in this series is at the expense of women. For example, in one tense scene, Ruth lightens the mood by dancing topless in the dressing room and her boss, Sam Sylvia (Marc Maron), walks in on her. While it’s optimistic to view these women as empowered and independent, the viewer must realize that the very essence of the show revolves around women physically fighting each other while wearing skin-tight clothing.

The show does have moments of seriousness when it tackles real-world issues women face. For example, Debbie struggles with feelings of insecurity regarding her personal and professional lives. Debbie feels guilty for being a working mother, especially because she is missing important milestones including her son, Randy’s, first steps. Debbie also experiences symptoms of bulimia — restricting her food intake, exercising excessively and inducing vomiting. She is uber-critical of her appearance and how her figure will affect her livelihood as a performer.

The characters of “GLOW” evolve throughout the season as they explore their identities and become more confident by standing up for themselves. For example, when the wrestlers decide to switch roles for a live show, Jenny “Fortune Cookie” Chey (Ellen Wong) is offended when a white colleague portrays her character by using stereotypical Asian mannerisms. But instead of letting the resentment fester, she discusses the issue with her colleague and resolves the matter.

“GLOW” makes a statement by focusing season 3 on the characters’ evolutions as people instead of solely on their journeys as performers. The characters come off as real women because they are written with authenticity. Although the Netflix series is not necessarily “binge-worthy” due to the lack of cliffhangers, the characters are dynamic. The women are able to fulfill their dreams of being actresses while supporting themselves, even in the unconventional fashion of dressing in leotards and wrestling.