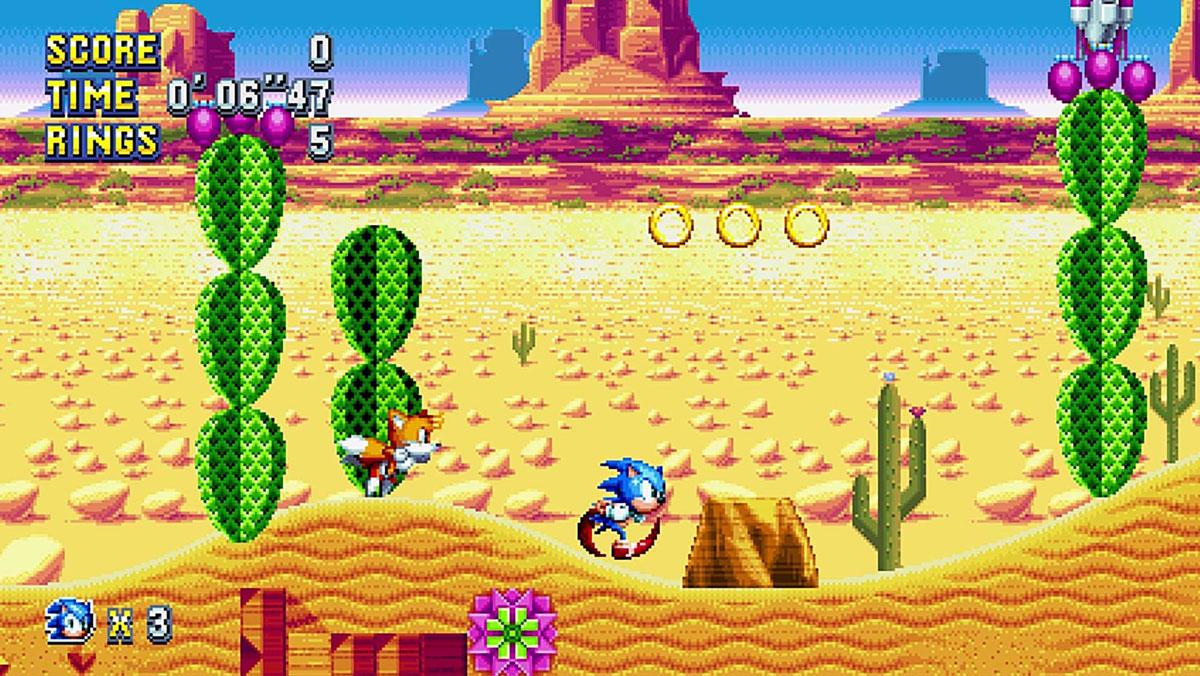 Sega
“Sonic Mania” is a conglomeration of Sonic tropes and fresh level ideas. Classic villains like Dr. Eggman make their return. The game was developed by PagodaWest Games and Headcannon and was published by SEGA Games.
By Matthew Radulski — Staff Writer
Published: September 20, 2017

The 21st century has been rough for Sega and “Sonic the Hedgehog.” Developer Sonic Team has pushed out lackluster game after lackluster game, killing the credibility of its hallmark franchise. By 2017, Sonic Team wanted to focus strictly on 3D Sonic titles and outsourced Sonic to a group of developers who made their name making fan games. The goal was to let Sonic Team echo the original “Sonic the Hedgehog” trilogy. Echo it they did, for “Sonic Mania” is the faithful, beautiful and fun Sonic game fans have been waiting decades for.

“Sonic Mania” is a direct sequel to 1994’s “Sonic and Knuckles,” the final 2D Sonic title on the Sega Genesis. “Sonic Mania” follows Sonic, Tails and Knuckles as they band together to stop the nefarious Dr. Eggman. The goal is to reach the end of the stage as quickly as possible, defeat a boss and move on to the next stage. Very little story is needed in a platformer like this, for gameplay compels the player more than a cutscene could.

“Sonic Mania” is like 12 cc of nostalgia straight to the heart. This is a game for Sonic fans by Sonic fans. Little details, like a miniboss that’s an homage to “Dr. Robotnik’s Mean Bean Machine,” exist strictly for those with a keen eye. For better or worse, this is not a game for non-Sonic fans.

The game’s art style looks like a souped–up version of old Sonic games. Sonic is shiny now, and his bright blueness pops. If the player can get fast enough, they’re treated to beautiful backgrounds and seamless motion. The colorful retro levels are aided by the soundtrack, which is a mixture of remixes and original chiptunes. The music is a marvelous amalgamation of something old and something new, just like “Sonic Mania” itself.

There are three playable characters in the game, each with their own ability. Sonic can use a special shine dash to go extra fast. Tails, who can be Sonic’s sidekick in two–player mode, has the ability to fly and glide around the stage. The third character, Knuckles, is slower but can climb up walls. Each character has their own flavor, but one thing is consistent: They all control quite well. Any mistake in the game is not left to an “a” press that didn’t register or a slope that wasn’t right. The worlds are easy to understand but hard to master.

Though the “Sonic” franchise has always focused on speed, the true triumph of the series is the way it promotes exploration. Each zone takes anywhere between two and 11 minutes to traverse, but there’s a litany of paths through each level. Broadly speaking, the top path is the most difficult and fastest, whereas the bottom is easier, slower and less interesting — a punishment for poor play. The levels in the game are a mixture of remixes of old levels, like Green Hill and Chemical Plant Zone from “Sonic the Hedgehog 2,” and brand-new zones like “Studiopolis” and “Press Garden.” Each zone has its own theme, like water or wind, and tends to switch styles halfway through. The first act of Chemical Plant Zone, for instance, is about staying above water, while the second act focuses on bouncing off the water. A platformer is only as good as its levels design, and the variety of “Sonic Mania” ensures a great time.

The largest issue with the game is its brevity. There are 12 zones in the game, each with two parts and some secret treasures. With patience and some dedication, Mania Mode, the single-player campaign, could be completed in an afternoon. Outside of that is the treasure–hunting and some time trials.

That’s pretty much it. “Sonic Mania,” which is on most platforms for just $20 instead of the standard $60, is a short experience, but a worthwhile one. “Sonic Mania” will not attract new fans because it’s built on a foundation of nostalgia. The nostalgia for the colors, fun levels and eclectic music that Sonic games used to have. The nostalgia for the feeling of wonder that erupts when a difficult level finally ends or when Sonic reaches top speed. The ephemeral joy of old Sonic is here again, for “Sonic Mania” is every bit as good as its pedigree. For the first time in a long time, the future of Sonic the Hedgehog looks bright.

Nintendo’s most beloved characters duke it out in “Super Smash Bros.”