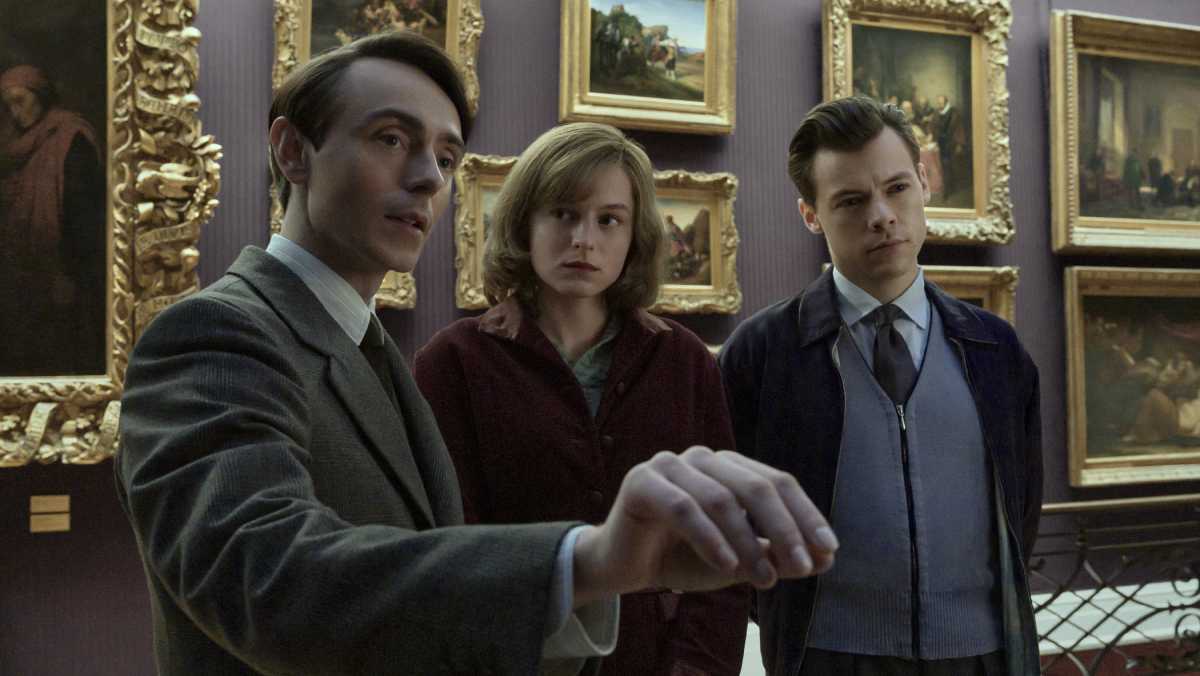 Directed by Michael Grandage, “My Policeman” is a tale of forbidden love set in the 1950s in Brighton, England, told through a recounter with a personal diary that fell into the hands of “the other woman.”

Marion (Emma Corrin), Tom (Harry Styles) and Patrick (David Dawson) all grew to be close friends after Tom introduced his partner, Marion, to Patrick by inviting her to go on a date to Patrick’s art gallery. Little did Marion know that Patrick had already taken a liking to Tom and had made many successful attempts to seduce Tom right under her nose.

The film jumps 40 years into the future, where an older version of Marion (Gina McKee) and Tom (Linus Roache) are living a life that seems to consist of a happy marriage until Marion decides to bring back the man who was once Tom’s lover. Older Patrick (Rupert Everett) had a stroke and despite the history between Tom and Patrick, Marion took on the role of Patrick’s caretaker. In doing this, she discovered his diaries that revealed more about Tom and Patrick’s relationship than she had known.

Freedom is a prominent theme in “My Policeman,” especially in the time period the film is set in and the social roles that each character takes on. Marion is expected to marry a man with a career that can support her despite her wanting to keep her job as a teacher. Tom is a policeman who must enforce cruel and vicious homophobic laws that go against his own beliefs and identity. Patrick is accepting of who he is but is still terrified of losing his job if anyone were to find out about his sexuality. Each character strives to be free while fighting internal battles that go against societal norms and expectations to reach freedom.

The filmmaking techniques are elegant and intimate, especially during passionate sex scenes. The cinematography by Ben Davis focuses on small details, much like a piece of art admired and analyzed in a museum. This adds to the dynamic and diverse visual perspectives that captivate the viewers. The abstract cuts and close-ups of body parts like goosebumps on hands form a connection between the viewer and the characters, allowing the viewer to be immersed in the scene.

Where the cinematography flourishes, the storyline fails. There is much flipping back and forth between time periods and as a result, the viewer does not get to understand any of the character’s internal thoughts besides Patrick’s. The story is told through Patrick’s perspective of his and Tom’s relationship in 1957 and how it unfolded then but does not follow up on any details of that relationship after the fact or how it affected Tom and Marion’s relationship.

There are connective shots throughout the film of older Marion reading Patrick’s diary in the 1990s while the story unfolds in the 1950s. These two time periods are the only ones accounted for in the film, whereas there were over 30 years between the events in the diary and the time older Marion is reading the diary that are completely untouched. No plot is developed for how Tom and Marion spent 30 years together while Tom hid his true self from her. This is where the film lacks in plot and storyline and would be strengthened by the development of the older characters.

Overall, “My Policeman” is captivating and depicts a hopeful tone for LGBTQ+ rights, showing improvement in acceptance as the years go on. The storyline could have been strengthened by diving deeper into Tom and Marion’s inner thoughts instead of showing strictly one side of the whole story. However, the cinematography is enough to hold the viewer’s attention and keep them invested in the storyline.