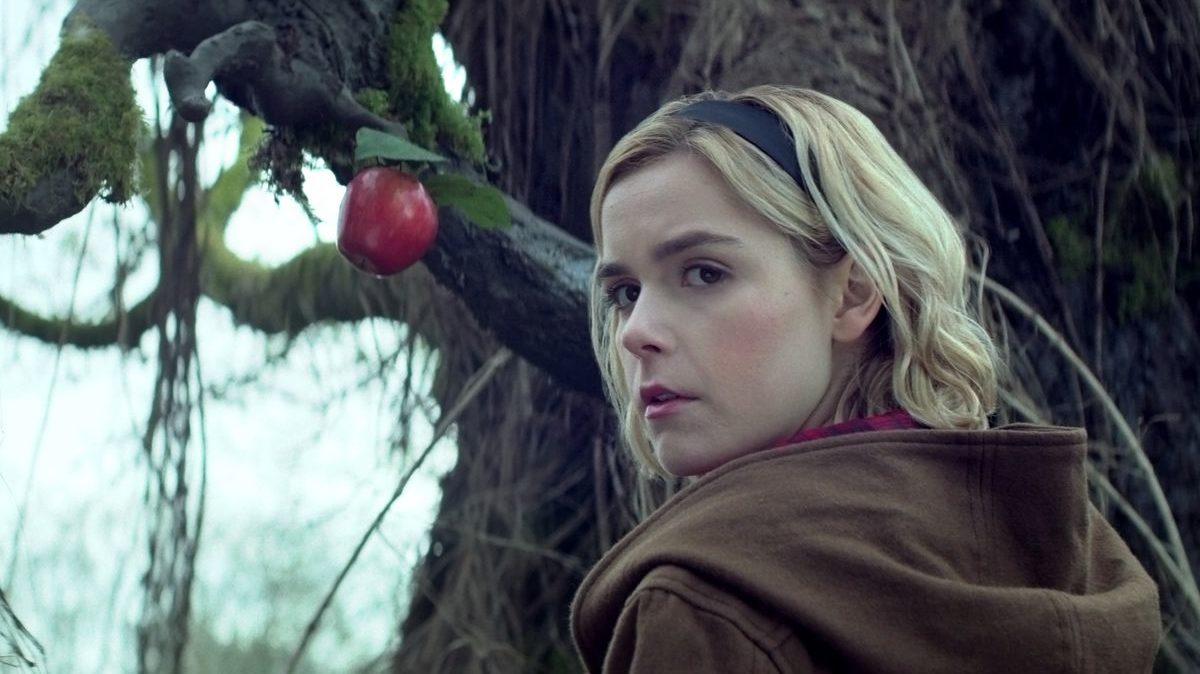 Netflix
Based on the 2014 Archie Horror comic series of the same name, Netflix's "Chilling Adventures of Sabrina" puts a dark twist on the cheery teenage witch.
By Jake Leary — Staff Writer
Published: November 5, 2018

The Chilling Adventures of Sabrina

The Archie Comics media empire isn’t what it used to be. Gone are the days of jolly, simple romances and innocent friendships. Gone are the bright colors and endless charm. And, thankfully, gone are the regressive politics and idealized portrait of high school life — sort of. Netflix’s “Chilling Adventures of Sabrina” follows the same dark path as The CW’s “Riverdale”: taking classic Archie characters and giving them a grim makeover.

Based on the 2014 comic of the same name, “Chilling Adventures of Sabrina” twists the cheery misadventures of the adolescent witch into a macabre gorefest replete with demons, devils and undead witches. Though the premise is the same, Sabrina Spellman (Kiernan Shipka) is a half-witch who has to reconcile her magical lineage with her mortal life, the tone is much different and much darker. On her 16th birthday, she’s obligated to participate in a ritual that will force her to forgo her mortal ties and dedicate her soul to Satan. But she rebels, rejecting the Church of Night and spends the season deciding what she wants to be: mortal or witch.

The show, like its protagonist, is torn between two worlds. On one hand, “Chilling Adventures of Sabrina” follows a monster–of–the–week format. On the other, it tells a serialized story. Neither style is fully explored, causing the series to lack focus and energy. The middle chunk of episodes have little to no consequence on the larger plot and get too bogged down by references to horror classics like Stephen Vincent Benét’s “The Devil and Daniel Webster,” H.P. Lovecraft’s “The Dreams in the Witch House,” William Peter Blatty’s “The Exorcist” and Stephen King’s “Pet Sematary.” There’s a difference between homage and theft; why watch knockoff versions of stories told better elsewhere?

The town of Greendale itself is full of monsters — and not just the kind with fangs and claws. Almost every character in “Chilling Adventures of Sabrina” is irredeemably cruel, violent or idiotic. Sabrina’s aunts, Zelda (Miranda Otto) and Hilda (Lucy Davis), who were sources of joy and comedy in the Sabrina sitcom, are locked in an abusive, manipulative relationship in the 2018 version. Hilda is one of the few optimistic characters in the show, but Zelda repeatedly belittles her, sapping the show of hope and joy. Other characters are similarly despicable — the fathers of Sabrina’s boyfriend Harvey (Ross Lynch) and friend Susie (Lachlan Watson) are bigots, the principal at Sabrina’s school is a predator and the members of the Church of Night are murderous monsters. By the end of the first season, there’s little reason to care about Greendale and its intolerable inhabitants. Let it burn.

“Chilling Adventures of Sabrina,” like many CW shows, makes an effort to be diverse. But the creators forgot that inclusive characters need personalities; hiring people of color and featuring nonbinary characters is a start, but it’s not enough. Neither Sabrina nor the diverse extended cast have complex arcs or motivations. The show makes a point to acknowledge its progressivism, which makes the underbaked characters and muddled politics stand out more than they already do. The clearest example is the show’s effort to chastise women who take down other women, or, in this case, “witches who take down witches,” as a character says early on. But, the entire show is based around the women of Greendale abusing one another. Zelda mistreats Hilda, Prudence (Tati Gabrielle), one of the bullies of the witch academy, harasses Sabrina, and the show’s primary antagonist destroys Sabrina by pretending to support her. Though the show never glorifies behavior, it rarely chastises it either, an effect worsened by shoddy characterization.

Sabrina suffers from a case of bland protagonist syndrome. She doesn’t have a personality of her own, and though she takes an active role in her life, she’s easily manipulated by her enemies. Shipka’s line delivery — a constant emphaticism that makes her sound like an overenthusiastic lecturer — makes Sabrina a singularly frustrating character. She sounds like she’s talking down to everyone she meets: her friends, her aunts, and, at times, the audience.

“Chilling Adventures of Sabrina” lacks cohesion and drive, and while its political messages are admirable, it doesn’t honor the underrepresented groups it depicts. Here was a chance to make a genre show transcend its spooky aesthetic, but Sabrina’s latest outing is nothing more than a muddled rehash of horror classics.