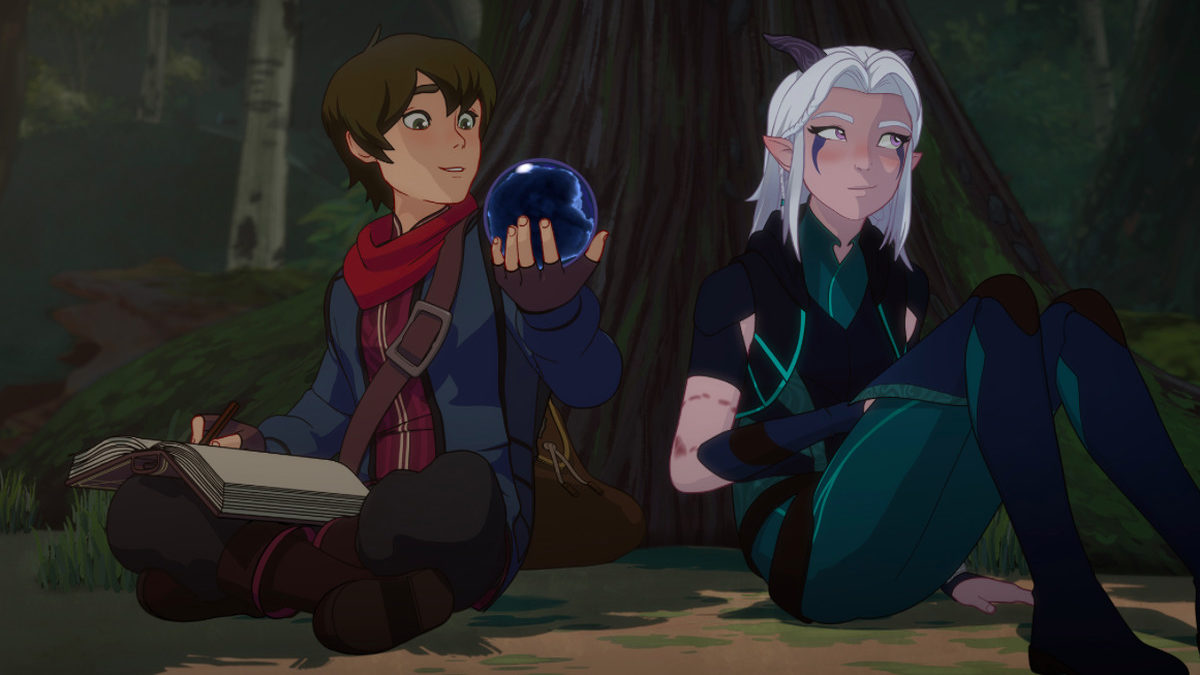 Long ago, Xadia was one land. It was a place where the magical and the mundane could live together in perfect harmony. In ancient times, Xadia had only five sources of magic: the sun, the moon, the stars, the sky and the ocean. One day, a mage named Viren discovered the sixth source — dark magic. His discovery led to the fall of Xadia.

This tale of woe introduces Netflix’s original show “The Dragon Prince.” From the first moment of the first episode, the story is already captivating. Introducing the expansive and fantastical land of Xadia right from the beginning, “The Dragon Prince” is one show that knows how to grab attention.

The deep, complex history of the story’s conflict is presented tactfully through the verbal opinions of various characters. Every side of the conflict is explored, giving the viewer the opportunity to choose which side they stand on. This isn’t the only element that piques interest. The first shot of the show is of strange, magical, birdlike creatures, soaring over a sparkling expanse of water. The shot would already be beautiful in a traditional 2D style, but it is even more dazzling due to the unique 3D animation of “The Dragon Prince.” Only a few shows have attempted animating in this way, including the popular series “RWBY,” by Rooster Teeth Animation, and the 2016 rendering of the 1997 anime series “Berserk,” directed by Shin Itagaki. “RWBY” was well-received by most, garnering a massive fan base, while “Berserk” wasn’t as praised.

Taking into account these notable instances of studios attempting 3D animation, it’s clear that making shows this way is a hit or miss. Approaching a show like this can be dangerous because either it’s sensational with huge fan responses, or it becomes the subject of intense scrutiny. That’s why it makes sense that one of the biggest reservations that come with watching “The Dragon Prince” is the animation. Upon the announcement of the style of “The Dragon Prince,” potential viewers expressed their concerns.

Particularly upset by the announcement, one person even started a petition on Change.org to have Netflix switch the show to traditional animation. Fortunately, despite all of the worry, the decision to go 3D is effective, and it is particularly striking during fight scenes and scenes involving magic. Because of the 3D style, the otherworldly battles and mystical spellcasting feels real. It’s just too bad that it wasn’t consistent outside of those fight and magic scenes. For reasons that are unclear, the animators had to reduce the keyframes in some places, creating moments of odd, choppy movement that looks almost like stop motion. Nobody knows the real reason behind this decision, with only rumors circulating. While this flaw is unfortunate and can break the magic of some moments, it in no way makes “The Dragon Prince” a lousy show.

Director Aaron Ehasz is already well-known for his work. Ehasz was the director, co-producer and writer of the critically acclaimed Nickelodeon show “Avatar: The Last Airbender.” This previous work is well-remembered by many as one of the best television shows of all time and earned a Primetime Emmy Award for Outstanding Individual Achievement in Animation. “The Dragon Prince” might be nowhere near as perfect as “Avatar: The Last Airbender,” but they both carry the same silly yet serious, casual vibe. Peppered with smart quips, fantastic comedic timing and hilarious moments of situational irony, “The Dragon Prince” balances humor with the show’s perilous conflicts perfectly well.

“The Dragon Prince” also carries a cast with beautiful chemistry and characters that all feel genuinely human. The main characters, princes Callum (voiced by Jack De Sena) and Ezran (voiced by Sasha Rojen) and elven assassin Rayla (voiced by Paula Burrows), present a complicated relationship. Rayla, previously set on killing the princes, joins their side and their story unfolds as they learn to trust one another and work together for a common goal. Even the relationships among more minor characters, like the romantic dynamic between General Amaya, a deaf character who communicates through sign language, and Commander Gren (voiced by Adrian Petriw), feel well-done, relatable and meaningful.

A second season for “The Dragon Prince” hasn’t been officially announced yet, but with the first season only being nine episodes long, fans are already hoping for more. Through its animation, story, humor, characters and cast, “The Dragon Prince” has already become a Netflix classic and has snagged the hearts of many with its beautiful tale.