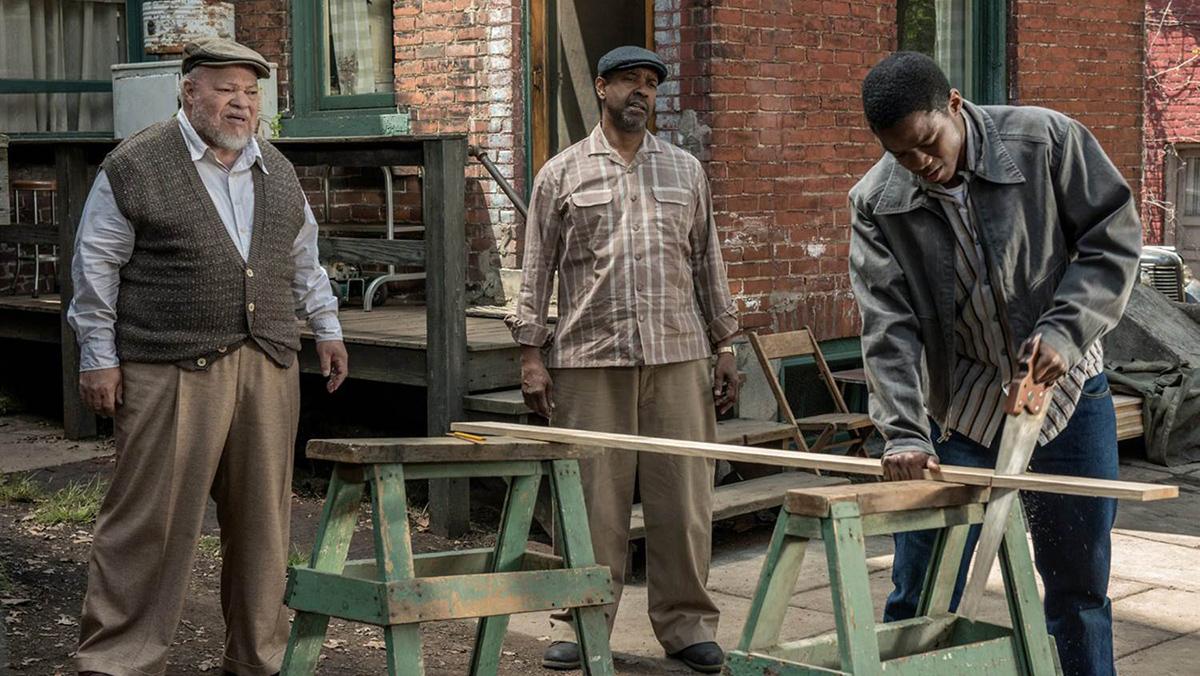 Paramount Pictures
"Fences," adapted from August Wilson's play of the same name, follows a dysfunctional black family living in Pittsburgh as they attempt to reconcile their dreams with the harsh realities of life in the 1950s.
By Colette Piasecki-Masters — Staff Writer
Published: February 21, 2017

“Fences,” a long and fiercely emotional movie, engages its audience in a deep exploration of the life, love and struggles of an African-American couple. The movie earnestly discusses both culturally related issues of race and socioeconomics in the 1950s and current universal difficulties inherent in maintaining relationships. When the characters face conflict, whether over a discussion of money, betrayal or death, the tension is palpable.

Produced by Paramount Pictures in December 2016 and directed by Denzel Washington, “Fences” is based on the Pulitzer Prize–winning play by August Wilson. The film was nominated for many awards, including four Oscars and two Golden Globes. It was also rated one of the top 10 films of 2016 by the American Film Institute.

“Fences” follows the life of Troy Maxson (Washington) and Rose Maxson (Viola Davis) and their intriguing, devastating relationship with their son, Cory (Jovan Adepo). Additional underlying themes infused within the plot include the struggle of living in a society plagued with racism and sexism, and society’s inept understanding of mental illness and death — themes that are still shockingly relevant and universal today.

Because “Fences” started as a play, the slow filming style, featuring unusually elongated scenes, seems to be strategically chosen to mirror its theatrical origin. At first, the film’s style is irritatingly slow. When most of a scene consists of long monologues by Troy and the rest is of him drinking or pacing around the yard, boredom sets in. However, after a mere 10 minutes, the strategic choice for this style becomes apparent: The only thing that’s more noticeable than the pace is the overwhelming volume of Troy’s speech. The pace of the film allows Troy’s dominating personality to remain in the forefront of the film. The viewer watches with mingled horror and pity as Troy suffocates his relationship with his son and, eventually, wife.

The brilliance of this style is realized when Washington’s character is absent, and what is best described as a vast emptiness and silence is unmistakably felt by the characters and viewers. While Washington’s character is maddening and exhausting, he is always compelling. His back story reveals motives that are brutally, honestly human. Despite the inevitable strong negative feelings toward his character, the audience hopes to see Troy gain the emotional ability to openly love his family.

Troy shares heart-wrenching and disturbing stories of his motherless childhood where his father abused him until he ran away at age 14. When his son, Cory, asks, “How come you ain’t never liked me?” the extent of emotional isolation between the father and son is realized. The film continually highlights the effects of this familial relationship, leaving the audience mourning the severely damaged father-son relationship between Cory and Troy, which is also tense with relation to race issues. As a young, aspiring baseball player, Troy had encounters with racism that he claims ended his athletic career, so he does not want the same to happen to his son. However, Cory believes his father is living in the past. In this way, race relations are continually examined throughout the movie. They are brought up through Cory’s intense disappointment with Troy’s decision to restrict his future, or as Troy sees it, actions that are protecting his son from racism.

Rose, Troy’s wife, is the only balance for Troy’s large personality, acting as a mediator and a voice of reason in many situations. Rose represents love and devotion, and provides a vital contrast to Troy’s harsh role as a demanding husband and father. Despite her strength, Rose, too, is suffocated by the wants and needs of Troy, which is especially painful to watch because of her indisputable love for her husband.

Another important part of the film is the building of the fence in their backyard. The symbolism of building a fence is, at first, not apparent, but evolves into a cohesive, deep metaphor by the end of the film. Rose encourages building the fence, representing her wish to hold in and nurture her loved ones, while Troy dreads it, mirroring his lack of commitment to their marriage.

Viewers find themselves fiercely rooting for Rose’s happiness and Cory’s success, simultaneously accompanied with opposing feelings of dislike, pity, and hope for Troy. These conflicting feelings are dissatisfying and represent another displeasing part of the film, but once again, they perfectly represent the multifaceted, realistic qualities of being human. The movie perfectly illustrates that a “good” film does not necessarily have to be enjoyable. In the case of “Fences,” the movie will have the audience steaming with anger one moment and holding back tears the next, all the while providing an emotional, intense picture of the family’s life.

“Fences” is not a movie to watch more than once, but rather a movie that, once watched, will remain in viewers’ thoughts for months to come.