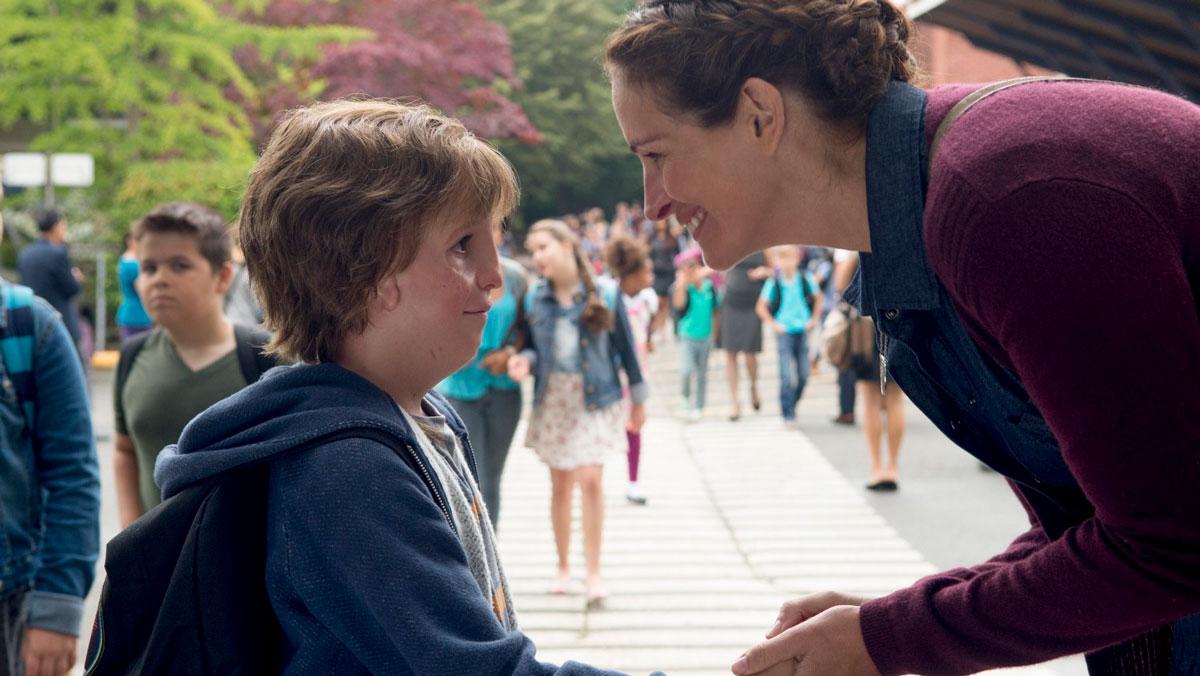 Lionsgate
Based on the Young Adult novel by R. J. Palacio, "Wonder" is the story of Auggie Pullman(Jacob Tremblay), a young boy who comes to terms with his physical disability and fights back against his bullies.
By Cameron Coughlin — Contributing Writer
Published: December 2, 2017

Learning math and science is important, but how do young kids learn empathy and emotional intelligence? How do they learn to be kind to one another? The movie “Wonder,” based on the best-selling young adult novel by R. J. Palacio, attempts — and succeeds — to answer this question.

“Wonder” follows August “Auggie” Pullman (Jacob Tremblay), and his family and friends as he attends school for the first time as a fifth-grader after being homeschooled. Auggie, however, isn’t a typical kid with normal first-day jitters. He’s a talented scientist who dreams of one day going to outer space and whose room is decked out with astronaut gear from floor to ceiling. He was also born with a severe facial deformity.

Auggie has just about the most supportive, loving parents ever: Isabel (Julia Roberts) and Nate (Owen Wilson). At first, school is extremely difficult for Auggie. Julian (Bryce Gheisar), bullies him relentlessly by drawing cruel pictures of him and telling him that he looks like Darth Sidious from “Star Wars.” With the support of his parents, his selfless sister, Via (Izabela Vidovic), and his caring teacher Mr. Browne (Daveed Diggs), Auggie not only survives but learns to thrive in fifth grade. He embodies the film’s tagline, “Why blend in when you were born to stand out.”

Instead of simply telling the story from Auggie’s perspective alone, it’s shown from many perspectives that all intersect to create a dynamic, heart-wrenching story of bravery and kindness. In Via’s story, it’s revealed that her parents have spent so much time caring for Auggie that she has learned to be completely self-sufficient. In one devastating scene, Via finally gets a day alone with her mom, only to be cut short by a call from Auggie’s school informing his mom that he is sick and needs to be picked up.

The plot dips into the stories of Via’s former best friend Miranda (Danielle Rose Russell) and Auggie’s new best friend Jack Will (Noah Jupe). The film backtracks to show pivotal scenes from different character’s perspectives, and the only backstory that felt thrown together and incomplete is Miranda’s. Perhaps one of the most surprising revelations in the film is that Julian is actually heavily influenced by his overbearing parents to bully Auggie. Other family films have attempted to do this, but “Wonder” seems to breathe new life into the idea.

Two of the most memorable supporting characters are Mr. Browne and Jack. While the latter succumbs to peer pressure regarding the way Auggie was treated, he makes up for his actions by sticking by Auggie’s side afterward. Mr. Browne is the kind of teacher everyone wants and the kind of character who adds an extra element of softness and humility to a film. Mr. Browne’s constant reminders to Auggie that he belongs always comfort Auggie, even when he is struggling most. Mr. Browne is a rock for Auggie and his friends, and has a natural instinct of just knowing kids’ true intentions without having to do much digging.

While the ending is predictable in a romanticized, classic Hollywood way, it doesn’t take away from the important messages about acceptance and perseverance at the heart of “Wonder.” This simple and inspiring take on the “be kind to those who are different than you” narrative is sure to be a useful teaching tool to not only middle schoolers, but anyone who needs a refresher.