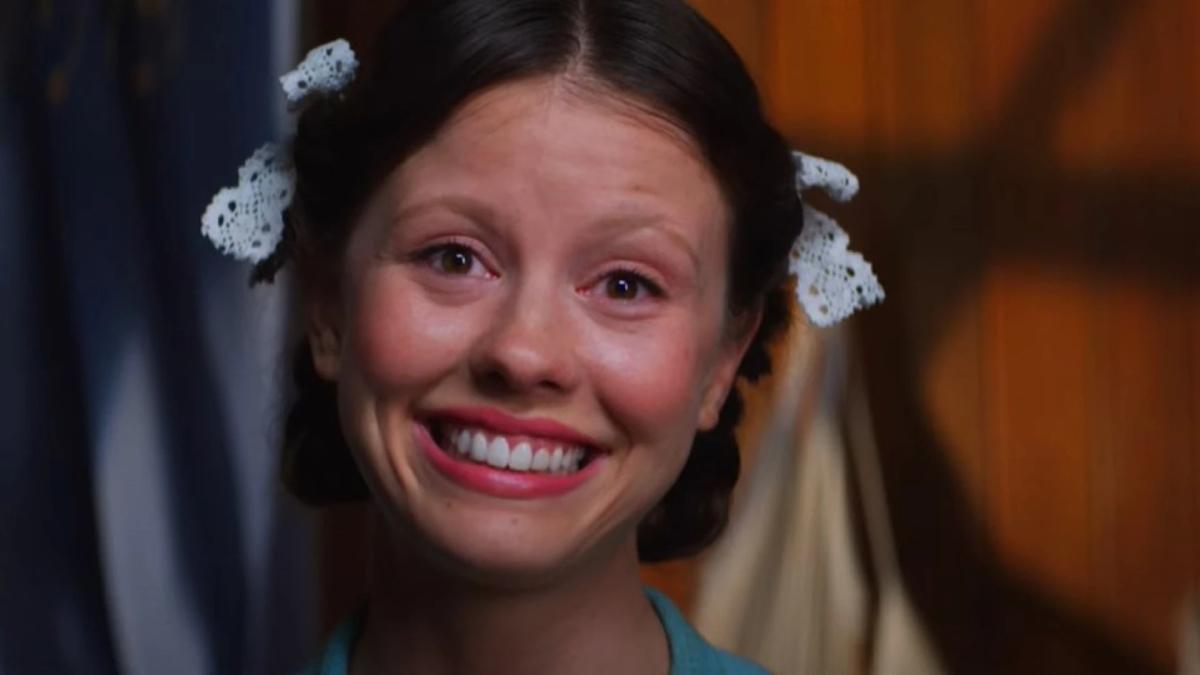 Courtesy of A24
Mia Goth is the titular scream queen of the excellent "Pearl," bringing to life the origin story of the iconic villain of "X."
By Evan Miller — Staff Writer
Published: September 27, 2022

With “Pearl,” writer and director Ti West has secured his “X” horror franchise as a staple of the genre just one year after the original film hit theaters in March 2022. Not only does “Pearl” stand on its own as a strong character study, the prequel movie simultaneously makes “X” even better. In the process, Mia Goth cements herself as a star in the titular role.

It is during the peak of the Spanish flu pandemic in 1918 that “Pearl” picks up on the title character, who is living on her family’s farm with her strict mother (Tandi Wright) and ill father (Matthew Sunderland). Pearl is desperate to leave the farm and make a name for herself as a dancer in motion pictures where she feels she truly belongs. Pearl knows she is meant for more in her life than what she was raised to expect. At the same time, she also suspects that she is not quite the same as those around her. As she commits horrific acts, she begins to wonder if there may be something wrong with herself.

Just as “X” replicated the style of slasher films from the 1970s, “Pearl” replicates the style of films from the 1920s and 1930s to match its enthralling period setting. West and cinematographer Eliot Rockett compose sweeping wide shots of serene, picturesque backdrops that appear as though they are ripped straight from films like “Gone With the Wind” or “The Wizard of Oz.” The lush cinematography paired with the gorgeous musical score composed by Tyler Bates and Tim Williams creates an immersive feeling to “Pearl” that uniquely sets it apart from “X” in tone and feel.

“Pearl” uses its period setting in smart ways to reflect the modern COVID-19 pandemic. While the Spanish flu pandemic is never the main focus of the film, it does provide some clever commentary and moments that make its inclusion feel justified.

While the film’s first half could feel rather slow at times, Goth’s powerhouse performance constantly keeps the viewer engaged. Pearl is an extremely complex character whose descent into madness and murder is at times purposefully uncomfortable to watch. However, Goth’s incredible performance makes it difficult to ever look away. There are several sequences in the film in which Goth is simply haunting in this role, just as she was in “X.” There are two mindblowing scenes in particular toward the end of the film — one of which is a monologue — where the camera simply focuses on her face in an unbroken shot for several minutes. The intense levels of emotion that she is able to convey during these two scenes alone make her performance awards-worthy. Goth truly goes all in with this character to mesmerizing effect.

Not only does Goth star in the film, but this time around, she also co-wrote the screenplay with West and served as an executive producer. For all intents and purposes, she is the face of the “X” franchise. Her work in “Pearl” is nothing short of breathtaking, leaving viewers eager to see her appear in “MaXXXine,” the third film in the franchise that has already been greenlit by A24, and will take place after the events of “X” in a 1980s-era setting.

Whereas Pearl as a character is extremely fleshed out between this film and “X,” many of the supporting characters in the film are not quite as well explored. While Pearl justifiably receives all the attention, it would have been nice to see a couple of the relationships in the film explored a bit further than they were. The largest example is likely the relationship between Pearl and her husband Howard (Alistair Sewell), who is overseas fighting in World War I throughout this film’s entirety. While their relationship is explored well enough in “X,” it would have been appreciated in “Pearl” to see its backstory explored a bit further than it is.

While we learn enough about the supporting players in “Pearl” to care when some of them meet the fates that they do, it can sometimes feel as though certain characters are only being built up to suffer a gruesome death by its end and to further Pearl’s transition into insanity.

“Pearl” presents audiences with an empathetic character study into the mind of one of 2022’s most unsettling characters in film. It does exactly what a prequel should do, adding context to and strengthening the original film while also leaving audiences excited for the next installment.