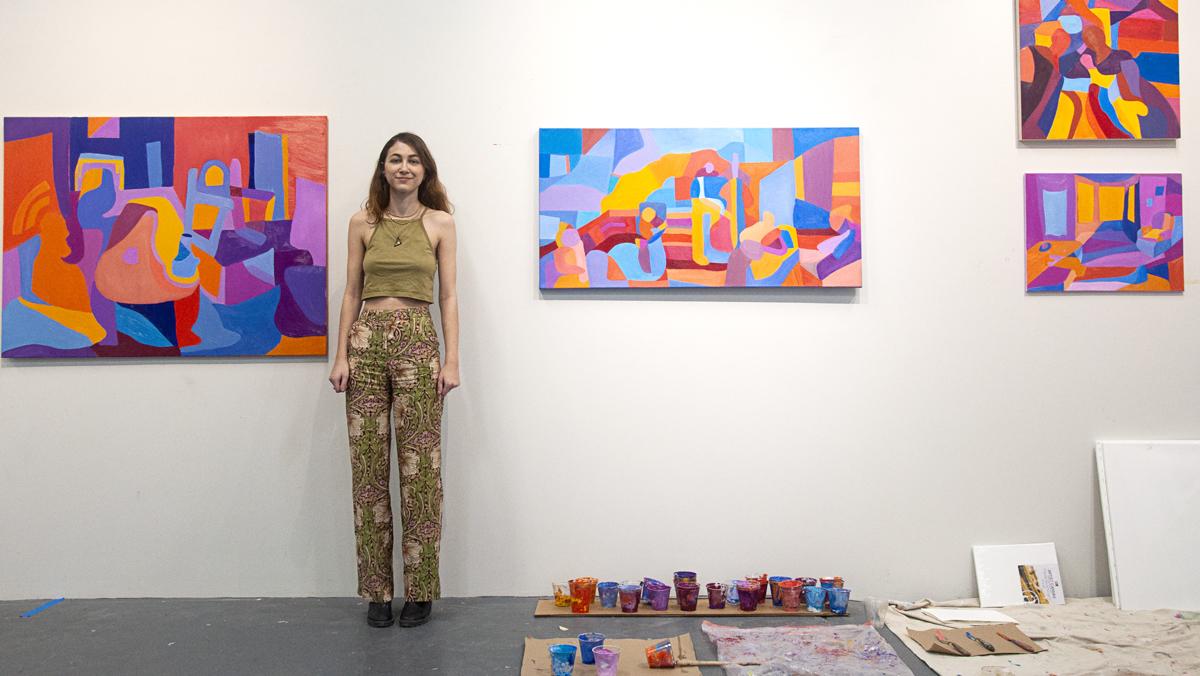 Qiuyang Chen/The Ithacan
Senior Elizabeth Goldberger is a public and community health major, but is showcasing her work as part of an independent study project. Her work portrays colorful spaces in oil paints.
By Liv DiPasca — Contributing Writer
Published: April 16, 2019

Cups of paint and collections of work consume the floors and walls of the South Hill Business Campus’ Creative Space Gallery as students put the finishing touches on their final art projects of their undergraduate studies. They will soon move their work from the Creative Space Gallery to the Handwerker Gallery at Ithaca College, where it will be exhibited from April 25 until May 19 as part of the Senior Student Show.

Every spring at the end of the academic year, Ithaca College seniors are invited to showcase their artwork at the Senior Student Show. This year, the gallery’s final exhibition, titled “Between You and Me,” will present each student’s unique style and artistic voice.

According to Handwerker Gallery Director Mara Baldwin, the title communicates the ideas of all exhibitions from throughout the semester, which have considered the theme of translating ideas through a variety of means.

While some seniors are required to submit their art to the show as part of their final thesis projects as art majors, others choose to do so as independent study projects apart from their majors or independently from academic requirements. The work of seniors Isabel Goldberger, Mia Avramis and Matthew Palmeri will be featured among the group exhibition. The process that each student’s project goes through before the opening is extensive.

Baldwin said that before the gallery can host and hang the exhibition, it must be juried by faculty. Students’ work must look professional. Paintings need to have clean edges, and canvases cannot be warped. After the artwork is judged, it is then Baldwin’s job to make sure the exhibition is professionally installed and opens on time.

Most projects displayed are ever-evolving, semester-long or even year-long endeavors. For senior art major Mia Avramis, it was the latter.

“I went through many stages,” Avramis said. “This work I spent a year on, and originally it was just landscapes, and then I started painting old, kind of falling apart buildings, and then I landed on the subject of my old childhood home. It just kind of exploded from there.”

Avramis’ collection of work will act as her final thesis for her undergraduate study in art. For the collection, she chose to work in oil paints and focus on memories, specifically those of her childhood home in Ithaca.

“I’m hoping that people get a sense of nostalgia,” Avramis said. “Some of the paintings are of the house now as opposed to the house as I remember it 20 years ago.”

Coming up with a topic and idea for the show in and of itself can be energy-consuming, and once the physical creation period of the project starts up, the time and effort dedicated to preparing for the exhibition only increases.

“You pick a mentor to help you, and then you’re kind of on your own,” Avramis said. “I work at least ten hours on this a week. Then, there’s a lot more time spent on it just thinking about it.”

Avramis said seniors are not entirely alone in their efforts. Any student showing work in the gallery chooses a faculty member to mentor and guide them throughout the process. For Avramis, that advisor is Carrie Smith, assistant professor in the Department of Art.

“We meet once a week for an hour, and we critique the art, and then it’s kind of like a therapy session, almost,” Avramis said. “It’s really nice to work one on one with a professor. I think she’s helped me a lot technically with my art but then, also mentally being okay with being an artist because it is a scary thing.”

Students are not the only ones able to gain something from this experience. Smith said that she has enjoyed working with Avramis and that it has been gratifying to see her focus on and organize a single theme for her final project.

“For a student to develop a cohesive body of work is a significant achievement at this point in their development as an artist,” Smith said. “It lays the groundwork for the continuation of their professional practice. I think Mia has grown tremendously this year, and her senior thesis exhibition is evidence of her development.”

Art majors are not the only students allowed to create bodies of work for the gallery and enlist the help of faculty members in producing their projects. For senior Isabel Goldberger, a public and community health major, her exhibition is part of an independent study that fulfills two out-of-major course credits. For her mentor, she chose Sarah Sutton, associate professor in the Department of Art, with whom she has worked closely for some time now.

“I’ve learned so much from Sarah,” Goldberger said. “She’s taught me so much at different stages of my development. I think it’s really cool having one professor who has seen me grow so much. She really pushes me out of my comfort zone. It’s made me such a better artist.”

For her body of work, Goldberger has decided to focus a lot on color and shape within her artwork. Her pieces portray comfortable spaces in Ithaca that she has positive memories of and are constructed with oil paints.

“I’m very influenced by cubism, and I always think about like the breakdown of shapes,” Goldberger said. “That’s the way my mind works. It’s kind of like a game to me — like figuring out where the colors go because I break it down into shapes— and it’s like a coloring book.”

Despite not being an art major, Goldberger has been heavily involved in art from a young age. She interns with Ithaca Murals, an organization centered around social justice issues and dedicated to creating an inclusive landscape that accurately represents the people of Ithaca. Working with Ithaca Murals has allowed Goldberger to combine her passion for art with her passion for change.

Goldberger said that her independent study is her farewell to Ithaca and that she wants it to be comforting and inviting to audiences. She is looking forward to the exhibition, as is Avramis.

“I’m excited,” Avramis said. “It’s kind of intimidating to put yourself out there because each painting is like a little piece of you, but it’s exciting also. ”

Goldberger said the knowledge and growth she has gained over the past semester creating her project has been valuable.

“This year it’s been all about ‘What do I want to paint and why do I want to paint it?’” Goldberger said. “Just because I’m not a painting major, I can still try and be professional and be really good at what I’m doing. It doesn’t matter what job I have in the future, I’m going to be painting.”