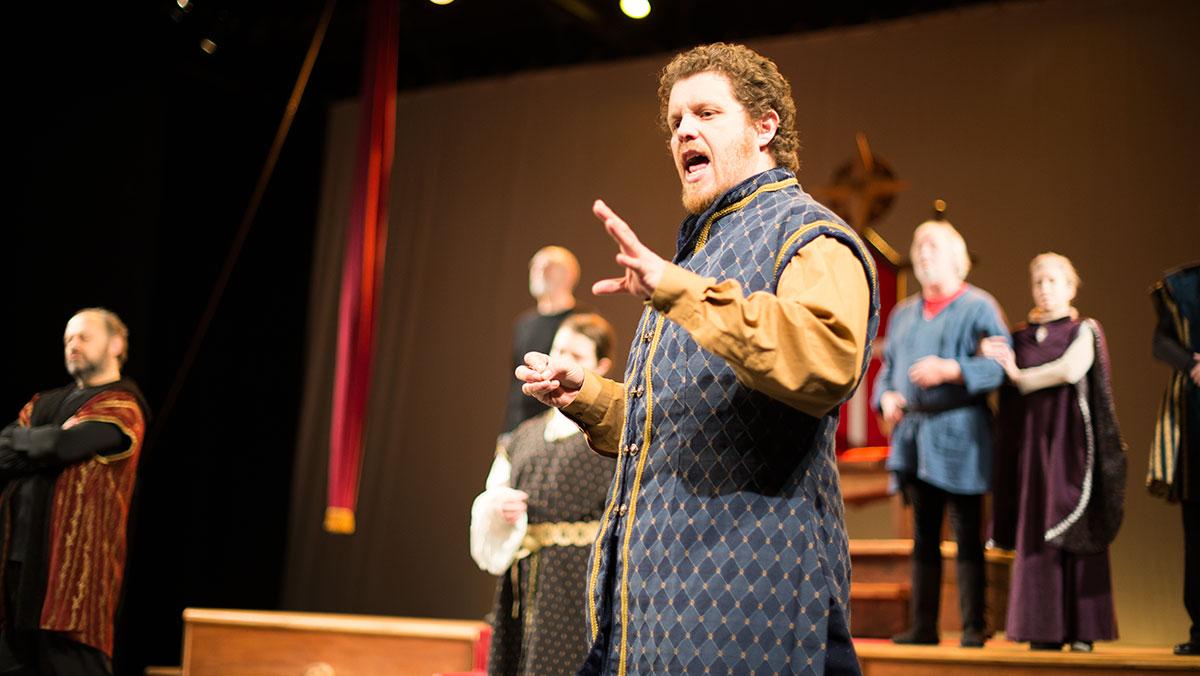 TOMMY BATTISTELLI/THE ITHACAN
Ryan Scammon takes the stage as the Chorus on Feb. 8 during a technical rehearsal for Ithaca Shakespeare Company's “Richard II.” The Chorus introduces the main characters and provides context before the show begins.
By Celisa Calacal — Contributing Writer
Published: February 18, 2015

Ithaca is a town surrounded by natural beauty, populated by the electric energy of college students and pounded by fierce winter weather. Paired with this splendor, beneath all the mounds of glistening white snow, is a town with a thriving Shakespearian culture.

The works of the famous English playwright maintain a presence in the town through companies such as the Ithaca Shakespeare Company and Ithaca College’s own Main Stage productions. The ISC is currently working on a grand two-year adaptation of Shakespeare’s eight English history plays into a five-production series called “The Contention,” kicking off with the premiere of “Richard II” this month at Ithaca’s Hangar Theatre. In addition, the college’s Main Stage Theater will be producing the Shakespeare play “As You Like It” for its Fall 2015 season.

In Ithaca’s Hangar Theatre, the throne of King Richard II sits atop a wooden stage. A red, velvet carpet lines the three steps to the main cement floor, and a gold-fringed, crimson curtain frames the king’s throne from above. The actor playing the uncle of Richard II warns of Richard’s corrupt habits and their consequences on the whole country of England. The king, however, remains stubborn and refuses to listen. Among the similarly red cushioned seats surrounding the stage, directors and stage managers frequently exchange comments in hushed whispers as they intently watch the technical rehearsal unfolding before them.

Stephen Ponton, artistic director of the ISC, said the company’s decision to adapt Shakespeare’s history plays over a two-year span, from 2014–16, commemorates the 450th anniversary of Shakespeare’s birth and the 400th anniversary of the playwright’s death, respectively. Together, Ponton said, these plays form a continuous narrative chronicling the years of conflict over the English throne from the 12th to 16th centuries.

“They’re really kind of wild and violent, and they have a lot of humor, a lot of entertainment value but also a lot of battles and pageantry,” he said. “They have that same feel that modern epic adventures like ‘Game of Thrones’ do.”

Ponton took over leadership of the organization in 2001 and transformed it into a community theater group to make it open to the larger Ithaca community. According to the ISC mission statement, the company strives to combine high artistic integrity with broad audience appeal in all its productions. While some may see a conflict between maintaining the artistry of Shakespeare’s works and making the plays understandable to a general audience, Ponton said he believes there should not be a conflict between the craftsmanship and entertainment value.

“If you really focus on making the language and intentions clear and making it understandable in that way, then it is really compelling and audiences will respond,” he said. “Artistry and popular appeal are two sides of the same coin.”

Beginning in 2011, the company has been producing two productions in rotating repertory every summer at the Cornell Plantations. The company’s performances draw an audience of about 5,000 per year, a testimony to its growing popularity.

Catherine Weidner, associate professor and chair of the Department of Theatre Arts and Shakespeare enthusiast, said she attributes the frequency of Ithaca-based Shakespeare productions to the challenges in adapting these works.

“Theater programs are always going to be producing Shakespeare because it’s like the calculus of theater,” she said. “It’s one of the more challenging things to do, so I think that a community that thrives on culture is always going to have Shakespeare as a part of it.”

Senior Ivy Stevens, theater studies major and current stage manager for “Richard II,” attributed the popularity of Shakespeare to the town’s supportive environment for the theater as well as its educational roots.

“There happens to be a very good theater school in this town with people that are willing and excited to delve into Shakespeare,” she said. “We’re also just a very highly educated town. There’s something about this town that’s very theater-oriented and very arts-oriented.”

Kevin Moss, community outreach coordinator at the Cornell Plantations and a liaison to the ISC, said the presence of Ithaca’s academic and theatrical institutions make for a culturally diverse community.

“It’s a very rich cultural center,” he said. “The audiences are very intelligent and appreciative of the classics.”

Ponton said the ISC is closely tied to both institutions, with strong participation from both Ithaca College and Cornell University students and faculty in the plays’ productions.

Despite being hundreds of years old, Shakespeare’s plays are constantly adapted for the general public by theater companies such as the ISC and Main Stage Theater. Ponton attributes this timelessness to the way in which the characters relate to one another.

“Shakespeare is so popular everywhere still because more than anybody else, he just really captured the dynamics of human relationships in a really compelling way,” he said. “It doesn’t matter what the specifics of the story are or where it’s set — it’s the interactions between the characters. We can relate to them, we understand the kinds of conflicts they’re having and the situations that they’re going through.”

The interactions between Shakespeare’s characters mirror relations among individuals that persist in modern-day society. The corruption of power and the fight for dominance continues to exist in modern society just as it did in the 16th century, and Stevens said the themes in Shakespeare’s works continue to be portrayed in what modern society writes and watches on television.

“All of his stories are stories that we still know,” Stevens said. “It’s love stories, it’s people fighting over a crown, it’s teenagers being stupid and doing dumb teenager things, and parents being obnoxious to their kids and kids rebelling.”

Weidner believes the themes and messages of Shakespeare’s works surpass age and time, referencing the famous “Romeo and Juliet” as an example.

To the modern-day individual, the language and communication between Shakespeare’s characters may be difficult to understand. However, despite the cultural and historical differences between the 16th and 21st centuries, Moss said he often sees parents bring their young children to see these hundred-year-old plays.

“Are they understanding every word that’s being spoken or every phrase that’s being spoken? Doubtful,” Moss said. “But they get the meaning of the story — the essential meaning that’s conveyed through the drama, acting and humor. Even if you don’t understand all of the languages and phrases, you experience the emotions.”

Ponton attributes the continued popularity of Shakespeare in Ithaca to its vibrant community-theater environment and appreciation for theater, arts and literature. All of these lend themselves to sustaining the Shakespeare-fueled activity the town sees with companies such as the ISC.

Ultimately, Weidner said Shakespeare’s portrayal of humanity and emotion lends itself to the everlasting qualities of his works.

“There’s no way those plays would ever not be timely because all he writes about is the experience of the human, so there’s no expiration date on the relevance of what his stories are,” Weidner said. “They’re about things like jealousy, and revenge and ambition and love and trust and betrayal, and those themes never go out of style.”