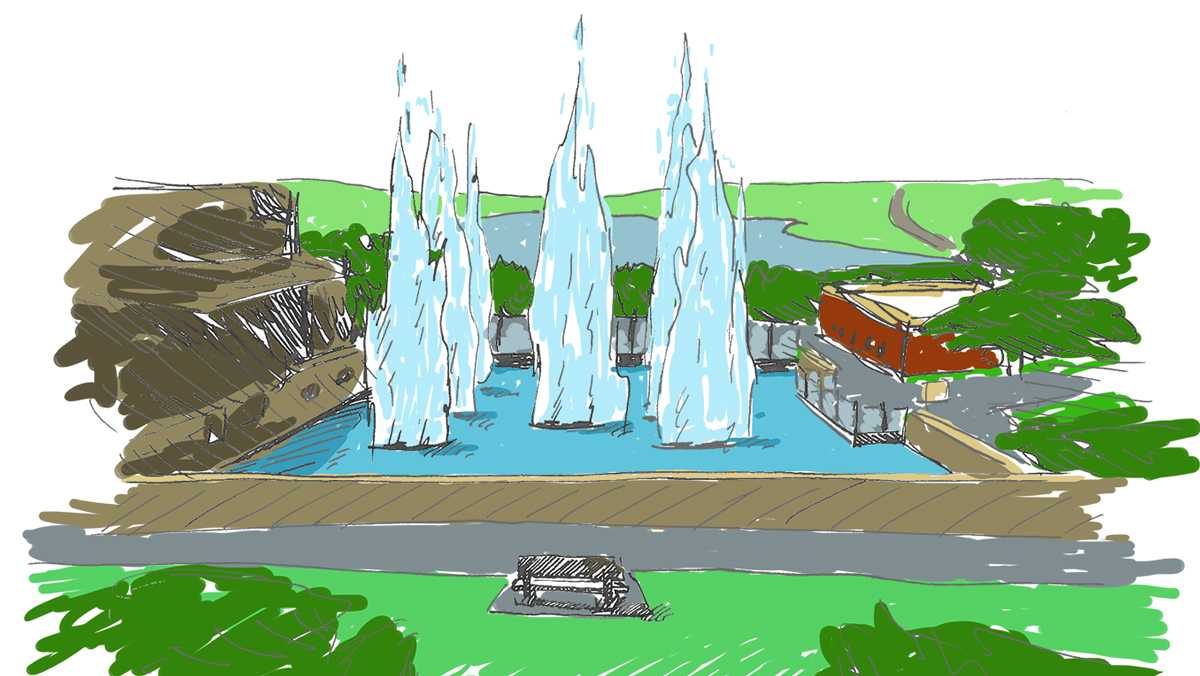 * Editor’s Note: The Ithacan‘s journalistic coverage of the campus often focuses on formal announcements and events. In doing so, we overlook some of the aspects of college that students will remember most. This “snapshot” is the fourth in a series of narrative accounts highlighting the student experience in Ithaca.

In this snapshot, Staff Writer Jake Leary describes the being on campus in the early morning.

That’s the first thing you’ll notice. You’ll step out of your Terrace or your Tower or your Upper Quad (Circles are spared) and get a whiff of whatever the nearest dining hall is cooking. But besides the intrusive odor of meat and spices, the air is crisp and the sky is lightening ever so slightly on the horizon and the roar of college vans has yet to overtake the morning.

There’s no rickety rattle-clack of a Sodexo worker’s cart or thunderous scraping of booted feet. There’s just the deer, the darkened buildings and the smattering of groggy students.

If you stand at the Dillingham Fountain or, better yet, peep through the gap between Terrace 6 and 7, you can see the glitter of the lake and the distant headlights of the cars speeding up the highway. You can see some of Cornell’s old architectural elegance: the tiny, red brick towers and the regal immensity of the dorms. And for a moment, you’ll wish you were there, surrounded by history and dignity. You’ll let your mind wander — away from the essays and tests and mountains of readings — and pretend you live in one of those houses that overlook the gorges (the crushing pressure of Ivy League life is conveniently absent from your Cornell fantasy).

But it’s only for a moment. You have class in an hour. Move.

You’re headed to Campus Center (because nobody goes to Towers for breakfast). A few stragglers wander there too. You’ve seen them before, making their daily trek down from their dorms to the dining hall. Don’t acknowledge them. Don’t wave. Don’t smile. And definitely don’t make eye contact.

You can steal glances at coats or hats, but the face is off-limits. Do you want to be that guy — the creepy guy who stares too long or the freak who says “hi” or “good morning” before 7 a.m.? No, you don’t. There’s no such thing as early-bird camaraderie; it’s more like shared duty, obligation.

As you walk down the stairway from the Towers parking lot, you’re bombarded by the bright, cotton-candy colors of the eastern sky and the high-pitched chittering and cawing of a few intrepid animals. You can see most of north campus in the pastel pink and purple glow, the soft light bouncing off the library and the glass bulk of Center for Natural Sciences. Even the Athletics and Events Center’s massive spire looks elegant, or at least less ugly than usual.

A small cluster of hungry students stands shivering outside Campus Center. The doors are still locked. Across the lawn, another group stands outside the Fitness Center. Their teeth chatter. Their hands also shake. If they’re hungry, they suppress it. You won’t see them for an hour, some sprinting off to class, others ravaging bagels. 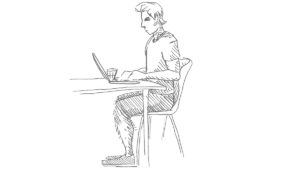 As you settle in with your coffee and cereal, you see a dozen or so familiar faces, the same people set in their early morning routine, moving stiffly, talking quietly, eating joylessly. These are the people who were forced to take an early class or were dragged to a pre-dawn practice. Some of them are a little loopy, talking loudly, incoherently, as if they can combat exhaustion by pretending they never get tired. But you can see the way their eyes droop and the way they fumble with their forks.

There’s the guy who insists on wearing shorts in the dead of February. He sits, pressed against the window, laptop glowing in front of him. He drinks coffee after coffee (you hear he’s trying to cut back, but it doesn’t seem to be going well). There’s the cluster of athletes who take up several tables and babble loudly. There are the loners, the drifters, the people who come, eat and leave.

And then there are the true morning people — the energetic early birds who thrive in that preclass hour. They defy the college student sleep cycle: waking before the sun and tucking themselves back into bed when the clock strikes nine. They’re the first people to push past their postsleep brain fog, the first people to leave their dorms and the first people to enter the classroom. These early birds are different, rare — they live for the routine, the early morning chill and the promise of the day to come.

Some of them even do it without caffeine. Weirdos. 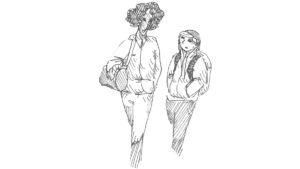 Dribs and drabs of athletes trickle out of the A&E Center in tight groups. You can see them through the big, Campus Center windows. They’re chatting; some smile and seem to bubble over with postworkout endorphins. Others drag their feet, heads drooping slightly.

Even with the influx of athletes the dining hall is only partially filled. There’s still room at the two-person tables by the windows, and the omelet line has yet to stretch into the seating area. In this fleeting moment, you begin to understand how some people like the morning — it’s quiet. It’s calm. Even if you’re groggy or grumpy, there’s no one to impress (anyone else awake at this hour either has energy only for themselves or doesn’t care about the people around them). You can let your mind wander, drifting from memories to ideas to goals.

You don’t need to be clever.

You don’t need to be organized.

You don’t need to be funny.

You just need to be.

And then the remainder of the 9 a.m. crowd rushes in and ruins everything. A flood of frantic students streams into the cluttered room; they bump into one another (and you) as they try to find a seat, balancing cups of coffee, bowls of cereal and plates of eggs in their wobbling hands.

The gentle clank of silverware is replaced by a cacophony of clattering cutlery and too-loud conversations. The sanctity of the dining hall calm is soiled; the magic hour is over.

You’ll check your phone and decide it’s time to leave, stacking your cup and your bowl and trying to carry them to the plate deposit in one trip. Then, out you go (don’t forget a mint — red, not green).

You’ll pass through the too-thick glass doors and past the barely populated Pub. You’ll walk through Textor, the backpack heavy on your shoulders, and think about the class that awaits you and the homework you forgot to do and the tempting warmth of more coffee. You’ll think about your bed — unmade, books and pillows and blankets strewn everywhere. You’ll think about how nice it would be to go home and sleep. 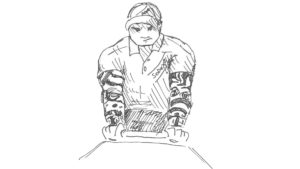 A Sodexo employee with big, tattooed arms and a hard stare pushes a cart of creamer and coffee down the hall. You’ll try to dodge him. You’ll fail. Both of you will feint in the same direction, then you’ll try again. It’ll be awkward.

And then you’ll check your phone. It’s 9:01. You’re late. You should move. You’re so close. The others around you realize the same thing, and your collective death march speeds up slightly.

Into Friends. Up the stairs. One flight, two flights, three flights. Turn. Speed walk. Open the door. Throw your bag down. Avoid eye contact with your professor. Open your laptop.