Sophomore Nicole Marino leans over her roommate’s Ouija board, instantly entranced by the mysterious game. Marino’s roommate, sophomore Jess Schrading, teaches Marino how to play by navigating a small heart-shaped tool, a planchette, across the board. As Marino gingerly rests her fingers on the planchette, it glides across the plastic board, spelling out a word by pausing on each letter.

Since this experience a year ago, Marino’s fascination with Ouija boards has only increased. Now, she builds them.

Though Marino started her independent business in September 2016, she has already designed 54 boards that are sold on Etsy, an online marketplace where artists can sell their products through the shops they create. Through her online shop within Etsy, called PositivelyMystic, she also sells planchettes, wooden necklaces and rune stones. Marino constructs the boards at the Ithaca Generator, a makerspace in downtown Ithaca where people go to work on projects, use tools and share ideas.

The origins of the Ouija board, originally named the Talking Board, are not quite as mysterious as the board itself. These talking boards, used to summon spirits, first became famous in 1886, when it was reported they were being used at spiritualist camps in Ohio, according to the Smithsonian.

The first real Ouija board business arose in 1890, when a businessman named Charles Kennard foresaw how profitable the talking boards could be. He named the business the Kennard Novelty Company. Kennard renamed the talking board the Ouija board after he claimed to have learned the name from a session with the board.

Ouija boards became a point of public fascination in the early 20th century. People began consulting the boards for odd and sinister purposes. A woman left her mother’s body in her house for over two weeks before burying her on the orders of her board; a New Jersey man joined the Army after communicating with a Ouija board, and the New York police once consulted a board in vain to track down a dangerous criminal.

The board eventually became normalized in American pop culture. Parker Brothers picked up the game in 1966, and soon after, Ouija boards were outselling Monopoly. The boards became mainstream and easily accessible. A shopper can purchase a Hasbro Ouija Board for $20 or less at Target or Amazon, or countless other major retailers.

After her interest was sparked by her roommate’s Ouija board, Marino said, she looked into buying a board herself but was disappointed by the options. 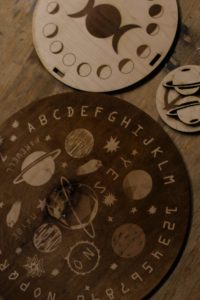 “I was really curious about buying one, and I knew the only place I could really get one was Wal-Mart,” she said. “It is a Hasbro board game, and I was like, ‘This is really childish; it doesn’t feel genuine.’ I looked it up, and to get a handmade wooden Ouija board was at least a hundred dollars because people would carve them by hand.”

To counter the price of other Ouija boards, Marino sells her boards for less than $25. Instead of carving the boards by hand, she uses a laser cutter that the Ithaca Generator provides for free. The machine cuts the wood and etches her computer-designed template onto the board.

Marino first learned how to use a laser cutter when she participated in the Make Better Stuff Workshop, a class offered by the Department of Environmental Studies at Ithaca College. In the workshop, students look at how the rise of desktop manufacturing has created new tools for people all around the world. The work will be offered Fall 2017.

Xanthe Matychak ’95, who founded the lab at the college and is the assistant director of the Hardware Accelerator at REV Ithaca, said she was pleased to hear about Marino’s creative application of this new technology.

“One of the things that is happening because these tools are available to people is that they are able to open up these side businesses or Etsy stores like Nicole has, where they are combining fine art and crafts with pretty high-tech production technology,” Matychak said.

Matychak said she usually has at least one student in every class who ends up joining the makerspace at the Ithaca Generator, including Marino. Matychak said it’s more accessible to artists because it doesn’t have to be too intense a commitment.

“It doesn’t have to be your full-time job — you can make beautiful things that you’re proud of and have it just be a side business or an Etsy shop through a local makerspace,” she said. “That’s what Nicole is doing. It’s kind of a dream outcome of the class.”

In her free time while in high school, Marino had a two-year business painting and selling T-shirts on Etsy. During this time, she taught herself business skills she uses now, including how to keep a spreadsheet and how to run her own finances. While Marino said she loved making shirts, she had to end her business when she got to college because of the time it took away from her studies.

The freedom of making Ouija boards is an aspect of her business Marino said she enjoys. Not only is she able to pursue her creative side, but she also decides her own hours and figures out her pay. Finding the time to come up with the designs, she said, is one of the hardest parts. It takes her roughly one hour to design and construct a board.

Early Ouija boards were simple: They featured the “yes,” “no” and the alphabet, but little else. Marino defies traditional designs with her boards — for example, one of them is covered with images of flowers and herbs. She said she is particularly fond of it because it contradicts the ominous stigma of Ouija boards that are shown in the movies.

Marino often finds herself inspired by images she finds, which she then traces and transcribes onto her computer for the laser cutter to cut out one at a time.

Marino said her time at the generator varies by week. She said she often does homework while waiting for the generator to finish etching. Her time spent there can be a little boring, she said, but she loves being part of the community atmosphere that exists at the generator. 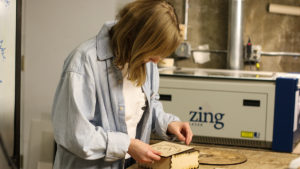 Though she said she is pleased with how helpful and friendly the community has been, she is disappointed at the lack of gender diversity that exists there.

“The one thing, though, is that there is not enough women down here,” Marino said. “I would like to see more women. We need more female makers.”

Besides selling her boards on Etsy, Marino works with two other stores in Salem, Massachusetts, a town known for its historical witch trials. She said she likes being able to work with the stores and customers.

“I work with witches,” she said. “Half of my customers are some sort of spiritual denomination.”

When customers buy a board from Marino, they also receive a booklet she created with instructions on how to play. Senior Rachel Huley bought one of Marino’s boards to give as a gift to her boyfriend. When she played, she found the booklet to be helpful and appreciated how authentic the instructions were.

“It tells you to burn sage and all these things … so it’s not just like kids playing around,” Huley said. “She really looked into the spirit of it.”

Though Marino said she loves being involved in something she’s passionate about, she’s unsure if she will continue her business after college. However, she said she sees herself doing something that incorporates both her love of art and business in the future.

“If I’m doing this, who knows?” she said. “I will definitely be doing something though.”