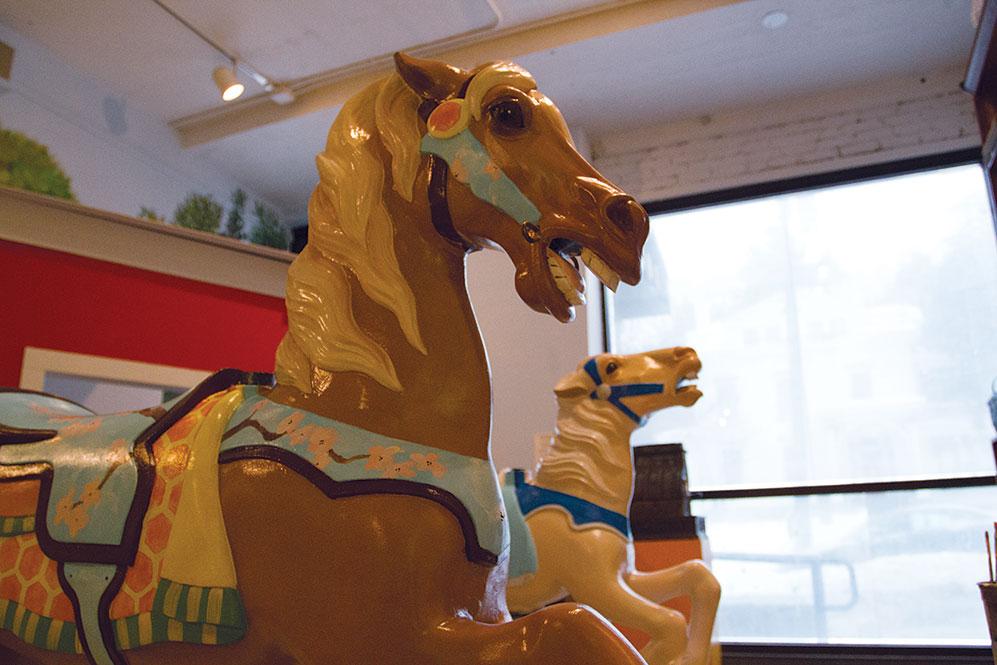 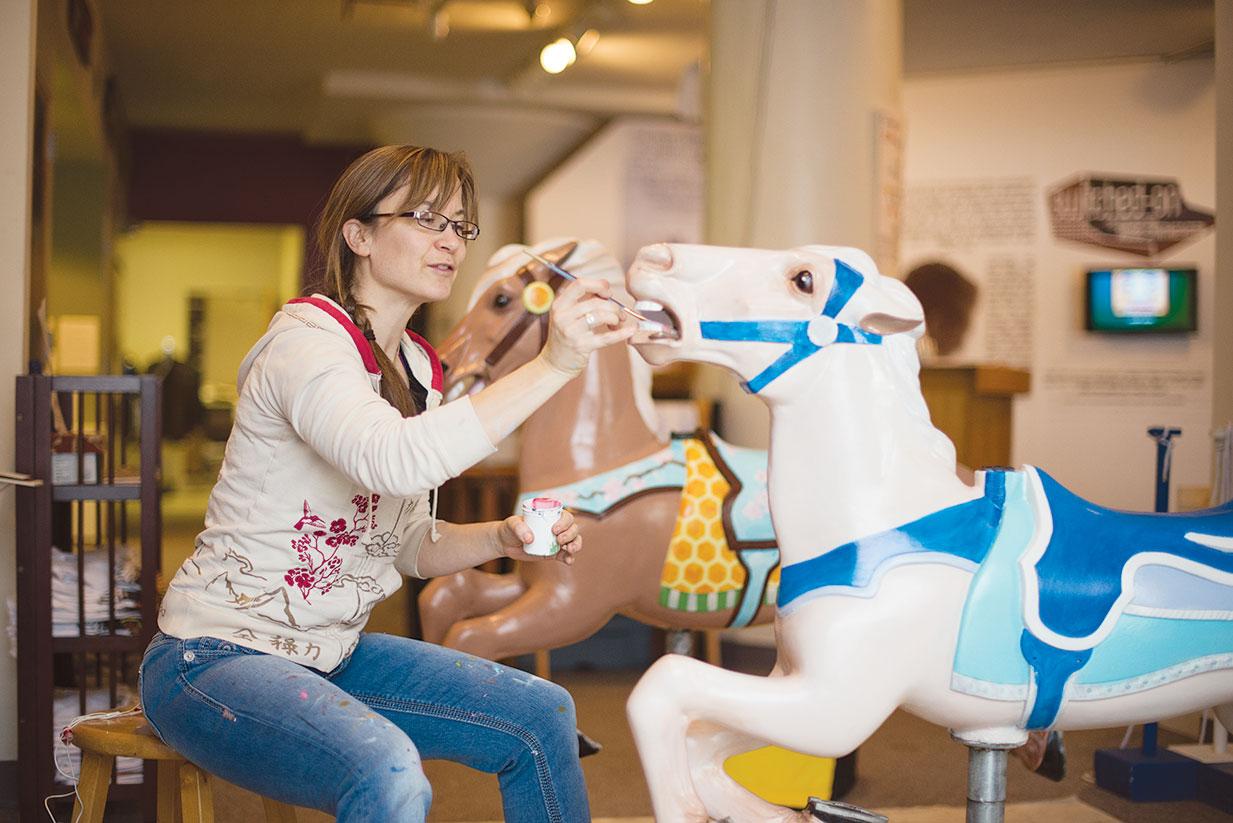 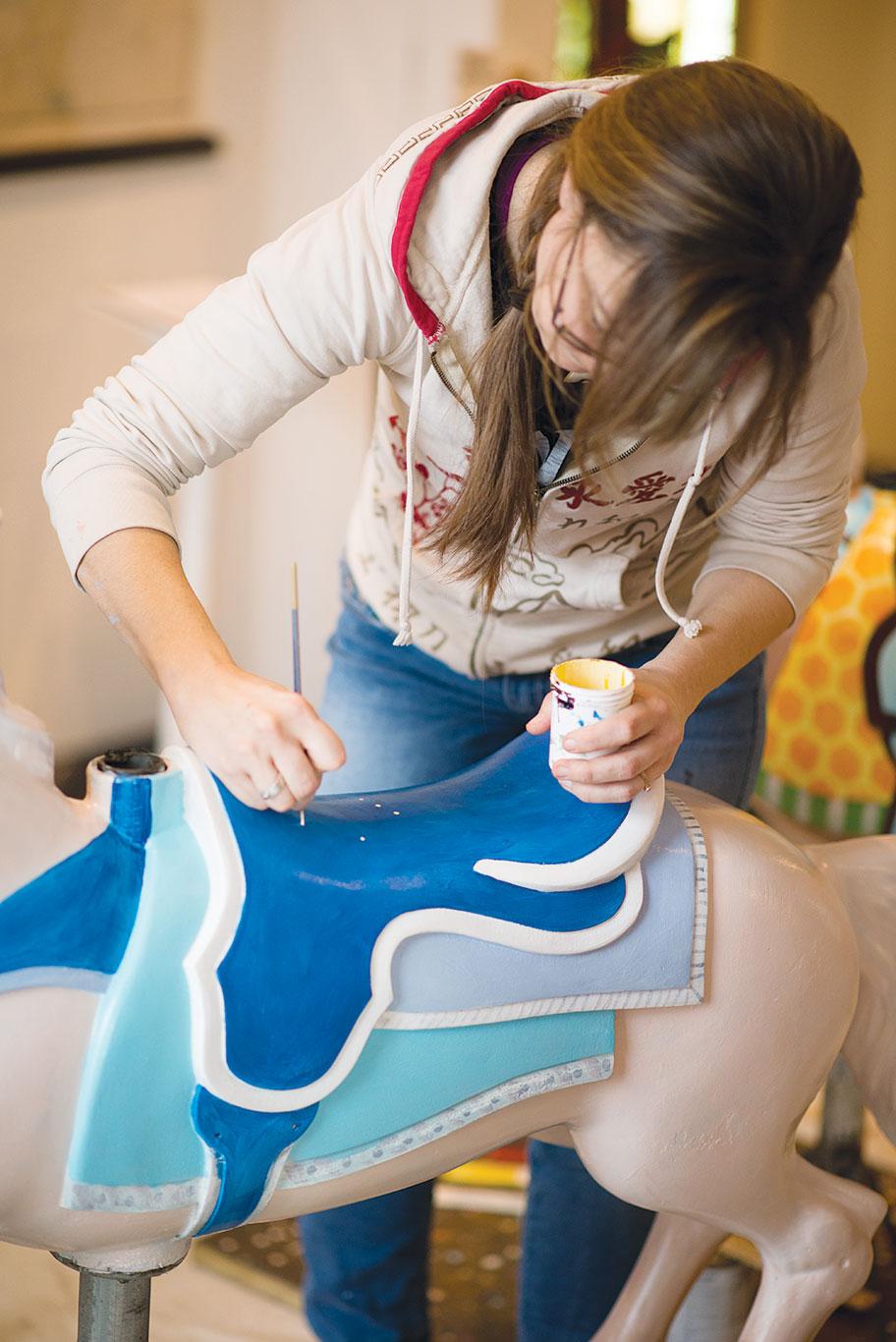 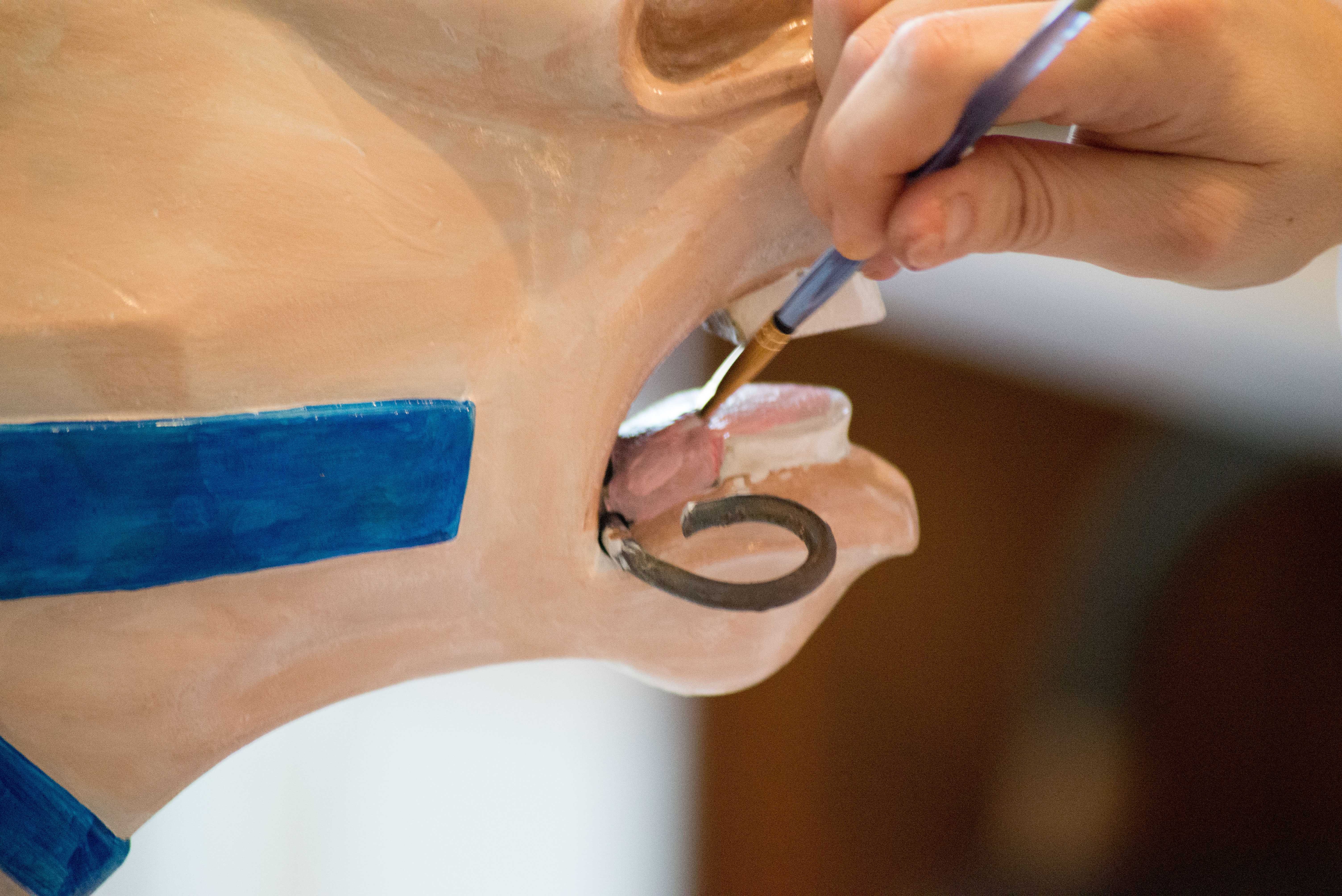 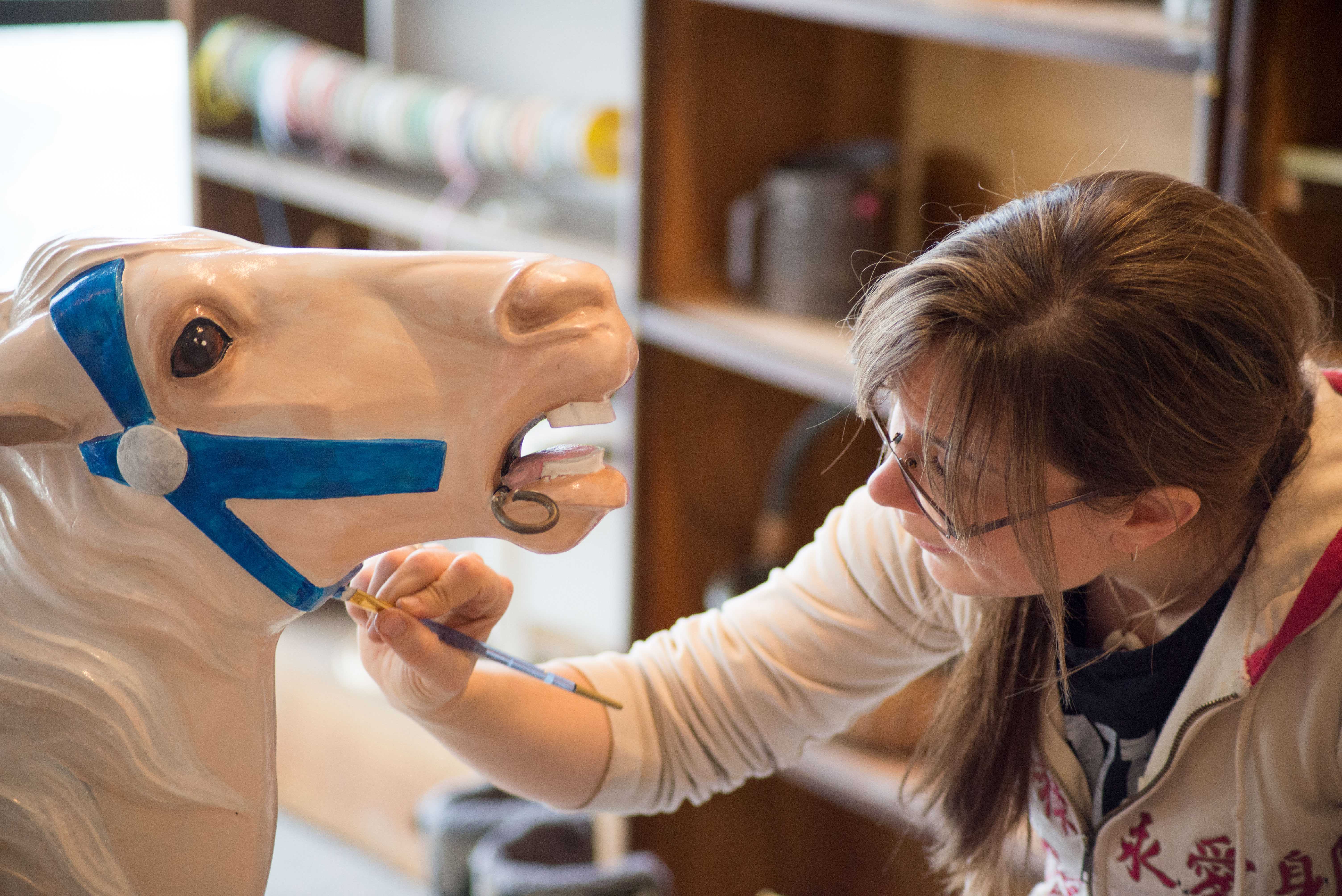 <
►
>
Each of the horses are painted with high attention to detail, down to their tongues and teeth. Here, Sobel details the jaws of one of the 30 horses that will be restored. These horses will debut in May, when the carousel reopens. (Tommy Battistelli/The Ithacan)

Through the windows of The History Center in downtown Ithaca, two artists can be seen stooped over several historic-looking carousel horses. They are painting the intricate details that turn tarnished cast aluminum into a leather saddle or a colorful embroidered blanket atop the textured coat of a stallion. For many long days, Christi Sobel and Julia John, two local artists, work on their new project of repainting the Stewart Park carousel horses.

Originally built in North Tonawanda, New York, by the Herschell Spillman Company and later installed in Ithaca in the early 1950s, the Stewart Park carousel has been a part of the community and a favorite family destination for generations. However, it has been more than 28 years since its horses were last painted, and their hides and saddles have become faded and chipped.

In the summer of 2014, Jeanne Grace, a forester for the City of Ithaca, mentioned in the Ithaca Journal how wonderful it would be to have the horses repainted. After reading this, Sobel and John, both natives of Ithaca, teamed up to restore the original vibrancy these historical horses once radiated.

Sobel is a freelance artist and scientific illustrator. John is a sophomore art student at the Maryland Institute College of Art. The pair began the process of sanding, priming and washing the horses in preparation for painting in mid-July 2014, and teamed up with Friends of Stewart Park, a nonprofit organization, to create a plan for fundraising. Grace, who had hoped to see the horses repainted, said the project was a commitment between artists and donors alike.

“It’s really a gamble, and that’s why I say it’s a labor of love,” Grace said. “They’re only being paid from the money they make through donations … and they are willing to take that chance because they really want to see the carousel painted. I think it’s really an amazing commitment the two of them have made.”

Sobel and John have worked in different public locations in Ithaca throughout the duration of this project. They began at Stewart Park and are currently working in the History Center at 401 E. State St. The artists have expressed gratitude toward their numerous hosts’ hospitality, and said they value the conversations they have with community members who stop to share their memories of the carousel. Ultimately, this project has become much more than a restorative effort. John said their work has resulted in a resurgence of community support and aid for the carousel.

“A lot of people remember riding the carousel when they were kids or taking their own children there or their grandchildren,” John said. “People are really happy it’s being restored.”

The actual process of painting the horses is laborious. Sobel and John estimate each horse has taken about 8–12 hours to paint, not including time spent priming the horses. Despite the long hours, they have made it to horse No. 19, and said they are hoping to be done with all 30 horses when the carousel is set up in Spring 2015.

In keeping with the Stewart Park Carousel aesthetic, which aimed for life-like depictions of the horses, Sobel and John have painted each horse as realistically as possible. Nonetheless, each has a distinctive personality indicated by color choice, detail and texture, and the painters exercise artistic freedom by creating each horse with a different theme in mind.

“When little kids ride the carousel, they’re going to tell themselves a story about the horse they’re on,” Sobel said. “They’re going to have a favorite horse.”

Sobel said she has more themes in mind than horses needing to be painted. She has done research so she can paint the horses as realistically as possible. For example, Sobel created a Native American–painted war horse. The coat of the original horse was cream colored, but time had turned the coat slightly green. Sobel said the process of restoring these horses demands awareness of the content and history of each horse.

“I started with making her a realistic Appaloosa, dark brown with those distinctive white and brown spots on the rump,” Sobel said. ”Then a leather saddle and patterned blankets in Southwest colors, added some eagle feathers, and then I did some research on symbolism and traditions in horse painting.”

These symbols include a circle around the horse’s eye — symbolizing clear vision — lightning on the legs to indicate speed and a left handprint on the hip, which indicates that the horse has brought its rider back safely. Ultimately, Sobel said it’s restoring the horses to their previous likeness that inspires her and John.

“It’s been a real pleasure working on the horses — I love putting together such a big project,” Sobel said. “My favorite part is putting the little sparkle in the eyes. … I really love bringing them back to colorful life. I can’t wait to see the whole carousel bright and shining.”