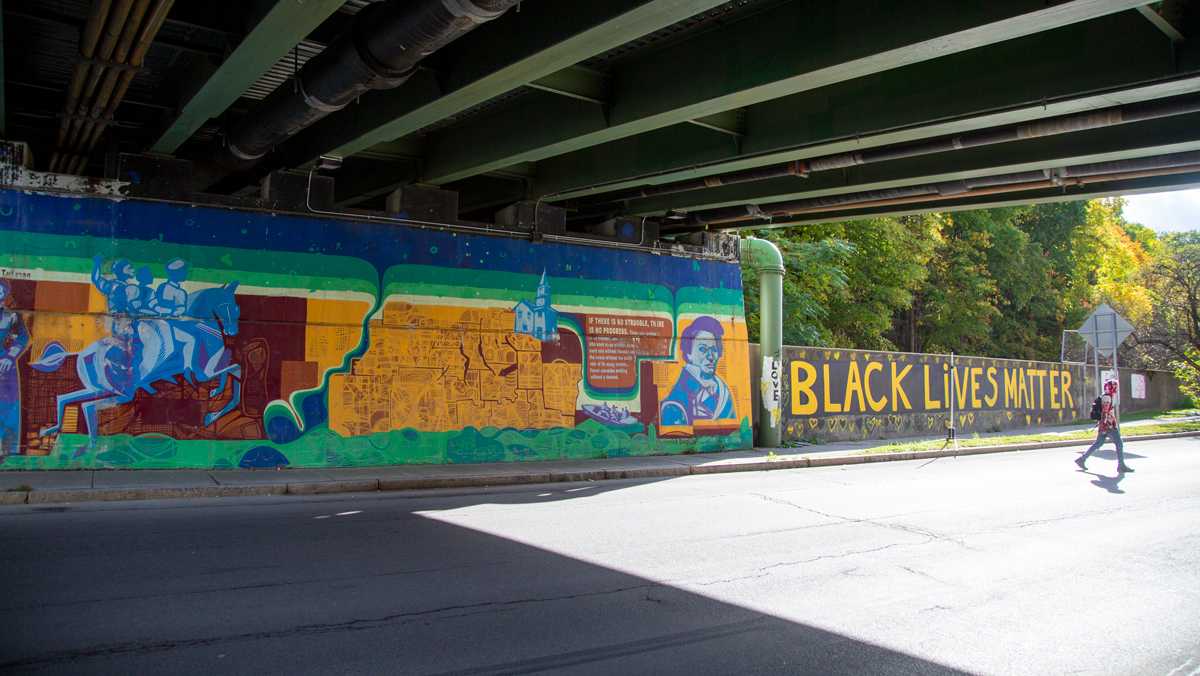 Bold, bright colors express even bolder ideas at the Underground Railroad mural displayed beneath the Aurora Street bridge on Green Street. The mural showcases paintings of slaves on their journey to freedom, along with portraits of abolitionists Harriet Tubman and Fredrick Douglass. Originally painted in 2010, the mural was created as a way to honor these important figures, as well as Ithaca’s role in the Underground Railroad. Saint James AME Zion Church, located in Downtown Ithaca, was an Underground Railroad station and important transfer point for slaves en route to Canada.

Ten years after the original mural was painted, it is being revitalized by four local artists, including Ithaca College senior Cyepress Rite, an integrative studies major with a focus on the “art of resistance in gender Blackness.” Rite said the founder of Ithaca Murals, Caleb Thomas, encouraged them to join the team based on the similarity between the Underground Railroad project and a separate mural Rite will be working on in Muller Chapel with senior Daniela Rivero, an integrative studies major in social movements and Latin American studies. Rite has since been working with fellow artists, community members and organizers from Ithaca Murals to form a design for the mural’s restoration.

Rite said that they want to use this project as a way to honor the stories and history of the Black community in Ithaca.

Ithaca Murals held a fundraiser from Aug. 16 to Sept. 5 on its website with the goal of raising $20,000 to pay for preliminary wall repair, painting materials and compensation for the artists. So far, $6,931 has been raised, according to the Ithaca Murals website.

Local artist Terrance Vann is another contributor to the Underground Railroad mural. He said that he moved to Ithaca from Delaware at the beginning of the pandemic because of the unique art scene that enables him to work on social justice pieces freely. Vann said that he is also hoping to finish a mural for the Ithaca ReUse Center. He said these projects have helped him realize the importance of art, especially given the divided state of the country in terms of racial justice and the upcoming presidential election.

“I think something that all human beings need is creative energy, whether they’re making a piece of art or observing a piece of art,” Vann said. “Seeing people drive by or honk their horn or come up and just say, ‘Hi, it’s transforming the whole area,’ or how they get a feeling in their chest or in their heart when they look at it just reminds me this is a universal language. It’s just so important at a time like this where there’s so much division and hate.” 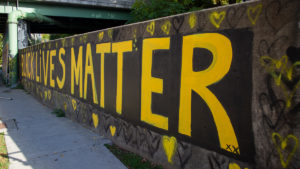 A Black Lives Matter mural next to the Underground Railroad mural under the Aurora Street bridge. Jill Ruthauser/The Ithacan

However, using murals for social change has come with challenges as well. The Black Lives Matter mural, organized by Harry O’Smith, founder of Black Hands Universal, and painted by members of the Ithaca community Aug. 22 at the intersection of Plain Street and Martin Luther King Jr. Street in Downtown Ithaca, was defaced Oct. 4. The word “Black” was covered with paint. The next day, members of the community gathered to restore the mural.

Rite said that this hateful act of vandalism forced them to think about the Underground Railroad Mural being defaced.

“It’s not even about the visuals necessarily,” Rite said. “It’s really about the narrative and the energy. Say that does happen, I’ll be out there the next day repainting it anyway because I feel like it’s to be expected that when the expansion of the liberation movement starts to become very kinetic and very explosive in this way that there’s also going to be an increase in the pushback. I can’t get discouraged by that pushback because then I’m doing exactly what they want me to do, which is to stop, and that’s exactly what we’re not going to do.”

Art and artists have been essential components of the social justice scene in Ithaca, especially as community efforts have grown in light of national racial justice protests. Over the last few months, there have been protests against racism and vigils for Black individuals who have been killed. Since the end of May, people have gathered every Sunday to denounce racism locally and nationally.

Other students at the college, like Rivero, have been contributing to these social justice movements through their art. Rivero said that her most recent project is shown in Amalgam/a, an exhibition at the Community School of Music and Arts in Downtown Ithaca created in celebration of National Hispanic Heritage Month. The exhibition launched at the school and online Oct. 2 and will remain up through Nov. 23.

Rivero said she created collages for the exhibition that depict queer, nonbinary and trans people from the Latinx and Caribbean diaspora. She said that much of her art is inspired by her experience growing up in Mexico.

“As a child, really what I connected with and what I bonded to was the marketplaces that I would go to with my grandparents,” Rivero said. “All the murals that you would see around Mexico City and the really vivid landscape of people … were things I bonded to.”

“Each of those projects have a deep–rooted foundation to the systematic oppression that Black and brown bodies face on a daily basis,” Chavez said. “I really wanted to capture the emphasis that we need more women in art, in the art world, especially women of color and especially women who are part of the LGBTQ community.”

Bill Hastings, assistant professor in the Department of Art at the college, said that this increasing awareness of social issues has been a trend among the college’s students over the years. As a response, he said that he has created class projects inspired by social justice.

“I felt a need to have a project that allows people to voice their opinions about issues, and so I frame it around the broad net of social justice, and that’s of course going to include everything from identity, environmental, class, race, the biggest net possible,” Hastings said. “I think it’s important to foster an environment where all voices are welcome to be heard.”

Hastings said that art has been a part of activism throughout history. Mexican artist Diego Rivera created politically charged murals between 1907 and 1957 that expressed pride for his community and heritage. During the AIDS crisis in the 1980s, artist Keith Haring used his nontraditional version of graffiti to spread his message. Today, artists like Kara Walker use art with traditional silhouettes to express the atrocities of slavery.

Rivero said she believes that art is a crucial part of social justice movements.

“The role of the artist is very much to inspire revolution and to also fuel people’s spirits, and I very much see in the same way that art is a form of spiritual sustenance for me,” Rivero said. “I think it very much is for movements as well.”

Chavez said that he strives to continue to use his art as a platform for representation.