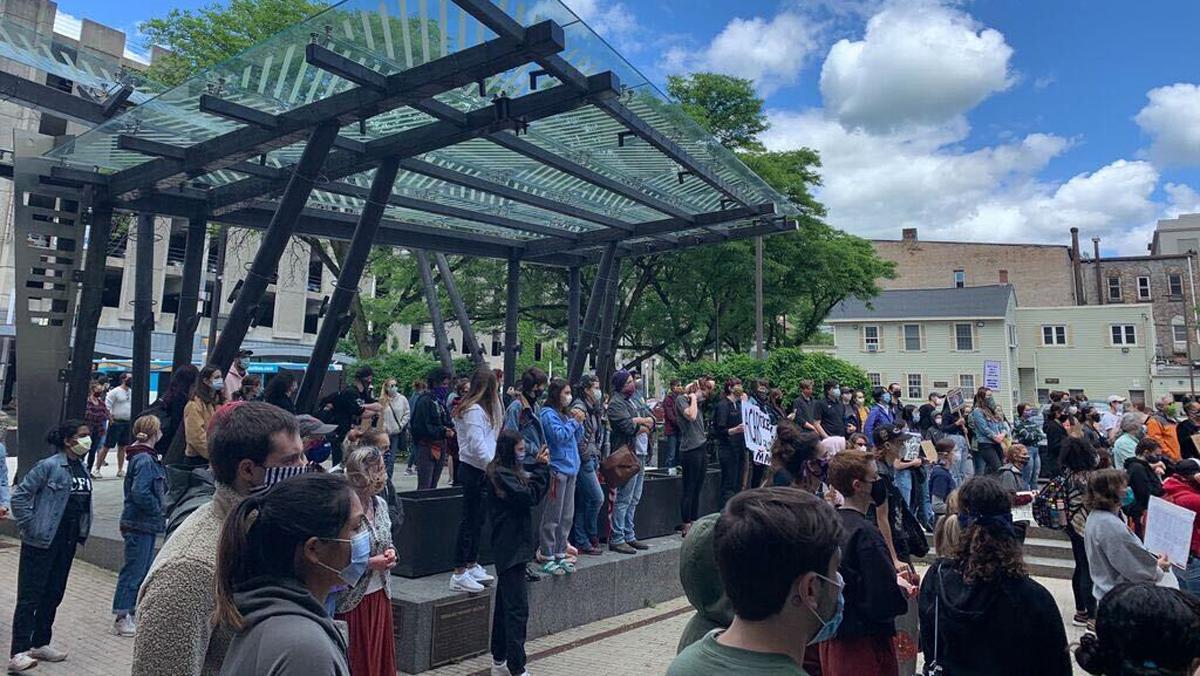 Madison Fernandez/The Ithacan
Hundreds of protestors gathered on The Commons on May 31 to memorialize George Floyd, a black man who was killed in police custody, and protest against police violence against black people. This was the first gathering, which will be held weekly.
By Madison Fernandez — Editor in Chief
Published: May 31, 2020

These chants echoed across the Bernie Milton Pavilion on The Commons as members of the Ithaca community came together May 31 to memorialize George Floyd, a black man who was killed while in police custody, and to protest racism and police violence against black people.

Floyd died May 25 in Minneapolis, Minnesota, after Derek Chauvin, a white man who was a police officer for the Minneapolis Police Department at the time, arrested him, pinned him to the ground and kneeled on his neck. Chauvin was fired May 26 and charged with third-degree murder and second-degree manslaughter May 29, but the other three officers involved in the arrest have not yet been charged.

Floyd’s death has been a catalyst for people around the nation to come together to protest the killings of black individuals, including a number of high-profile cases from just this year. In March, Breonna Taylor was shot to death by police officers after they entered her home on a no-knock warrant. In February, Ahmaud Arbery was shot by white men while he was jogging. Black individuals are three times more likely to be killed by police compared to white people. Black people make up approximately 13% of the American population, but, in 2019, black people made up 24% of those killed by police officers, according to Mapping Police Violence.

Since protests around the country began May 26 in response to Floyd’s killing, some have turned violent. Police have become increasingly hostile at these protests, and the National Guard has been deployed to at least 12 states around the nation as some protestors have burned and looted buildings.

The protest in Ithaca, an event that was attended by hundreds of people, was organized by Occupy Ithaca, an activist group in the community. The memorial will be held weekly at 2 p.m. every Sunday on The Commons. Black Lives Matter Ithaca issued a statement that it did not endorse the protest, nor was it involved in planning the event. The organization has not yet planned its own community response because of a current lack of resources, according to the statement.

“We have avoided promoting any of the upcoming activities, in part because we do not know the organizers and have questions about the political character and basic nature of the events,” the post stated.

Jordan Clemons, a community member, spoke at the protest and said the way to stop escalation of violence against the black community in Ithaca is for people to give back to the black and brown communities.

“I, along with many other minorities in this community, despite the motto being ‘Ithaca is gorges,’ I have not had the privilege of experiencing the ‘gorgeous’ described in Ithaca,” he said. “I have seen and experienced the ugly of Ithaca.”

Clemons called for accountability on behalf of those in power. He said that similar to the officers who stood by Chauvin while he killed Floyd, there is something holding back members of the Ithaca community who do not speak out against racial injustices.

He also spoke to the gentrification and lack of affordable housing in Ithaca, causing black community members who have been born and raised in Ithaca to move. Additionally, he spoke about racial disparities in education in Ithaca. Both Ithaca College and Cornell University are predominately white institutions.

“I don’t know why we don’t have many black and brown people down here today standing by my side, but one of the reasons I’ll give them an out is that we’re all on the hill,” he said. “None of us live downtown in Ithaca, New York, where we used to live not too long ago, myself included.”

He said he does not think that the Ithaca community has gotten to the point of looting and rioting, but individuals should not be afraid to go to that extent should the need arise.

Cynthia Henderson, professor in the Ithaca College Department of Theatre Arts, is the first African American at the college to be promoted to a full professor. She said at the event that it is the job of white individuals to get uncomfortable and call out people like Amy Cooper, a white woman who called the police on Christian Cooper, a black man who asked her to put a dog on its leash May 25 in New York.

“It’s not just on [people of color] to put ourselves on the line,” she said. “Our justice system is f—– up, but there are people in that justice system who are also trying to make a difference. Our job is to figure out, why are you standing there while the man has his knee on this man who is saying, ‘I can’t breathe’? Make them knock him out of the way because if a black person had done that, if a black person had come in and knocked that policeman out of the way, trust me, they’d be dead too.” 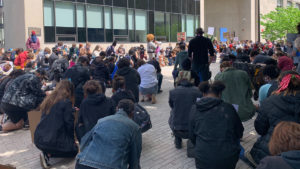 Other speakers at the protest — including members of the Ithaca community and students from the college and Cornell University — expressed disappointment, anger and frustration in their experiences as black people in Ithaca and the United States. Some shared personal experiences of the worries they face walking down the street or going to school as a black person and fearing for their lives at the thought of being killed. Others condemned the Ithaca Police Department (IPD) for its racial biases, like the arrest of Rose DeGroat, a black woman, last year on The Commons. Between speeches, protestors kneeled and observed moments of silence for Floyd and other black individuals who have been killed. As the protestors shared these stories, car drivers down East Seneca Street honked their horns in support.

After the speeches, the protestors mobilized and marched past the IPD, wielding signs that said, “Ithaca cops are guilty,” “We need a revolution,” “Make racists afraid again” and “White silence is violence.”

Although Tompkins County is in the Southern Tier region, which moved to phase two of reopening May 29, social distancing measures are still in place because of the COVID-19 pandemic, including keeping six feet apart and wearing a mask. Earlier in the day, Svante Myrick, mayor of the City of Ithaca, tweeted that those who are protesting should commit to quarantining for 14 days afterward.

Myrick was not present at the event.

There were no uniformed police officers present at the protest. One IPD car was stationed near the North Cayuga Street side of The Commons, and some cars were stationed on Prospect Street, near the IPD.

In a statement to the media May 29, Dennis Nayor, chief of the IPD, condemned Chauvin’s actions and said the IPD will work to continue keeping the Ithaca community safe.

“Reverence for life must always be our top priority and all persons should be treated with dignity, respect, and compassion,” he wrote. “Anything less will not be tolerated within the law enforcement profession. I vividly recognize that the nation is hurting right now so I join my colleagues, the community, and those who are in pain by praying with them for peace and healing.”

Phoebe Brown, an Ithaca community member and speaker at the protest, said that she was happy with the turnout and that there was a diversity in the ages of attendees. She said she looks forward to seeing more people at the next events.

“In the coming weeks, I don’t want it to be a whole lot of people talking,” she said. “I want it to be some strategy. People coming together and creating strategy, or how do we make change. How do we change this system?”

Hannah Wendel, a senior at Ithaca High School, said she came to the protest because she wanted to support the black community as an ally.

“I came here today because there were injustices,” she said. “I can’t right the wrongs, but I can’t also just sit by.”

Zoë Cameron ’20 was one of the students from Ithaca College who attended the protest. She said that she thought it was a productive way for black people in the community to have their voices heard and was grateful it remained peaceful. She said she plans to continue to attend the protests over the coming weeks.

“We were ready to protect whoever we had to protect,” she said. “We know that as white people, we have that privilege. They’re not going to want to touch us, but we were ready to get in front of anyone we had to if the time came. Today reaffirmed what I love about the community of Ithaca.”

Coronavirus does not justify racism