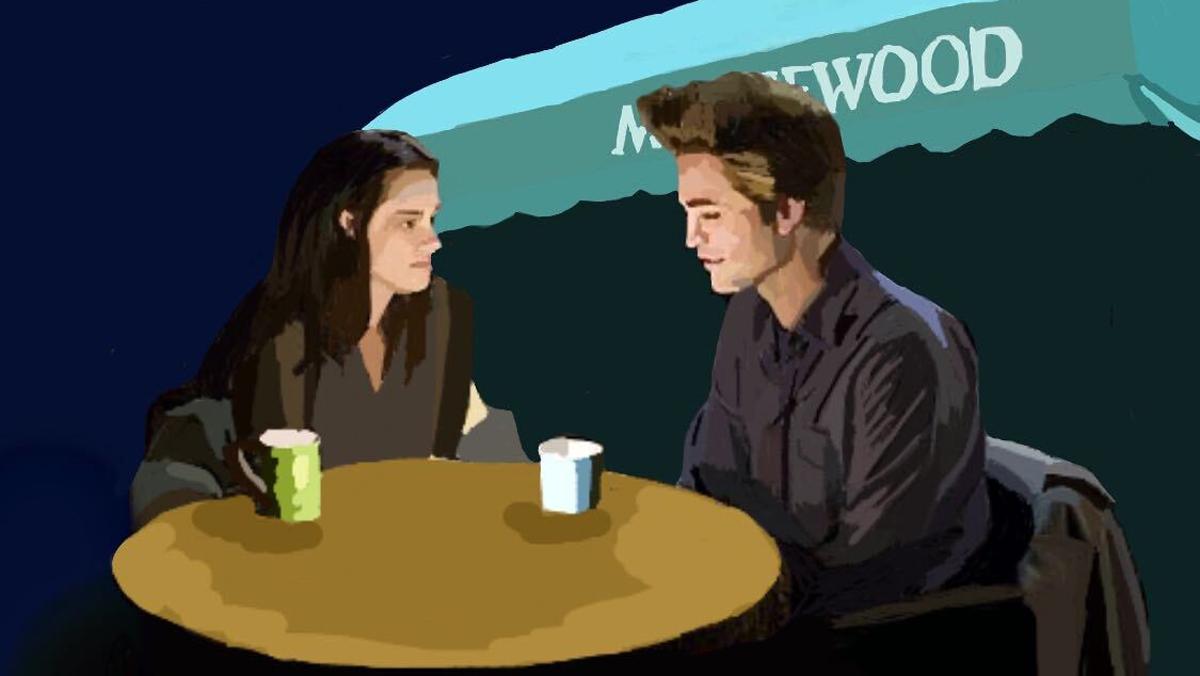 Anna McCracken/The Ithacan
In July, Chloe Landau ’20 compiled links to all of the fan fictions about Ithaca College that she could find. Her results — popular on Twitter — included fan fictions about “Twilight,” like “The Good Doctor” by Fanfiction.net user MeilleurCafe, in which Bella Swan and Edward Cullen go on a date at Moosewood Restaurant.
By Maddy Martin — Assistant Life & Culture Editor
Published: September 9, 2020

One day in Ithaca, a disheveled woman named Bella Swan shows up at Edward Cullen’s veterinary clinic with a stray cat she found. Sparks fly at their first meeting, and, later that night, Edward looks up Bella’s address to find she lives only a few miles away on Aurora Street. A day later, they go on their first date at Moosewood Restaurant.

But of course, the protagonists of Stephenie Meyer’s “Twilight” don’t actually live in Ithaca. It’s all from a fan fiction titled “The Good Doctor” by Fanfiction.net user MeilleurCafe.

On July 19, Ithaca College alum Chloe Landau ’20 posted a spreadsheet listing Ithaca College-centric fan fiction on her Twitter account. The spreadsheet, officially called Ithaca College Fanfictions, has amassed a following of students beyond what Landau said that she expected when she first became curious about the topic of fan fiction related to the college.

Landau began writing and reading fan fiction in middle school. She said fan fiction plays a large role in creating fan communities and giving fans their fix when their favorite works are on hiatus, between seasons or have ended.

Fan fiction is fan-created content, usually written stories, utilizing fictional characters and worlds from popular media like “Harry Potter” or “Star Wars.” Others focus on the lives of musicians and other real-life celebrities. Some fan fictions about real people have grown in popularity so much that they gain widespread mainstream attention. This is the case with Anna Todd’s novel “After,” which started as fan fiction about One Direction with Harry Styles as the main love interest.

Jaime Warburton, assistant professor in the Department of Writing, specializes in fan studies. She said that fan fiction functions as a way for people to leave one world and come to another.

“Fan fiction is a portal,” Warburton said. “When we’re consuming a story or a universe, we can see it, but we can’t really get into it, and that’s what people are trying to do when they cosplay, when they go to the giant Disney theme parks and when they write fan fiction.”

When Landau Google searched “Ithaca College fan fiction,” she noticed most of the fan fictions she found were for “Twilight.” She posted her findings on Twitter, and it instantly caught the attention of students, receiving 61 likes. Discovering that there was interest in the topic, Landau decided to search the web for more fan fictions and post her findings in a spreadsheet.

From July 16 to 19, Landau said that she spent hours of her free time searching for Ithaca-related fan fictions on popular fan fiction websites like Fanfiction.net, Archive of Our Own and Wattpad. The current fan fiction count on the spreadsheet is 50.

“Twilight” is still the most represented fandom on the spreadsheet with a total of five. “Percy Jackson and the Olympians,” “Riverdale” and “Glee” are tied for second place with four each. The amount of “Twilight” fan fiction is likely because the Cullen family moves to Ithaca during the events of the series’ second novel, “New Moon.” This led to fans imaginging the members of the Cullen family and Bella as students and professors at Ithaca College.

“I’m trying to think of as many ‘Percy Jackson’ ideas as I can to beat ‘Twilight,’” Stitely said. “Because if we can just beat ‘Twilight’ at something, that would be great.”

The longest fan fiction on the spreadsheet is a 103-chapter-long, approximately 630,000-word “Heartland” fan fiction titled “What this is,” written by user Heartland Rider. “Heartland” is an ongoing drama television show that premiered in 2007. The series follows the lives of the Fleming family on its ranch in the Rocky Mountains. The fan fiction takes place eight years after Heartland’s eighth season and imagines several of the characters as Ithaca College professors. The fan fiction also includes a piano recital in the James J. Whalen Center for Music.

“It is a beast of a fan fiction,” Landau said.

“It’s not something people want to attach to a professional brand, usually,” Warburton said. “It’s the same reason people have a finsta [fake Instagram]. … Anonymity allows people to have fun.”

One of the only fan fiction with a clear connection to a student from the college is “Psychopomp” by IC Shinigami, published in 2008. The fan fiction was based on the anime “Bleach,” and, in an author’s note after the first chapter, IC Shinigami states, “I am a student at Ithaca College, and I love it here.”

Warburton said authors, regardless of genre, will often write about the places where they’re from, places they have heard of or places they have read about. She said that when real locations appear in fiction, it makes fictional worlds feel closer to reality. She also said that people love it when their hometowns are mentioned in movies or other types of media, and fan fiction is no exception.

“Ithaca College can be both a part of our real lives and our fantasy lives,” Warburton said. “I think of it like a crossover episode, and crossover episodes are fun because they feel like proof that those two worlds are real. … When you draw your actual environment and your imagination in at the same time, [stories] can start to feel like reality.”

“It kind of helps me move on or grieve in a creative way and help others hopefully with the same process,” Kashikoi-kun said.

Kashikoi-kun said that he’s noticed an increase in fan fictions being read and written on the internet since the pandemic began. He said “7 Years Later” receives approximately 100 views a day, and his other fan fictions have also spiked in readership.

“I feel like creative people are just spending more time writing and creating other forms of art, whether it be fan fictions or scripts,” Kashikoi-kun said. “People just don’t have much to do, and, when you have more views, for some writers that motivates them to write more.”

Because of the pandemic, freshmen like Stitely won’t be able to experience living on campus during their first semester. Stitely said the spreadsheet has been her introduction to campus life.

“I guess this is my firsthand experience of Ithaca,” Stitely said. “In books and writing, you can put yourself in the place of a character, and, in [the fan fictions], I can put myself in a character who’s on campus when I personally can’t be on campus.”

Landau said that fan fiction has been an escape for her throughout quarantine. She thinks the spreadsheet became popular because others were looking for an escape when they found it.

“It’s provided a valuable distraction, an escape from reality and a source of entertainment,” Landau said. “I am both pleasantly surprised and really happy that it caught on as well as it did, and the hours of research that went into it were absolutely worth it for the joy it was able to bring the IC community.”