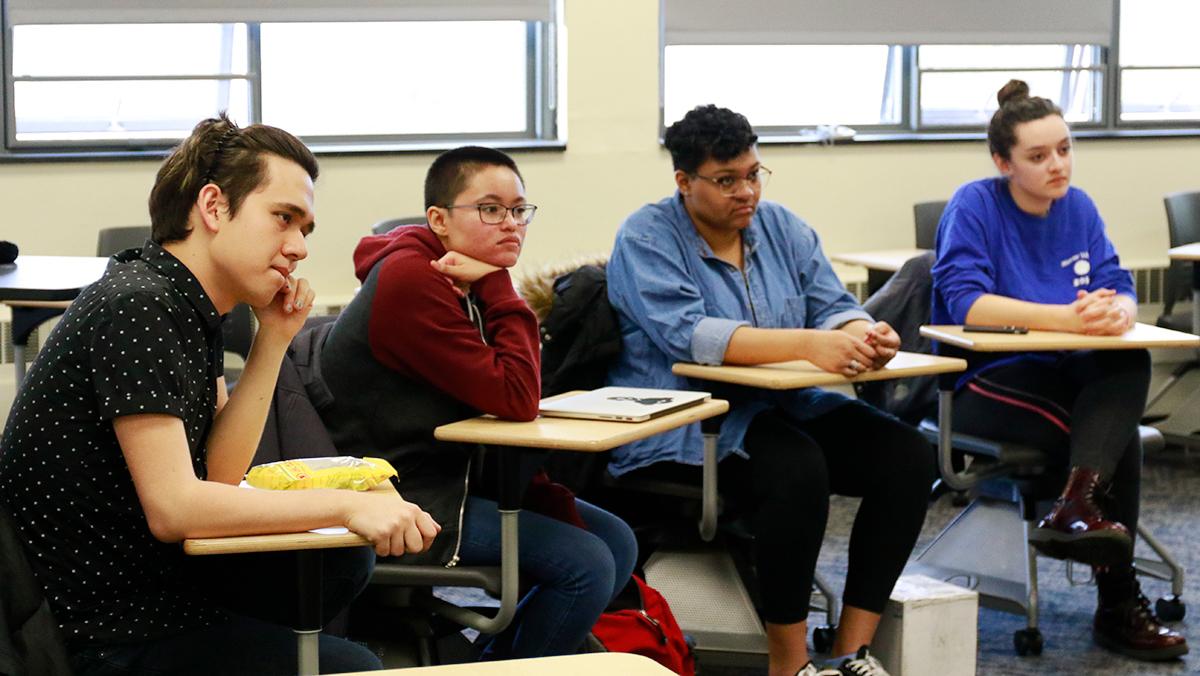 In IC Mixed, if there’s one thing the students have in common, it’s that they can’t easily check one box for a race or ethnicity.

“When you can’t be put into a box, it causes inner turmoil for multiracial people themselves: ‘Where do I belong? I’m not this, I’m not that,’” said junior Luke Watkins, event coordinator for IC Mixed.

The new student organization creates spaces for people of mixed heritage to express their thoughts freely. Launched in February, IC Mixed aims to strengthen the sense of community among people who identify as mixed or multiracial through discussions, events and other programs.

Watkins’ eyes burn with passion when he goes into detail about the complexities he’s experienced as someone who identifies as multiracial.

“Generally, there’s your race and your ethnicity,” he said. “Your race is something constructed: how people see you. And then your ethnicity portion is how you personally identify and where you or your ancestors come from. … Sometimes, the race and ethnicity align. And most of the time, they don’t.”

The terms “mixed,” “mixed race” and “multiracial,” all used interchangeably, refer to individuals who identify with multiple races or ethnicities. As Watkins said, people of mixed heritage sometimes feel a sense of isolation and confusion as to what their identities are.

The idea for the club derived from conversations among students with similar experiences at the East Coast Asian American Student Union Conference at Rutgers University in February 2016, which Watkins attended with sophomore Walt Martzen, now president of IC Mixed. IC Mixed was officially launched at the Student Organization Fair on Feb. 1 in the Emerson Suites.

“[Walt] took it upon himself to recruit others who felt similar–minded and also identified as multiracial,” Watkins said. “So it became an idea based on circumstance, based on life experiences, then going to this conference and thinking further, ‘How can we solidify this into something that can actually happen?’”

In addition to aiming to create a safe space for mixed individuals, IC Mixed engages the larger Ithaca College community in dialogue about issues from the perspectives of the mixed community through large-scale monthly events such as “Mix It Up,” an introductory event that took place Dec. 4 in Friends 205. Sue-je Gage, associate professor in the anthropology department and faculty adviser for the club, gave a presentation on her research about experiences with global mixed–race studies.

While the club’s structure does include biweekly meetings, Martzen said that these are more geared toward individuals who directly identify with a multiracial background.

“We want to create a community that is really for people who are mixed, and by keeping our biweekly discussion meetings more catered to these individuals, I think that we allow the conversation to go deeper,” Martzen said. “People have raw emotions to express and … sometimes that might be a little more difficult in front of people who do not directly share that experience.”

Sophomore Rianna Larkin, secretary of IC Mixed, said some of the issues people of mixed race face lead to the desire for a safe space.

“I identify as mixed: I’m white and Asian,” Larkin said. “But I don’t feel comfortable in solely white spaces because I don’t identify as white, and white people don’t see me as white. If I go into a POC space, I may feel I belong there, but does everyone think I belong there? So it’s sort of like, ‘Where do I fit in in the bigger racial picture?’”

Larkin said people of mixed backgrounds also have to deal with microaggressions from the wider society.

“One of the things we identified in our meetings is that it hurts even more when we get microaggressions about our mixedness from other POC,” Larkin said.

In addition to “Mix It Up,” IC Mixed has hosted two more open events since its inception. The club held a social called “IC Mixer” on Feb. 22 in Friends 201. Watkins said the event was an opportunity for students on campus to mingle with people they wouldn’t necessarily approach on their own.

“We have quite a few regular faces coming back to events and then a lot of people we’ve never seen before,” Martzen said. “Our turnouts are usually 20 to 30 people, which I think is a good number. We definitely have much opportunity to reach out to more people on campus.”

Recently, the club hosted “IC Culture Share” on March 29. The event encouraged participants to bring an item they personally identified with and that they believed represented the culture they associated with.

“There’s a conflict when a person identifies with something but everything outside contradicts that,” Watkins said. “So we offered a space where persons can bring something they personally identify with and present it to the group. That’s something everyone was invited to.”

Watkins said IC Mixed has played an important role in helping him feel secure in his identity and connect with others who struggle with similar difficulties.


“I’ve never been happier for a place to express myself,” Watkins said. “And I think before IC Mixed, there was definitely an absence of that. It’s like this space I’ve never been in before, and that, for me, is powerful.”