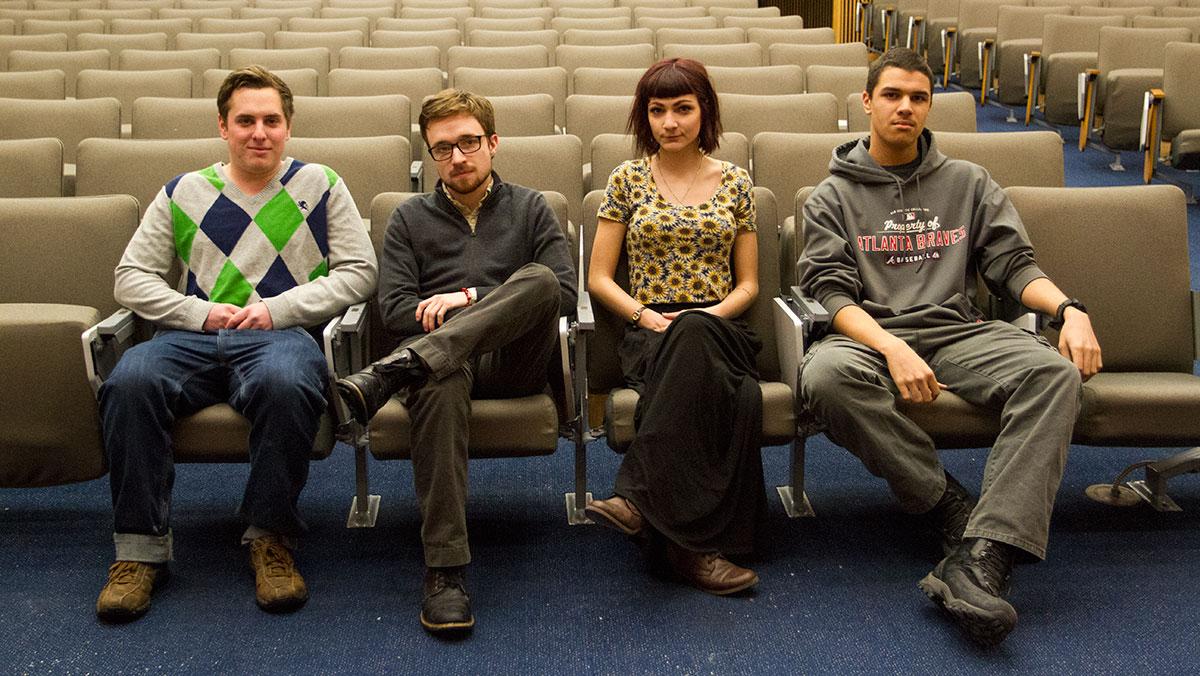 In Park Auditorium, 12 students sit down to watch “The Night of the Hunter.” The film follows Henry Powell, a traveling preacher who thirsts for murder and money. Fresh out of prison, he seduces the widow of a bank robber, seeking the whereabouts of $10,000, of which only the widow’s two young children know. After the screening, the 12 students discussed the film and spoke about joining the organization that hosted the event.

This congregation of cinema-lovers, which occurred Feb. 12, was the first of a screening series held by student organization Film Fervor Magazine. First established in Fall 2014, Film Fervor’s mission is to use reviews, essays, personal pieces, film-inspired poetry, one-on-one debate pieces, group-determined film rankings and regular film screenings with informal post-film discussions to spread critique and expression of underappreciated films. Film Fervor Magazine’s definition of an underappreciated film is one that didn’t receive what the executive board believes is the deserved attention from critics and audiences and has become buried or largely forgotten over time.

The group was started by sophomore and president of the group Byron Bixler. He went to his academic adviser, Joshua Bonnetta, assistant professor of media arts, sciences and studies, to make this organization into reality.

Bonnetta, who is the group’s adviser, said he was surprised there was not an organization like this already on campus. He also said the physical cinema is slowly being lost as the industry changes and cinema migrates from physical spaces to predominantly online forms of distribution.

“As students, they are able to create that space in order for ideas and concepts in cinema to be discussed,” Bonnetta said.

Junior Robert Hummel is majoring in cinema and photography and serves as Film Fervor Magazine’s vice president. Hummel said the organization has a strong emphasis on hearing from the student’s own unique perspective.

“In lieu of a film studies classroom, where a lot of thoughts and opinions can be forced on a student or reinforced in a very replicative way, Film Fervor Magazine allows them to broadcast and re-evaluate their own opinions about film and really offer their own unique insights,” Hummel said.

According to his website, Hummel has produced three short films on Vimeo. Hummel said his filmmaking experience helps to better articulate his reasoning for critiquing films.

“One, it’s given me an appreciation of each technical angle of filmmaking,” Hummel said. “It’s a collection of hard work. The other aspect is being a producer requires a lot of managerial skill. And it’s about seeing the larger the piece, which is this magazine.”

Hummel’s contributions to the first issue, which he said the group would like to release before the end of the semester, includes critiques of ’80s B-flick horror films, which Hummel said he believes is a niche genre. Other contributions from members include articles on the Hollywood film industry and classic foreign films.

However, to join Film Fervor Magazine in critiquing film and cinema does not require one to major in the craft. Junior Eli Hayes, Film Fervor’s secretary, for instance, is a psychology major. Hayes said through his education, he wants to analyze films through a more psychological lense.

“My life is a big film course,” Hayes said. “I thought psychology would be great so I could better understand my actors and my scripts.”

Hayes said he became involved with Film Fervor Magazine coincidentally. Before coming to Ithaca College, Hayes met Bixler through letterboxd.com, a website designed to diary how a user expresses their tastes in film.

“One day we’re talking on the website, and I asked him, ‘Where do you go to school?’
Byron replied, ‘Ithaca College,’ and I said, ‘I go to Ithaca College, too,’” Hayes said.

Hayes said once they met in person, they became friends and he helped Bixler get Film Fervor Magazine off on its feet. Hayes said he has helped create 12 short films. Hayes’ biggest film achievement is getting a noncompetition short film in the Cannes Film Festival in France.

Hummel said there are many steps in creating a physical magazine, such as printers and affordability. Hummel and Hayes said for now they are aiming to be an online publication.

Sophomore Allison Ditzig, Film Fervor’s treasurer, said students should simply try to be involved with Film Fervor Magazine. She said Film Fervor’s goal is to include others as much as possible.

“Everyone is there together to enjoy the same thing,” Ditzig said. “This isn’t something people are doing to gain something from other than enjoying. I feel like we are all there for the same purpose — a purpose that’s truly dying out.”