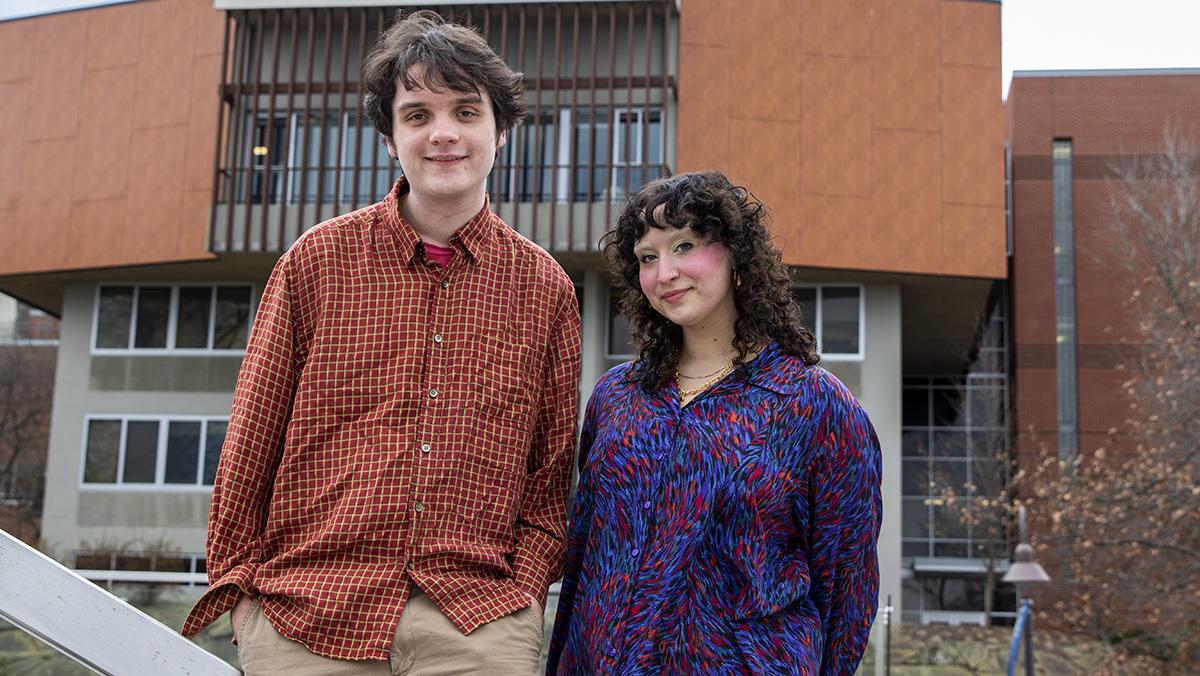 Eleanor Kay/The Ithacan
From left, juniors Wallace Petruziello and Athena Rajnai make up the music duo Vestments. The band has not had any opportunities to perform live this semester.
By Eva Salzman — Life & Culture Editor
Published: December 8, 2021

On a windy Friday night in December, junior Wallace Petruziello took the make-shift stage in a group of students’ apartment alongside seniors Justin Lindsay, Gabe Levin and Peter Jensen to perform as Library of Egress. The group played for a crowd of enthusiastic Ithaca College students — for the first time in almost two years.

What may look like a regular college party from the outside is what regular performers and attendees call a house show — a deeply influential and communal aspect of the music culture at the college. For years, off-campus houses have hosted student bands from the college to perform for their eager, supportive peers. These performances gave growing bands the opportunity to perform live and to build a following before branching out into the local music realm. But the ever-expanding scene came to a halt when the COVID-19 pandemic sent students home in March 2020. Groups like Library of Egress were forced to put their careers on pause, until a group of students hosted the first organized house show since February 2020 on Dec. 3.

Petruziello, singer and guitarist in Library of Egress, said the band hit its stride right before the pandemic began and that it had several gigs lined up for after Spring Break 2020. He emphasized the importance of the most recent show and said that performing live again got the band back on its feet.

“The only way to keep a scene alive is if there’s people that really take initiative to make it happen,” Petruziello said. “And that’s why it was so great, it ended up being the best night of the semester. I felt like I was at Ithaca College again, the same way I did as a freshman.”

Lindsay, singer and guitarist in Library of Egress, said one of his biggest worries with the absence of house shows was that the culture would die out. He said without incoming classes being able to experience a show, he feared that music students wouldn’t be inspired to form bands anymore.

“[House shows] just fuel the music scene here and they inspire kids to start their own bands,” Lindsay said. “There’s very few bands on campus right now, and I think that’s because of the lack of house shows … a huge part of them is just inspiring the next generation of musicians here.”

More well-known student groups like Quail were able to gain a following at house shows before the pandemic hit. Because of this, Quail was well established enough to perform at local venues like The Haunt in February 2020 — but newer groups haven’t been so lucky.

Junior Athena Rajnai said they teamed up with Petruziello to form the duo Vestments after the COVID-19 pandemic began. Rajnai said that because of the lack of house shows, Vestments has not gotten any opportunities to perform live.

Rajnai also said they frequently attended house shows during their freshman year, and as a student in the School of Music, has watched older student bands build their fanbase through these performances.

“If you didn’t really play house shows or anything before that, you don’t really know who your audience is going to be,” Rajnai said. “[Shows] give you a reputation within the college community that is within the greater Ithaca community and people will want to come see you because … you have a reputation.”

Petruziello said that although there have been on-campus opportunities to perform, they are a rare occurrence and don’t offer the same culture as house show performances do. Petruziello said Library of Egress performed at an on-campus event called “Terrace Rocks” in Fall 2019, but that the event has not offered live music since then.

“I think a big reason that people are so interested in this kind of local music is because a lot of the time it feels like a party,” Petruziello said. “House shows create this space for musicians to show themselves off to their peers and just sort of say, ‘Hey, this is what we are, this is what we’re about,’ and that was definitely to the benefit of people like us.”

As both an attendee and a performer, Rajnai emphasized the role that house shows have in bringing students together. They said they think the only way the culture can be revived is if students come together to create opportunities for it to grow.

“I think students need to build a sense of togetherness a little more sometimes, especially between performers,” Rajnai said. “Everybody’s sort of waiting for the scene to bring itself back, and I don’t know if that’s really a feasible option within our time here … Let’s create opportunities for ourselves so that we can rebuild everything and leave something behind for the students who haven’t experienced this yet.”