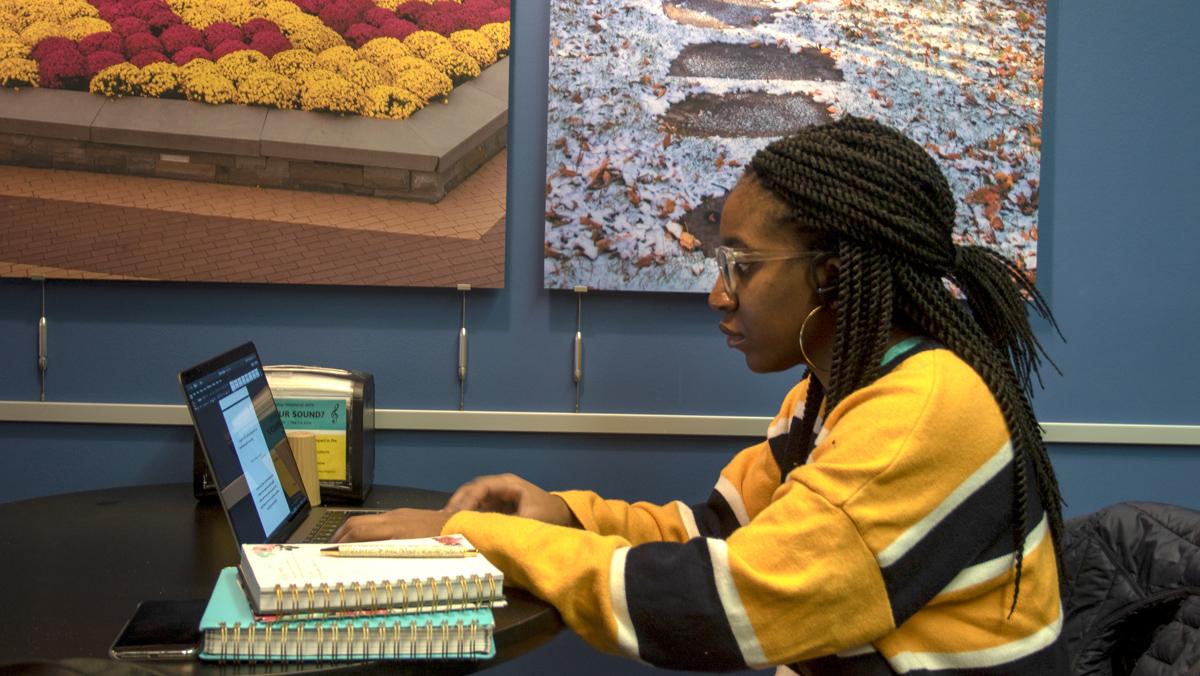 Jackie Marusiak/The Ithacan
Freshman Frankie Walls is compiling “Into the Garden”: a book of poetry and other art aimed at encompassing and empowering womanhood. She is working to expand the collection and acquire a publicist.
By James Baratta
Published: January 22, 2019

Ithaca College freshman Frankie Walls was sitting in the Rowland Hall lounge, having a study session with her friends when she shared some poems she wrote about female identity and sexual assault. Walls was surprised by her friends’ responses. After hearing her poems, they too opened up about personal experiences of sexual assault and times when they felt pressured to conform to societal norms as women.

This experience inspired her to compose a book called “Into the Garden.” The book, which will include a collection of poetry, songs and other forms of expression, aims to help women unpack their personal experiences with female identity, sexual abuse, relationship abuse and assault — both sexual and physical. Walls said the book will allow women to relate to stories in creative ways and encourage them to move forward.

“The whole point of it is to give voices to people who feel voiceless or to address things that they’ve never talked about before,” Walls said. “I wanted to encompass the female experience.”

In late October, one of Walls’ friends was physically assaulted at a party. Learning about this incident motivated Walls to take action by sharing her poems with friends. The response ultimately encouraged Walls to ask whether or not they would be interested in becoming involved with the creation of the book. The collective answer was yes.

“Part of it is just me telling a story, and mixed with that are journal entries for different sections speaking about females and their life experiences,” Walls said. “I want to make sure their voices are heard in the rawest form possible because I cherish and respect their willingness to share their stories.”

Walls said she was inspired by a variety of literature to write her own poetry about these topics. Some of which include “Jane, a Murder” by Maggie Nelson — which intertwines journal entries with poetry — and “The Bluest Eye” by Toni Morrison. The latter has an extensive symbolism of flowers, which is where Walls said she draws the inspiration to give each writer a flower-oriented alias.

Walls said the reason for this was to reference the symbolism of flowers in “Alice in Wonderland.” She talked about how, in the story, personified flowers ridiculed Alice for not being ladylike enough. The creation of these aliases was done purposefully and ironically to directly oppose societal expectations for women, Walls said.

“Every girl is a flower. … The way I keep it anonymous is by giving each girl a flower name, and I describe each girl as more of a floral thing than as a person,” Walls said.

Walls said she plans for the book to be at least 50 pages long by the end of the spring semester. She is working on acquiring a publicist and plans to have between 75-100 pages upon completion.

Freshman Emma Mittiga, who uses the pen name Lilac, said writing for “Into the Garden” was a journey that helped her open up about a time she was assaulted.

“They’re my favorite flower, and my city, Rochester, has a lilac festival every year,” Mittiga said. “It was kind of a cathartic experience for me because it was the first time I had documented what happened.”

Although most of the pieces compiled in the book are related to deep, personal experiences of sexual assault and other forms of abuse, other definitions of female identity are present throughout. Walls explained that her book also deals with gender stereotypes and norms.

Kelley Cook, a professor and case management program director at the college, taught Walls’ freshman seminar class, called “ICSM: Multi-Storied Lives,” and was present for the presentation of “Into the Garden,” which was Wall’s final project for the class.

“I was moved to learn that a student was struck by our conversations about feminist discourse, larger social constructs, and took the steps to write about something so personal and intimate,” Cook said. “When you work with people who have experienced both significantly traumatizing things and being able to witness the resilience that people have — sometimes people don’t realize they have — that allows them to come out the other side of the trauma.”

Freshman Kaitlyn Katz, one of the many writers working on “Into the Garden,” writes under the pen name Rosemary. She said her contribution to the book was a letter to her past self.

“As a writer, I like to capture voice, and the voice I chose to capture was a girl looking back on her past self. I saw it as a bit of hope,” Katz said. “I’ve been really fortunate to not have a terrible experience like so many other people working on the book have. When it came for me to write, I was like, ‘Why don’t I just write a poem about what I thought guys were like and what I think guys are like now?’”

Both Mittiga and Katz said the book has an underlying theme that speaks to those who feel as though they have no one to turn to, often after an unwanted sexual experience.

Katz said the experience of writing for “Into the Garden” benefited her as a writer. She said that when Walls shared finished sections with the other writers, everyone responded well. She said she appreciates Walls’ ability to turn hardship into art.

“She is trying to make something that was a really terrible experience and make it into a learning experience,” Katz said. “What I think is wonderful about this project is that she’s taking a tragedy and learning from it.

‘In My Own Words’: How Should We Talk About Sexual Abuse?