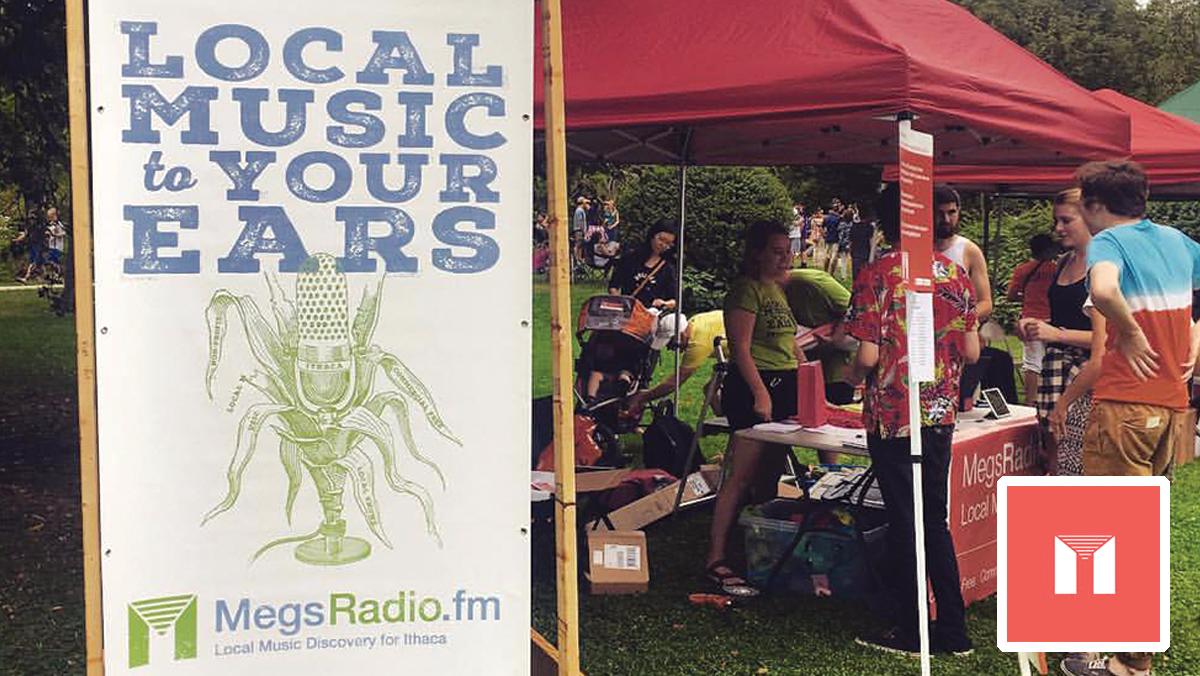 MegsRadio/Facebook
MegsRadio, a personalized app that promotes local artists, debuted a new campaign Sept. 18 at PorchFest. The goal of this campaign is to promote local food and music to contribute to a stronger community.
By Sobeida Rosa — Contributing Writer
Published: October 26, 2016

What used to be a core group of seven team members has expanded to 25 Ithaca College students working together on MegsRadio, a student-run online radio station featuring local artists.

When the prototype for MegsRadio first launched in 2013, there were some technical difficulties. For example, the radio didn’t function in web browsers like Safari and Internet Explorer, and group members at the time said the web version was not very visually appealing. Now, MegsRadio can now be accessed through a wide variety of platforms including Safari, Internet Explorer and a mobile app using iOS software. Currently, there is an android app in alpha testing, meaning the group members are using the app, finding bugs and fixing them. The Android app is expected to be released in the spring of 2017.

Doug Turnbull, associate professor of computer science, created MegsRadio in the summer of 2011 with the help of three students and three faculty members. The station is similar to Pandora in functionality in that it contains an algorithm that suggests songs based on the genre a person is listening to at that moment.

Will Van Dyke ’05, now an executive for Warner Music, continues to advise the team. Other advisers also include Brian Dozoretz, manager of Recording Services in the James J. Whalen Center for Music, and Thorsten Joachims, professor in the Department of Computer Science at Cornell University. Alumni who have previously worked on the project also still loan their services.

As a product of the college, the radio station operates under an educational license. This allows MegsRadio to operate as a nonprofit, ad-free online radio station without having to privately fund itself and pay for expensive commercial licenses.

But MegsRadio has recently launched an ad campaign centered around Ithaca and its food and music. The campaign incorporates these elements to communicate the idea that eating locally and listening to local music contribute to a better community.

The campaign debuted during Porchfest, an annual music festival where local artists perform on porches in the Northside neighborhoods of Ithaca. This year, the team created a station in collaboration with Porchfest, featuring music from the local artists who performed, which was called “Ithaca Porchfest Radio.”

The project also receives financial support from the National Science Foundation, which is an independent federal agency purposed to promote the progress of science. MegsRadio received a grant from the foundation in May 2012, and it has sustained the project until this year. The continuous grant is set to be renewed this fall.

Senior Luke Waldner said he has worked on the project for three years and became involved with it through Laurence Welch ’14, who was a system architect for MegsRadio. He said through the years, students have typically left the project after they graduated, so the team is always looking for new members who will mesh well with the lab dynamic and who are familiar with development tools.

He said working on the project is also a good way to help give students real experience writing codes and algorithms that shape the playlists.

“Being able to work on a project from the ground up is [a] unique and great tool for getting experience,” Waldner said.

Waldner said the group is currently working on stabilizing the radio station’s client apps and will then move on to refining the in-house data analysis platform and the playlist algorithm.

Dozoretz has been involved with the project since its inception and has been the link to the local artists in the Ithaca area, Turnbull said. Dozoretz said he believes MegsRadio could serve as a great asset to local artists.

“One of the big things in local music is people really don’t know how to promote themselves anymore.” Dozoretz said. “If they create an event on Facebook, people might see that, but there is no way to judge the ‘going,’ ‘not going’ status. And if half your audience is not on Facebook, then you’ve missed them. [MegsRadio] is a really convenient place to put all that information. ‘Here is my music. Here’s where I’m playing and a little bit about us.’”

Turnbull said he has many goals for the future of MegsRadio, such as improving algorithms, codes and graphic design, and gaining 100 daily users. Waldner said they currently receive at least 14 users a day.

Turnbull said the project isn’t just another portfolio piece, but it also provides opportunities for growth for students.
“This is student-driven and community-focused, and it’s not-for-profit,” he said. “The real benefit to the students, whether they’re volunteers or a paid research assistant for a small number of hours every week, is that they all go out into the tech world and do amazing things and are well-compensated for those amazing things.”