Student-run production explores coming of age in the ’80s 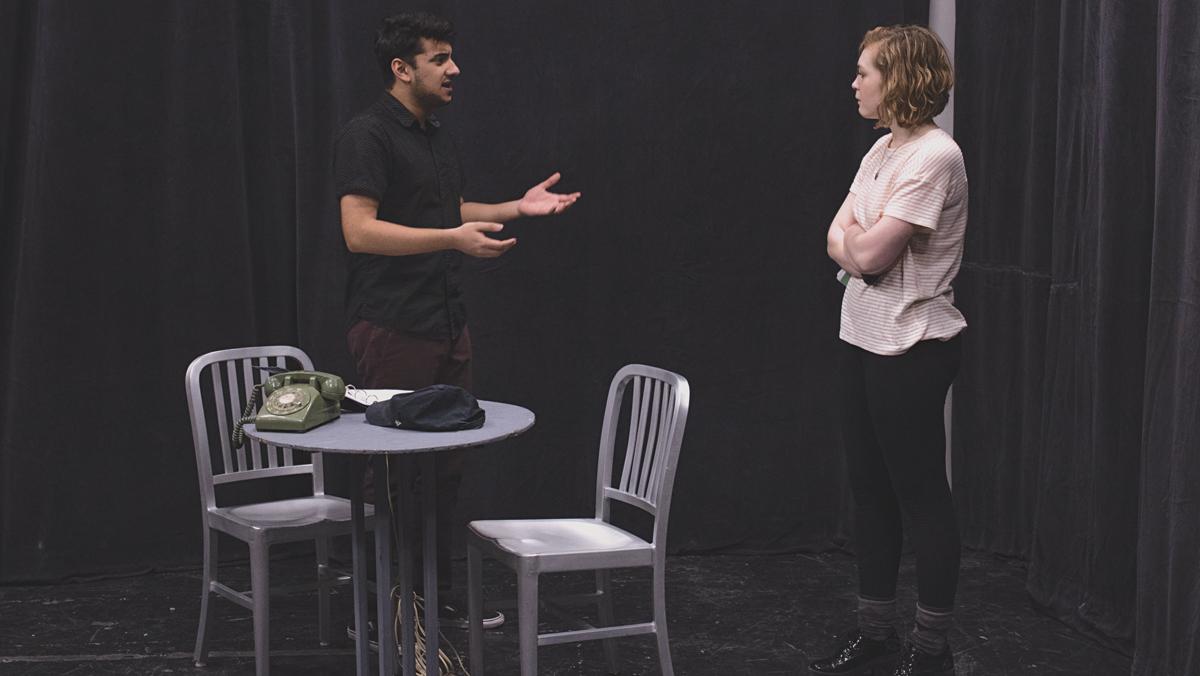 It is March of 1982. The United States is in the second year of the Reagan Era. The president, who is about to be re-elected, is leading a conservative movement in national policy-making, and Warren, Dennis and Jessica are struggling to become adults in this tumultuous political time. Two days of their journey will be brought to Ithaca College in IC Second Stage’s production of Kenneth Lonergan’s “This Is Our Youth.”

IC Second Stage, a student-run theater group that encourages its directors to pursue creative routes for performances, is currently working on their production of “This Is Our Youth.” Sophomore Annabel Randolph proposed the show through the organization and is now working as the director.

The play is a coming–of–age story about three privileged teenagers — Warren, Dennis and Jessica — who are living in the Upper West Side of Manhattan. It is set in Dennis’ one-bedroom apartment, where Warren brings the $15,000 he stole from his father after being kicked out of his house.

“‘This Is Our Youth’ is about the time in between being young enough to get away with things and having to turn into what we would view as a full-fledged adult,” Randolph said.

Randolph said she proposed “This Is Our Youth” to Second Stage because she thought the college community could relate to it, since it is about a group of young adults. She pitched the play at the group’s pitch meeting, where anyone who has formed a proposal and filled out the proper forms can propose a production they wish to direct. After she pitched the idea, club members approved the show and began the process of putting the production together.

“I think this show is very interesting because … it’s conversations you could hear in the pub or in the library or in the dorms,” Randolph said. “All of the themes in the show are so universal to what it means to be a college student.”

Freshman Katie Nevils plays Jessica in the production. She said that the characters in the play are trying desperately to act like they are not scared of growing up, which she said she believes is reflective of youth today. The characters are grappling with both personal and societal issues, which many college-age people also experience.

Nevils said that she first read “This Is Our Youth” in her scene study class. She said that she fell in love with it because every scene is packed with multiple themes, like materialism and finding one’s identity. She said that she was excited when she saw Second Stage was putting on the production and knew she wanted to audition. 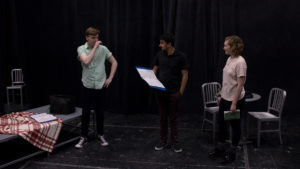 Freshmen Tyler Carey, Iyengar and Nevils play Dennis, Warren and Jessica in “This is Our Youth.” (Caroline Brophy/ The Ithacan)

“It’s something that I really wanted to work on right away,” Nevils said.

Freshman Dhruv Iyengar plays Warren in the show. He said that when he auditioned for the acting program at the college before his freshman year, he used a monologue that the character Warren performs in “This is Our Youth.”

“‘This is Our Youth’ is my favorite show that I’ve ever read,” Iyengar said. “This is a play that’s near and dear to my heart.”

Since the play has a small cast with only three people, Randolph said the role of director is different from usual. There are only six people at each rehearsal — Randolph, the actors and two stage managers — so everyone can have input about the choices being made in the production.

“It really is a creative ensemble,” she said.

Randolph said “This Is Our Youth” is also relevant because of its political setting. The Reagan Era is known for being conservative in terms of government policy, and President Trump’s presidency marks the transition back to a conservative leader after the Obama administration.

“A lot of the things happening in the historical context of the play are things that are similar to what’s happening now,” she said.

Nevils said that the play involves ideas of privileged liberalism, which are especially reflected in her character. She said Jessica represents people who are passionate about political issues on a surface-level but do not try to make any real change.

Nevils said that the play also addresses issues of drugs. It shows privileged kids dealing with drugs firsthand, whether it be buying, selling or using.

Sophomore Brielle Logan, executive producer of Second Stage and one of the stage managers for “This Is Our Youth,” said that though the play is set 30 years ago, there are a lot of parallels between the experiences the characters have and experiences young adults have now when dealing with crushes, intimate relationships and friendships.

“They’re rich kids in the Upper West Side of New York in the 1980s,” Logan said. “I feel like that’s a weird time to come of age.”

“This Is Our Youth” can be seen March 30–31 and April 1 in Presser Hall in the James J. Whalen Center for Music.

Trump’s frequent peddling of “fake news” has often come in the wake of negative news reports about his administration or his policies.