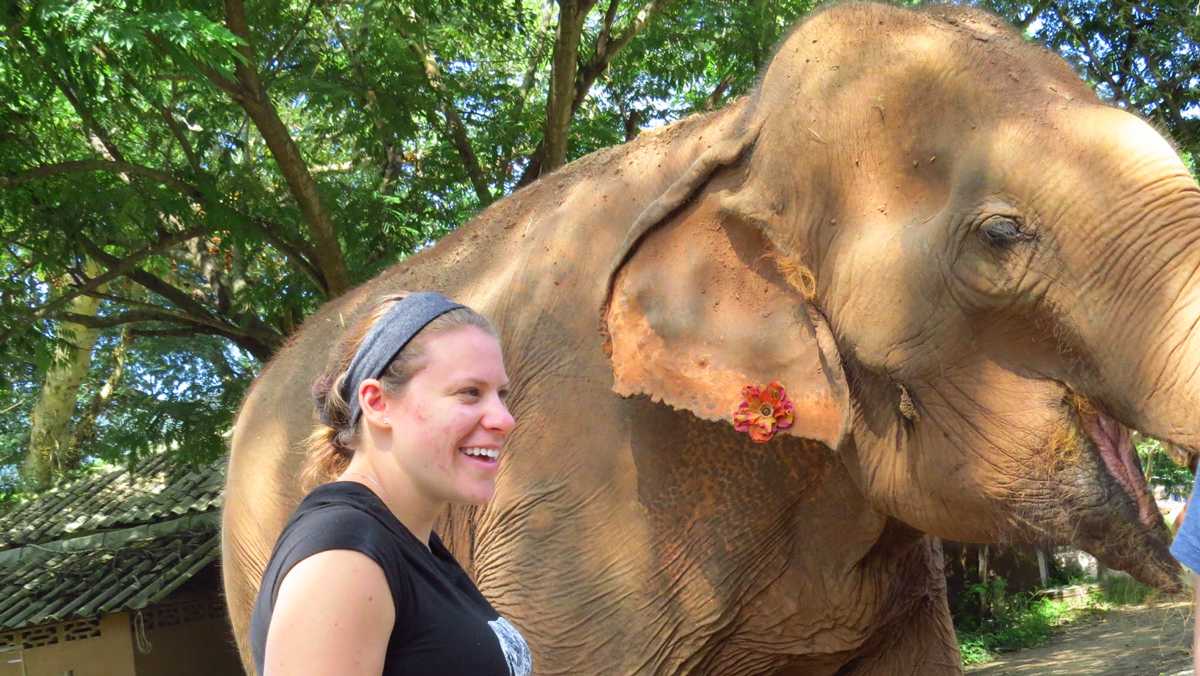 Courtesy of Samantha Epstein
Sophomore Samantha Epstein spent the summer of 2017 in Thailand as a pre-veterinary biology major. After her trip, she returned to campus and declared a new major: communication management and design.
By Silas White — Staff Writer
Published: April 18, 2018

Sophomore Samantha Epstein knew she wanted to be a vet from the time she was young. She had always had a love for animals, especially dogs and horses, and decided to enter Ithaca College as a pre-veterinary biology major to pursue her goal.

As a freshman, she heard of Loop Abroad, a study abroad program for pre-vet students. She decided to apply for the program, and in the summer of 2017, she traveled with the group to Thailand.

The group spent most of its time in Chiang Mai, the largest city in northern Thailand. Epstein said that when they were there, most of their time was spent at an elephant sanctuary, called Elephant Nature Park, where they spent time caring for the elephants and shadowing veterinarians. Many parts of Southeast Asia, like Thailand, still contain unexploded bombs from the Vietnam War that could be at risk of detonating. Thousands of people are killed every year from old bombs detonating, and animals are often hurt too.

“There are a lot of elephants that step on landmines, and it gives them huge wounds,” Epstein said. “When they come to Elephant Nature Park we scrub their wounds and make them as healthy as they can be.”

Epstein said she found she was most passionate about the connections she made with both the other students and the locals. She said she was able to connect with them despite the minor language barrier, and they bonded over teaching one another Thai and English words. 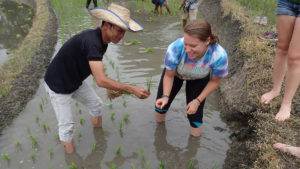 Epstein learned how to plant rice from a local villager when she was abroad in Thailand. (Courtesy of Samantha Epstein)

“It was really special to be able to learn about a completely different culture … and experience it in a new way that was such a culture shock, but in such a comforting way,” Epstein said.

The last week of her trip was spent sightseeing around Thailand and connecting with locals. Epstein said one particular experience working alongside rice farmers in a remote village made her want to pursue a line of work that involved helping people. Epstein said she and other students in the tour group were able to laugh and bond with the farmers.

“We had no idea how to plant rice and we were so muddy and disgusting,” she said. “They laughed at us and called us ‘the Westerners.’ Making that connection really made me want to communicate with people more … and learn other people’s stories.”

She began questioning her choice of major after her trip.

After returning to campus in Fall 2017, Epstein said she was at a crossroads. She still considered working with animals to be part of her identity but was not sure she wanted to be a veterinarian anymore.

“Veterinary work is something my heart will always be drawn to,” Epstein said. “But something I found I was most passionate about when I got back from Thailand was not the veterinary work but the connections I made with every single person I met on the trip.”

She said Elizabeth Bergman, associate professor and chair of the Department of Gerontology, had a major influence on her decision to switch majors to communication management and design. Epstein was in Bergman’s Age Matters class in Fall 2017. Bergman said the class focuses on the way age influences identity. Bergman said Epstein was in a state of transition, which helped her connect with the themes of transition the class focused on. 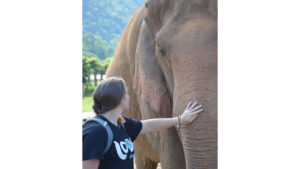 Epstein worked with elephants like Lucky at the Elephant Nature Park in Thailand. She helped clean wounds that occurred from unexploded bombs leftover from the Vietnam War. (Courtesy of Samantha Epstein)

“She began coming to office hours to discuss the big decisions she was facing,” Bergman said. “I think our conversations helped give her permission to seriously entertain she might make a big change, and that it’s OK to change your mind.”

Epstein said her relationship with Bergman made her consider majoring in gerontology. Ultimately, she switched from biology to communication management and design out of a desire to help people through non-profit work.

While Epstein was transitioning from majors, Bergman became her temporary academic adviser.

Junior Jack Ficcardi, president of Guiding Eyes for the Blind of which Epstein is a trainer for, said Epstein is incredibly friendly and eager to do work.

“She’s very driven and organized,” Ficcardi said. “One of the things I like most about her is if she has something to address with you, she has no problems addressing it.”

Epstein has been volunteering at Loaves and Fishes, a Christian ministry that provides free meals out of St. John’s Episcopal Church since Fall 2017. She said the support people there have for one another struck her as inspiring.

“Being there for people in times of need or struggle, and trying to make a positive impact as much as I can has really stood out to me as the most important thing in my life,” she said. “Doing anything other than that didn’t matter to me.”

This summer, Epstein has a communications internship at Heartworks, a New Jersey–based nonprofit that does social work for families facing crisis.

Epstein said veterinary work is something she’ll always have respect for, but she knows her decision to not pursue that field was the right one.

“Being a vet would have me see animals and people on their absolute worst days that they would never want to remember,” she said. “I’d much rather have a much more positive impact on people’s lives by communicating with them and assisting in their everyday lives.”