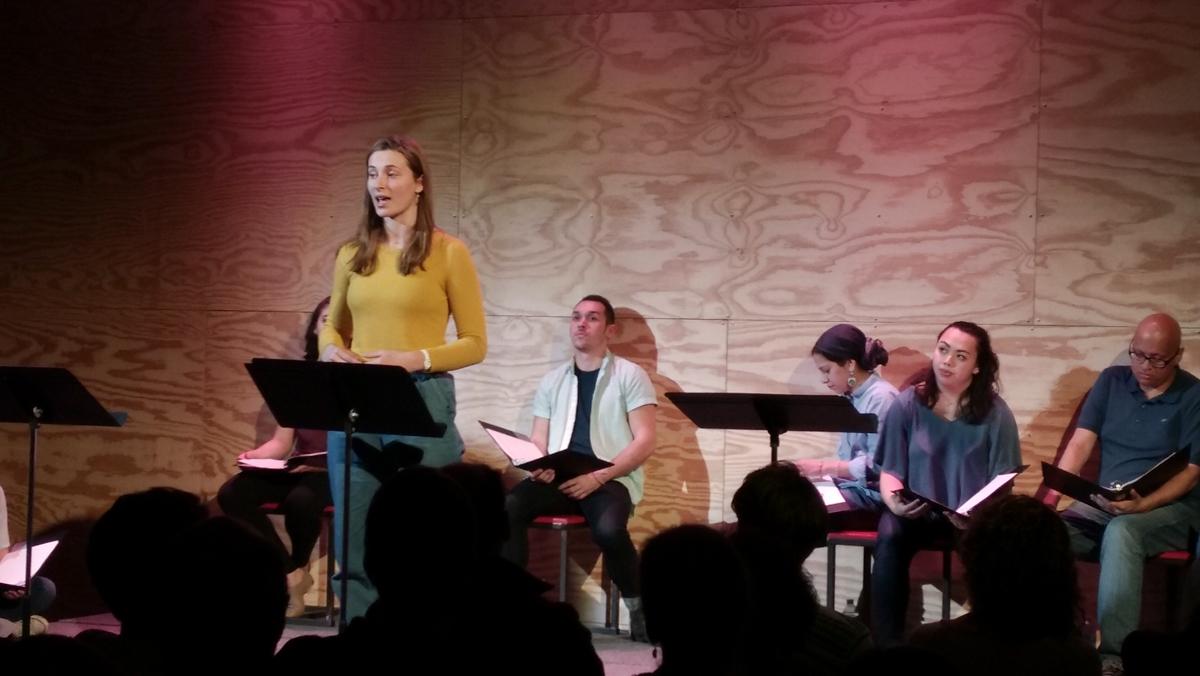 Courtesy of Kathleen Mulligan
Freshman Lydia Kelly takes part in the "On Common Ground" performance. The project was the culmination of a three week residency at Ithaca College.
By Ashley Stalnecker — Staff Writer
Published: December 14, 2017

Associate professor Kathleen Mulligan and Ithaca College students worked with a creative team made up of U.S. and Pakistani citizens to create a cross-cultural piece of theater about violence with their production “On Common Ground.”

Playwright Linda Alper, director David Studwell and Pakistani artists Imran Iftikhar and Rabia Pasha from Theatre Wallay in Pakistan came to Ithaca to collaborate with students from the college from Oct. 19 to Nov. 14. The production has been in development since 2016.

Mulligan and Studwell are both Fulbright scholars. The production was funded by the U.S. Embassy in Islamabad through a $347,000 grant Mulligan applied for.

Mulligan said she asked for the grant because the embassy had approached Theatre Wallay, asking them to do another project with the U.S. after their initial success with a similar collaboration with Theatre Wallay on “Voices of Partition” in 2015.

To create the script, Alper said, she gave prompts to the Pakistani actors in Theatre Wallay to get a sense of their own stories surrounding the topic of public spaces, such as their favorite memories of a public space. She used those prompts to create a cohesive script for the production.

“We’re all dealing with — they’re really dealing with, in a very extreme way — losing public space because of so much terrorism and violence that has compromised their public spaces,” Alper said.

Similarly, Alper said she gave prompts to students at the college to write about public spaces from their perspective. The material they worked on together may be featured in the Spring 2018 tour of “On Common Ground” in the Pakistani cities Peshawar, Islamabad, Karachi and Lahore, Mulligan said.

Audrey Lang, a sophomore theater studies major, worked with the “On Common Ground” team in a stage–managing role and as a writer. Lang said it is exciting that the work could be featured in the Pakistan tour.

“It’s interesting how a project like this could connect people who, otherwise, I never would have met,” Lang said.

Before the residency, “On Common Ground” toured in Oregon in the summer of 2016.

“Before I was with Theatre Wallay, I didn’t even like theater,” Ardila said. “I was just there for a job, but they honestly made me fall in love with theater.”

She said her job was to follow around the actors and other team members to capture the trip and make a video. During the trip, Ardila said she made some of the best friends she has ever had.

“We’re all really the same,” she said. “It’s so funny how people think that we’re so different but really we’re the same. Our jokes are just in different languages.”

Canter said she had a management role in the production and spent a lot of time managing the grants. She said she also worked in publicity and public relations.

“From waking up and going to sleep, being surrounded by the artists I was working with and the art we were doing,” Canter said. “It was a nice little taste of professionalism and working on the real show.”

As the tour moves on to Pakistan in the spring, Alper said, the U.S. team will no longer be continuing with the production.

The grant does not include funding for the U.S. members to continue on the spring tour, and they all have previous obligations in the U.S., so they will not continue on the tour, Mulligan said.

Amid Cornell University’s classic, ivy-covered architecture, the distinctive lines of the Johnson Museum stick out. Inside, 33 international artists continue this powerful contrast through their exploration of the power of lines. The boundary-shifting 1947 split of Pakistan from India, and later Bangladesh, inspired “Lines of Control,” an art exhibit of more than 40 works by…