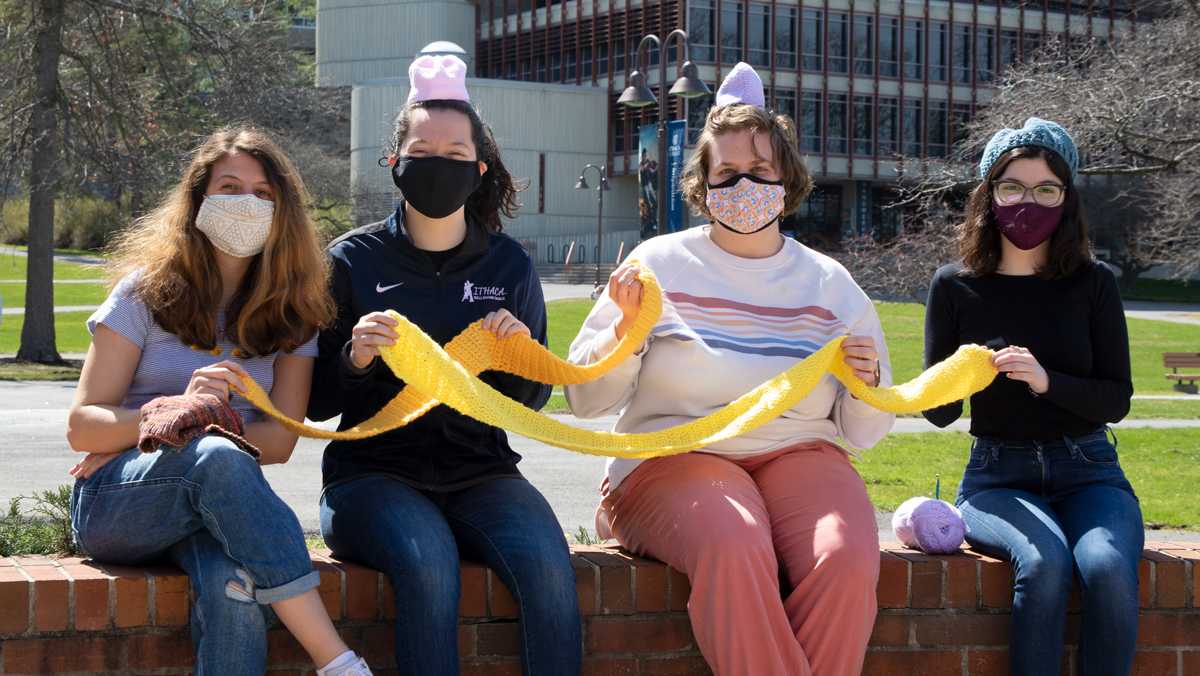 Taking a break from classes and meetings, a group of Ithaca College students can be found crocheting and knitting brightly colored hats, scarves and other items on a Thursday night. Although they are separated by Zoom screens, they still chat and get feedback from each other while they work. This is a typical meeting with the recently rebranded IC Craft for a Cause club.

Craft for a Cause is a student organization where members knit and crochet items to donate to local organizations like Hearts for the Homeless and the Ithaca Pregnancy Center. Prior to the pandemic, the organization also went to the Racker Center to make crafts alongside children with disabilities. Craft for a Cause has been operating virtually this semester, with Zoom meetings at 7 p.m. every Thursday.

Senior Nina Randazzo, president of Craft for a Cause, said the direct service component is one of the most rewarding parts of the organization.

“Our main goal is to inspire creativity,” she said. “The kids really love it, and we have a really great time.”

In the spring semester, Randazzo said the club decided that they were going to separate themselves from Project Sunshine and rebrand. The goals of the club remained similar, but Craft for a Cause focuses more on knitting and crocheting.

“Craft for a Cause just seemed like a very fitting name,” Randazzo said. “It’s all different sorts of crafting, and in the end, we are trying to do some good for others.”

Sara Schneiderman ’20 acted as co-president of the club during the transition. She said there was not a drastic change with the way the club was operating but rather a difference in fundraising and donating goods.

“We still fundraise, but we kind of have more freedom as to how we fundraise and who we give it to,” she said. “We still wanted to raise money and contribute back but with less pressure.”

Schneiderman said another difference was direct service training. While working with Project Sunshine, the club had to participate in training to volunteer. In this training, club members would have to review a PowerPoint from Project Sunshine Headquarters. Once Craft for a Cause was created, the club made its own training to address what volunteering would entail. The new training is more specific to the operation and volunteering opportunities of the individual organization.

“We were always a unique chapter,” Schneiderman said. “Project Sunshine had an amazing mission that involved volunteering in hospitals, but that was something we were never able to do in Ithaca. The logistics were just too much for us.”

Randazzo said that teaching new members online has proven to be difficult.

“Usually when I’m teaching people there’s a lot of trial and error,” she said. “I used to be able to tell someone if their stitches were too tight and if they needed to be bumped up a size and hook. It is easier to teach knitting in person rather than on a screen.”

Junior Daniella Zelikman, secretary of Craft for a Cause, was a general club member during the transition. She said the rebranding did not affect the operation of the club or her love for crocheting. Zelikman said the club meetings were a highlight of her fall semester.

“It was such a nice break from everything,” she said. “It was so great to actually be able to talk to people from Ithaca and do something I enjoy.”

The British Journal of Occupational Therapy published a study about the personal benefits of knitting. The study included 3,400 knitters across the world and showed that there is a correlation between knitting and feeling happy. The results also showed higher cognitive functioning in adults who spend time knitting.

Randazzo said the club is much more than the items that the members knit.

“We are a community service organization, but I always say we’re a social organization as well,” she said. “We get online for an hour, we talk, we chat, we listen to music as we crochet. A lot of members, even ones who didn’t have supplies yet, just come to the meetings to talk and hangout.”

Schneiderman considers this social aspect to be one of the most important parts of joining the club.

“It’s an amazing experience,” she said. “I know it sounds weird, a bunch of 20-year-olds knitting at our age, but we get to create a really great community of people who are helping each other learn how to do this awesome new skill that is really beneficial.”

Buy Nothing Project comes to Ithaca