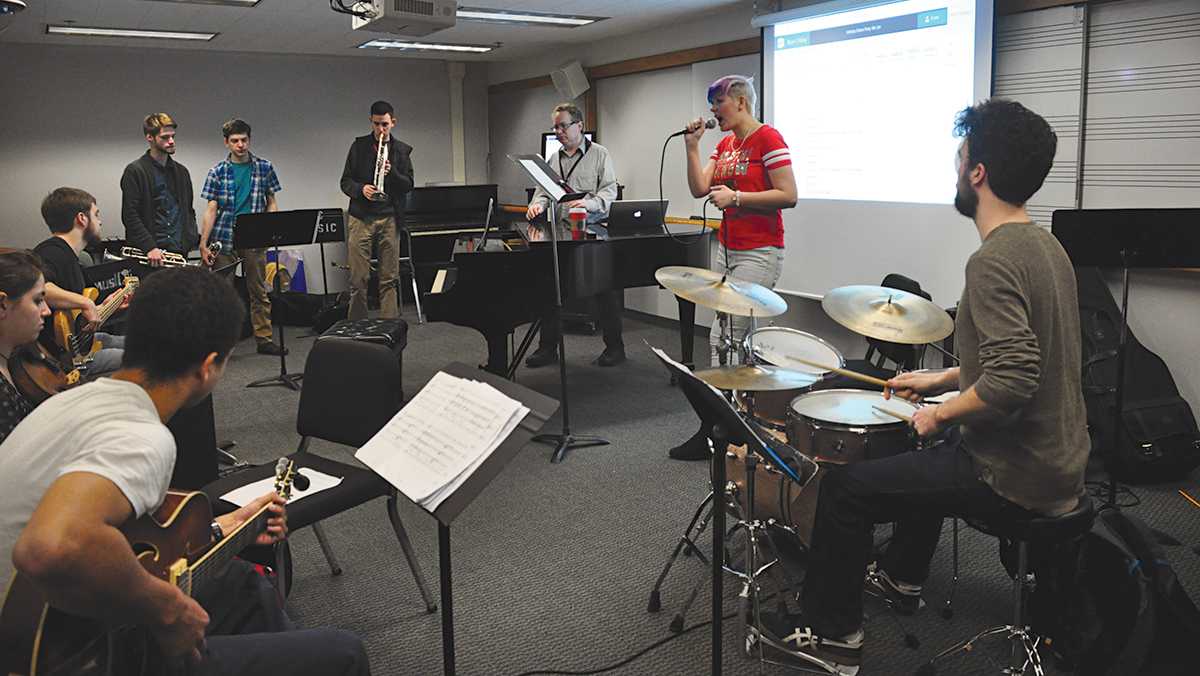 Sam Fuller/The Ithacan
Students in the music class, “IC Wedding Band” rehearse for their upcoming holiday show on Dec. 12. As part of their final project, students had to perform at an actual wedding.
By Casey Murphy — Staff Writer
Published: December 9, 2015

While many Ithaca College students are busy studying textbooks and typing up papers in preparation for final exams next week, one group of students instead began warming up their instruments and singing scales almost two months ago to get ready for a very different type of final.

Wedding Band is a 100-level music ensemble course taught by Michael Titlebaum, associate professor of performance studies, and for the nine students enrolled in the class, their final exam doesn’t involve any tests or essays. Instead, the final for this course requires the students to play a maximum of two hours at the wedding of one lucky couple, who get the performance for free.

The ensemble is aptly named the IC Wedding Band. Titlebaum, who occasionally plays saxophone with the group, said he wanted to form a course like this since he began teaching at the college in 2008 but was finally motivated to submit the proposal for the class this year for a reason that was exciting and surprisingly practical.

“Weddings are one of those memorable life moments when people will spend money for live music without skimping,” Titlebaum said. “The impetus to propose the class was actually when marriage equality became law in New York after I read an article about the potential economic benefits of gay weddings. It’s not just the gay couples themselves that are happy about being allowed to legally marry. Florists, bakers, photographers and musicians all benefit.”

Titlebaum and the students in the IC Wedding band agree that the most valuable learning experience from the class is the real-world application of skills that are learned in music classrooms.

“Students learn to perform music in social situations, including restaurants, parties, dances or at any other venues where jazz and popular music is needed,” Titlebaum said. “Students also learn jazz and popular music holistically, including skills in functional arranging, improvising, composing, transcribing and transposing music for live performance and recording. They will also get real-world business experience working directly with the couple in deciding things like song lists, timing, pacing and when to take breaks.”

In October, the IC Wedding Band played at the wedding of Brad Marzolf and Rich Anderson. The couple live in Lansing, New York, and Marzolf is a Cornell University alumnus.

Couples were able to sign up for the opportunity to have the band play at their wedding through the college’s website. They were asked to submit their names, the date and venue of their wedding, a list of some of their favorite songs and an explanation about what having live music at the wedding would mean to them.

Titlebaum said he chose Marzolf and Anderson because “they said that live music would enrich their wedding and their lives.” Additionally, the date of the wedding didn’t conflict with any of the band members’ schedules.

The performance at the wedding was reportedly a big success, and Titlebaum said Anderson and Marzolf were extremely pleased with the band.

“[The wedding] was so amazing,” said junior Laura Douthit, the ensemble’s lead vocalist. “I’ve never been so emotionally involved in a performance before. To me, it was just another gig, but to the couple, it was their big day, and since they were gay, it was the day they’ve been waiting and fighting for. I definitely almost cried when I sang their first dance. Just to be a part of that in such an intimate way was amazing.”

Senior Andrew Hedge, who is the group’s drummer, arranged some of the pieces that the IC Wedding Band played this semester. He said he learned the most from his experience arranging.

“My favorite part about being in the band is choosing songs, arranging them and then hearing those arrangements come to life,” Hedge said. “I have learned a lot about how to organize and plan music for social events, as well as things that work and don’t work when arranging music.”

Since the group already had its final performance in October, it will be performing again to end the semester. The Holiday Dance Party With the IC Wedding Band will be held 6 p.m. Dec. 12 at The Dock at 415 Old Taughannock Blvd.

Unlike the wedding, where the band performed songs chosen by the couple, the show on Saturday will feature songs chosen by members of the IC Wedding Band. Douthit said the members are looking forward to performing music they enjoy, which they don’t typically get to play for classes.

“I am so excited to perform the music that I love the most for my peers,” Douthit said. “This band has given us all a chance to get outside of the traditional conservatory music and really explore how creative we can get.”