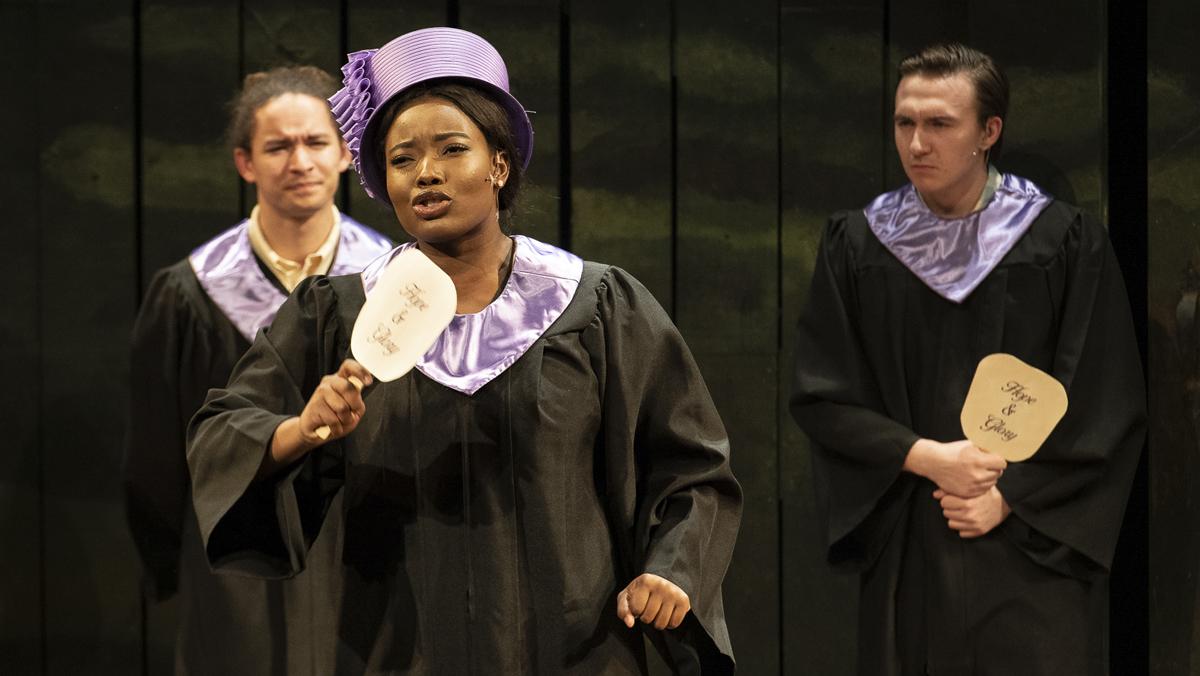 Courtesy of Sheryl Sinkow
From left, sophomores Christian Henry, Moyo Odulaja and Justin Shondeck perform in "Violet." The musical takes place in the South 1964 after the passing of the Civil Rights Act. The main character, Violet (senior Keara Byron) goes on a journey to try to heal a scar.
By Olivia King — Staff Writer
Published: April 11, 2019

Violet Karl, on a journey about pain and healing, sings that she wishes to look like anyone but herself. Violet has a large scar on her cheek, though no makeup is used to create it. It is presented to the audience as more of an emotional scar, though she obtained the scar from an accident involving an ax blade. Following the accident, Violet believes she is not beautiful, as people around her recoil at the sight of her scar or make fun of her. 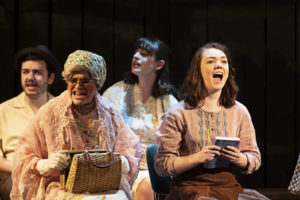 In 1964, just following the passage of the Civil Rights Act, Violet boards a bus from North Carolina to Oklahoma. Violet has tried everything to heal her scar and decides to go to Tulsa to see a television preacher, who can supposedly heal her, as a last hope. She believes that by going to Tulsa, she is on her way to a better life.

On the bus, Violet (seniors Keara Byron and Robin Mazer) connects with two other characters, Flick and Monty, played by seniors Joel Oliver and Keenan Buckley. The two friends are soldiers — a sergeant and a corporal, respectively. Byron said the relationships that Violet builds with Flick and Monty are the heart of the show.

She said Flick, as an African American, and Violet, with her scar, are judged by most people for their physical attributes. She said that when Flick and Violet talk with one another, they see more than those physical characteristics. The artistic choice not to show Violet’s scar to the audience members allows them to see beyond her physical scar.

“I love that you don’t see the physical scar and the audience is required to imagine it,” said Byron. “Then, the audience can see Violet for who she truly is and not be distracted by something physical on her face for the whole show and only see the scar.”

“Violet” features music by Jeanine Tesori and libretto by Brian Crawley. The college’s production is choreographed by Michael Blake, assistant professor in the Department of Theatre Arts.

“Violet’s final choices are different from in the original story,” she said. “The change is for the better. It makes it a more compelling and interesting story.”

Violet is a deeply pained character, desperate to look like the women she sees in the movies. Her scar causes her emotional and physical trauma. She knows what people see when they look at her and believes that no one will want her when she looks the way she does. She devalues herself. 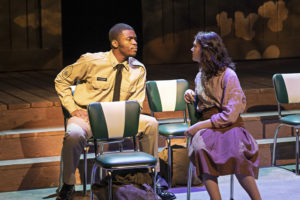 From left, Flick (junior Joel Oliver) and Violet (senior Keara Byron) develop a friendship and understanding of each other despite their differences.

Though Violet is the protagonist of the story, she is flawed. As a white character, she exhibits racial biases in the show. Desperate to have new skin, anyone else’s skin, Violet still says that she would not want Flick’s dark skin. When Flick storms off, Violet quickly realizes she was wrong in making that comment and apologizes.

Senior Elliot Vitaz is the show’s dramaturg. As the dramaturg, it is his job to build the world that the show takes place in. He said a major part of his job as dramaturg is to make sure that everything is aligned with the world that has been set up, with help from the text, as the play comes alive.

Vitaz said the history of the civil rights movement is also at the heart of the show. This history shines through a few times. Early on, an employee at a diner makes a comment about Flick being African American and being a soldier. This history is also present in the relationship that Violet and Flick develop, as they put aside their biases and learn to appreciate each other’s physical attributes.

“I hope what people take away is seeing how little we’ve come, and how far we’ve come since 1964,” he said. “And how we need to keep moving.”

Estey said the location and time period majorly influenced creative decisions made during the production of the show.

The set’s backdrop is the wall of a rickety barn painted with a mountainscape. Violet, in a faded pink blouse and long brown skirt, opens the show sitting on a lone bus stop bench. She boards the bus, which is represented by rows of green and white chairs at the center of the stage.

“That rural countryside of the South really inspired the set,” she said. “Costumes were, of course, inspired by the time period. … Our characters are mostly soldiers and then Violet, who isn’t necessarily affluent. So, the show is inspired by kind of a different thing than what you think of when you think of the ’60s. It’s inspired by what people were really wearing, not just the wealthy. It’s not just miniskirts and go-go boots, it’s really what middle America was doing in the ’60s.” 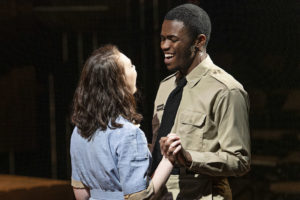 From left, Violet (senior Keara Byron) and Flick (junior Joel Oliver) learn to relate to one another and become friends.

Estey also said the set design was impacted by the bulk of the show taking place on a bus. She said it was a fun challenge to make the bus as active and engaging as possible.

He said the production of the show began with talks about design and with auditions, followed by casting. He said that after casting, music rehearsals began before blocking and staging. He said that once the show has been blocked, they began to run it in full.

Vitaz said the text of both the musical and the short story was also a big part of creative decisions. He said a lot of conversations about the text and what it meant took place.

“Everything on stage comes from the script,” he said, “Whether those are literal things or interpretive choices. In many ways in modern theater, the text is the guiding light that informs everything we do. What is interesting about ‘Violet’ is we also have the short story.”

Estey agreed that the feeling of wanting to be noticed and understood is at the heart of “Violet.”

Estey said one of the more difficult scenes to put together comes when Violet finally gets to Tulsa due to the emotional range of the scene.

“When Violet is finally in the chapel and ready to be healed and dealing head-on with the trauma that she’s held inside her relating to her accident all these years,” she said, “Both Robin and Keara did a beautiful job tapping into emotion. It’s always hard to do that kind of work, but they’ve done it beautifully. There are so many layers to that scene that it took a lot of time to delve into it.”

Byron said that for this scene, she had to do a lot of research on trauma and post-traumatic stress disorder to try to understand what it would be like to go through what Violet has and to try to physicalize those feelings.

Byron said that to prepare for the role, she spent a lot of time thinking about the way Violet would walk and move as well as the Southern dialect used by the characters in the show. She said she took a lot of context clues from the script and short story to get into the time period the show takes place in.

Vitaz said the show is being advertised as a personal journey externalized.

“It’s about how we deal with our lives and getting the things that we want,” he said. “How we deal with being or not being the person we’re told we are.”

Tickets for “Violet” can be purchased at https://tickets.ithaca.edu/violet, over the phone at (607) 274-3224 or at the college box office in the Dillingham Center.