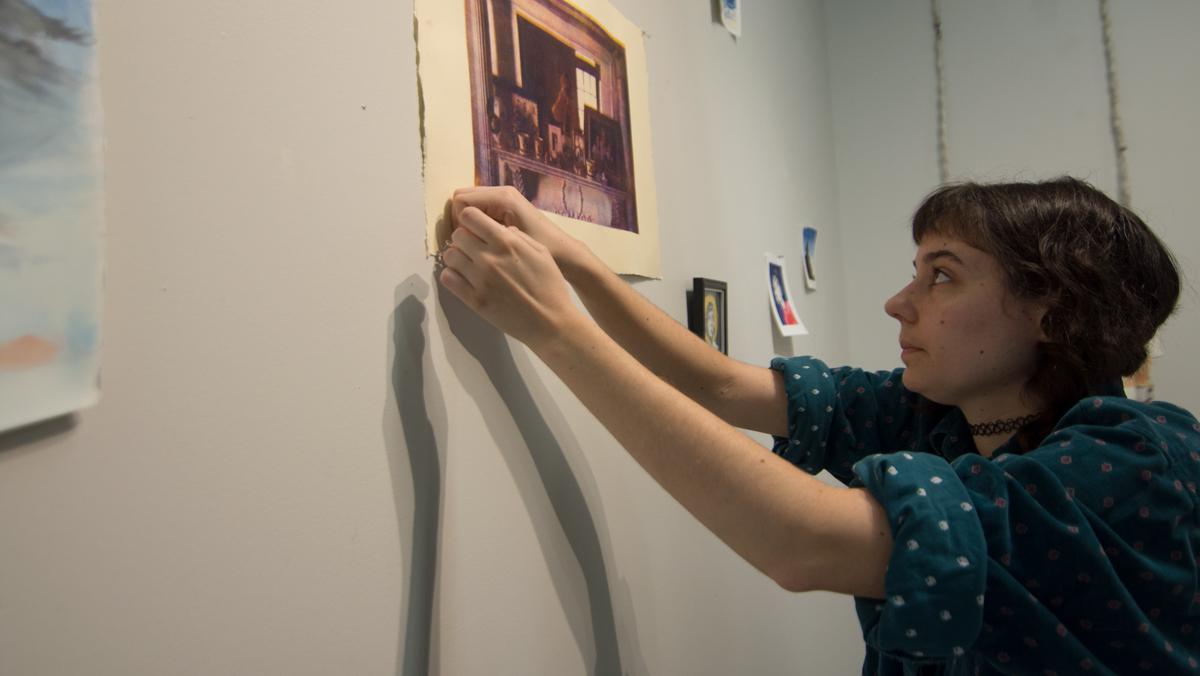 Ted Zerivitz/The Ithacan
Senior Serena Columbro working on her series "Disparate Images: Reflections on Memory." The series is a nostalgic look into her own past.
By Kate Nalepinski — Senior Writer
Published: August 30, 2017

Three Ithaca College students sit in an art studio on a mid-July afternoon. Senior Serena Columbro studies a photo from her childhood, reflects on her past and recreates the image onto white paper with watercolor paints. Near her, senior Kaylee Warner visualizes a skeleton in her convoluted oil painting, forming a figure from her previous aggressive marks. On the other side of the studio, senior Marilyn Markech adds a delicate strip of white paint onto a vivid pink canvas, adding the finishing touches to a meticulous painting that addresses mental health.

Though these three projects focus on vastly different subjects, they share one thing: They were all conceptualized, created and brought to life through the H&S Summer Scholars Program, which allows students in the School of Humanities and Sciences to pursue a paid project relevant to their interests with help from a mentor.

“When you have the amount of time they have, you have a lot of time to explore an idea,” Pamela Drix, lecturer in the Department of Art, said. “They’ve found out more about themselves, and what’s important to them.”

The students’ projects will be displayed at 5–7 p.m. Sept. 1 in the Creative Space Gallery located in Suite 50 in the South Hill Business Campus. The gallery will also be open Sept. 2 and 3 from noon to 5 p.m.

“There’s sort of a delicate balance in my paintings of that beautiful color and all those details and stuff,” Markech said. “It’s enticing. It’s inviting. … It looks celebratory. I think that draws in the viewer, but the more they look at it, they might realize there are some darker themes. I think that’s what experiencing mental illness is like. Every day is hard, but at the end of the day, you have to find happiness in spite of it all.”

Markech said she was grappling with her mental health for most of 2016. Sarah Sutton, assistant professor in the Department of Art, taught two of Markech’s art courses that year — Intermediate Painting in Fall 2016 and Advanced Drawing in Spring 2017 — and worked closely with her, which motivated Markech to ask Sutton to be her mentor.

“She’s been there through … my realizations and coming to terms with my mental health,” Markech said. “I feel like we’ve gotten to know each other very well, and she understands my work. It seemed like the natural choice to approach her and ask her to be my mentor.”

Sutton also worked as Warner’s mentor through the summer. Sutton said that Warner’s project, “Embodied Landscapes,” is a post-apocalyptic journey in environmental disasters.

“She plays with melting figures into this landscape space,” Sutton said. “They start in a loose narrative,  and then they get really expressionistic and visceral.”

Warner, an environmental studies major and an art minor, said she wanted to use her art as a channel to discuss environmental issues.

“I had to find a way to make scientific information accessible and reachable to people,” Warner said.

Warner’s process is also part of the art. She said she uses abstract figures to convey Earth’s potential decay. After flinging thin paint onto a canvas, she eventually finds a figure within the haphazard design.

“It morphs into its own form,” she said. “We have this idea that nature is separate from human life. But all our materials come from nature. The fact that we are existing and modifying the earth is part of nature, regardless of who’s in charge.”

Drix, who worked as Columbro’s mentor for the summer, said Columbro’s gallery “Disparate Images: Reflections on Memory” is a nostalgic look into the artist’s past.

“Because she has these childhood memories, there’s quite a literal narrative, but she’s trying to extract that narrative a little more and using the dislocation and negative spaces as part of a new story,” Drix said. “She’s stepping into a new area that’s a bit more abstract from her experience.”

To pursue her project the way she desired, Columbro said, she had to study her past and introspectively address her internal conflicts. This led to a roadblock in her work: A lack of structure in her summer schedule was an additional task she had to overcome.

“This summer, I was wrestling with several things: nostalgia, idealization and identity,” she said. “You have to be self-motivated for the work you do. We’re so used to getting deadlines and guidelines, and to get away from that was a challenge.”

“[This] is really just the tip of the iceberg about what they’ve discovered about themselves,” she said. “They can continue after the summer, possibly to do more graduate work — and they already have a handle on what it means to be an independent researcher and art–maker.”