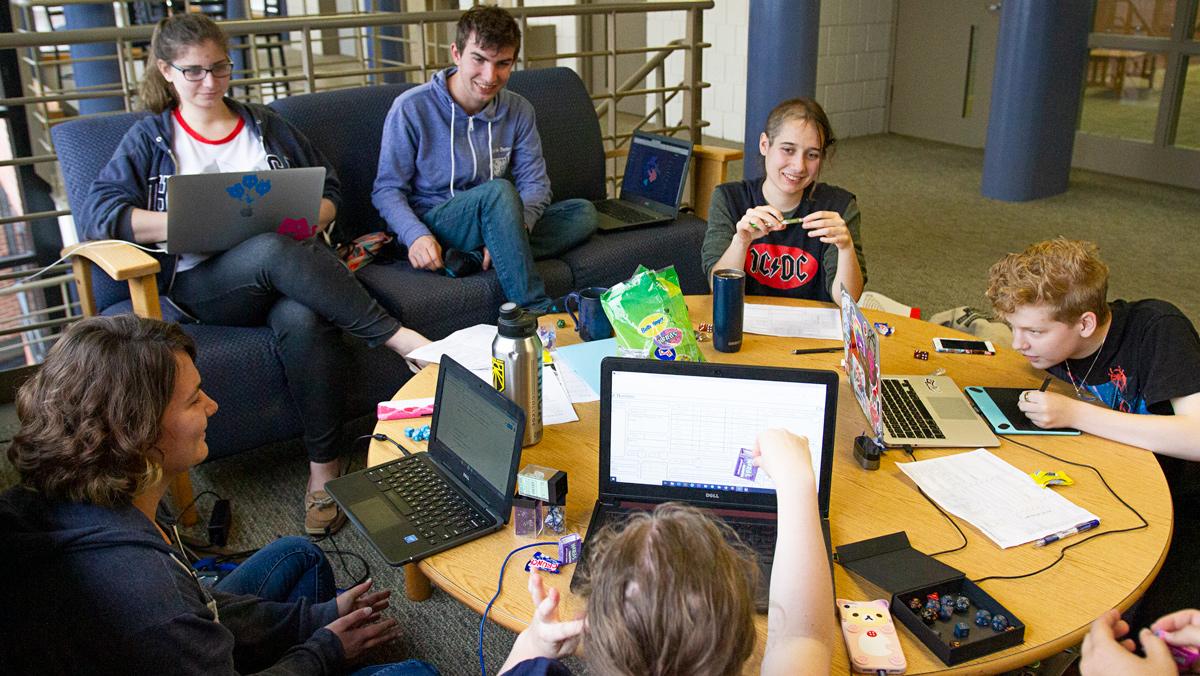 Inside Emerson Hall at Ithaca College, eight friends sat, wrapped in blankets and sweatshirts around a table in a warmly lit room. The narrator of the game told them of a massive gas planet they must land their starship on. The group focuses on one player because rolling the dice low could jeopardize the whole mission. The dice tumble into a total of seven. The narrator smirks, and everyone goes quiet, directing their attention and preparing for whatever is next.

Every Saturday, these students play “Stars Without Number” together, a tabletop role-playing game (TTRPG) set in a sprawling, open universe. Games like these have existed since 1974 when Dungeons and Dragons (D&D) was published as the first tabletop role-playing game. Hundreds more TTRPGs have been published since then as the community of players continues to grow. In the past five years, the TTRPG community has skyrocketed in popularity after the release of D&D Fifth Edition in 2014. There are an estimated 13.7 million players worldwide of D&D alone.

At the college, the TTRPG community exists through organized clubs and small, personal groups. Personal groups outside club activities are few and far between. One of these groups has been meeting weekly for almost a year now.

Sophomore Danny Igoe, the game master (GM) of the group, is in charge of running the game and telling the story. A GM builds the world, formulates the story and fabricates the nonplayer characters that the players interact with.

Within the game, every player designs their own character with individual personalities and backstories.

“Looking at the choices people make, how their personas impact their characters, all these small attributes, I get to see them played out,” sophomore Cade Ferreras said.

Their characters demonstrate the expansive and peculiar elements of the “Stars Without Number” universe. Every character was made by the students who play. The band of colorful characters includes Chen, a birdman who is addicted to reading and substance abuse; Gordon “The Ram” Z, a universally known chef who became a space pirate; Aquilla, an archaeologist and religious fanatic; Winnie, an ex-guard of a space prison; August, an extremely smart sharpshooter and revolutionary; Caspian, an aspiring artist-turned-thief; and Atlas, a household android that started a robot revolution.

The players had in-character talks about what to do now that their pilot was dead, they had an odd bird person stowaway and they were stuck out in space. The group laughed and talked as they played, and afterward they said that “Stars Without Number” is a way to destress for them.

Recent studies have shown that playing TTRPGs can help reduce depression and improve mental health among players. They are reportedly so effective that some psychologists use them as therapy.

Igoe said it is easy to let go of stress when he is placing his focus on the game.

“As the session goes on, the characters start to meld with the individuals playing with them, and you get into a really good groove,” Igoe said. “Once you get past that first hour or so and everyone gets really into it, it becomes this almost seamless story. It’s really excellent.”

Although players have their individual sessions with their friends, TTRPGs have also become a way for people to connect with other like-minded individuals, especially because of the Internet and the rise of online TTRPG resources like Roll20. These tools helped establish TTRPGs as an element of cultures all around the world. Marion Deal, a freshman at the University of Rochester, said that playing TTRPGs helped him connect to people outside of the United States.

“I was staying in China studying at a kung fu academy for a few months, and there were people from all over the world with different backgrounds, but there were a few people who knew D&D and RPGs, and that was a very delightful community,” Deal said.

Sophomore Anna Niedzielski is another member of the “Stars Without Number” group, and she said that being a part of the TTRPG community has also helped her connect with people in surprising ways.

“Even if you make a joke about something like alignments, chaotic neutral jokes or dice, you can start this instant connection with certain types of people,” Niedzielski said.

The Internet has also made it possible for people to become involved in the TTRPG community without having ever played a game. Shows like “Critical Role” and podcasts like “The Adventure Zone” garnered massive followings and allowed people to become familiar with the culture.

“It’s how people interact with myth and with character in these fantastical situations,” Igoe said. “This is part of why humanity does these kinds of stories and why we’ve done it for thousands of years. This is a part of that storytelling tradition.”