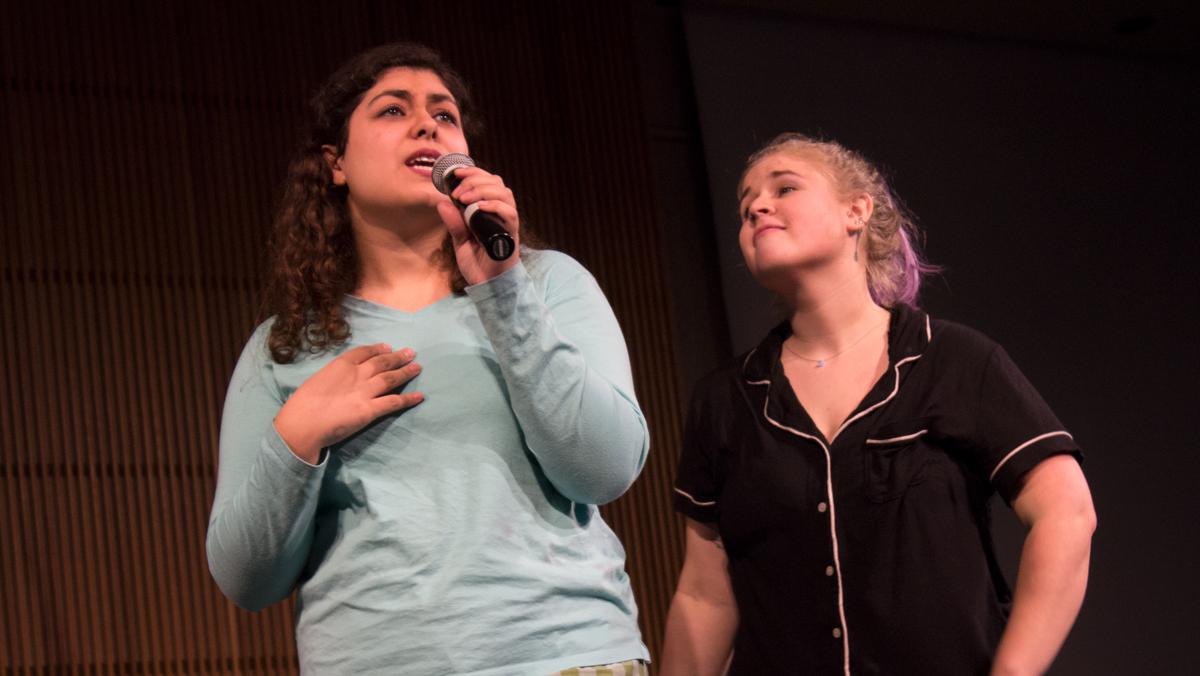 A group of people marches around the stage. They wear dresses, jeans, leather jackets and colorful lipstick. As they walk, they shout out the different things that they wear on their vaginas. This was one of the scenes performed in this year’s performance of “The Vagina Monologues” at Ithaca College.

“The Vagina Monologues,” written by Eve Ensler in 1996, is a series of monologues based on interviews Ensler conducted with hundreds of women talking about their sexuality, and embracing their bodies and themselves. The women interviewed included children, young adults, elderly women and transgender women, from different countries and backgrounds.

IC Second Stage hosted the show at 2 p.m. and 6 p.m. Feb. 18 in Emerson Suites. The club hosted the show through the global V-Day organization. The organization is dedicated to ending violence against women and girls worldwide. Approximately 100 people came to the show and almost $270 was raised. Proceeds from the show went to the Advocacy Center, which provides domestic and sexual assault services in Tompkins County.

This year marks the 20th anniversary of the show. As part of this, the directors at the college chose to write this year’s spotlight monologue through the cast’s personal stories. Each member shared their stories, which were then compiled together to form the Stand Up monologue.

The spotlight monologue is the main one of the show. It is related to the chosen theme of the year and can either be a prewritten monologue, a monologue written from testimonies or a personal story turned into a monologue.

The spotlight highlighted sexual assault and this year’s theme of “rise, resist, unite.” The group was inspired to write the monologue following the #MeToo and Time’s Up movements that have included many sexual assault allegations against celebrities and other public figures.

Sophomore Reagan Black was the assistant director of the show and said they chose to use personal testimonies in the spotlight to be more inclusive.

“We’re really trying to bring peoples’ personal experiences into this because we want this to be a community for all vagina-havers, not just cis women,” Black said.

Sophomore Suzannah Van Gelder was the director of the show and said she felt the themes of this year’s show aligned with the mission of the Advocacy Center.

“I think that the services that the Advocacy Center provides connect fundamentally to the theme of this year’s production,” Van Gelder said.

Black said the Stand Up monologue embodies this year’s “resist” theme, with the actors standing together against misogyny and sexual assault.

Before the spotlight monologue, a student film titled “Me Too” by junior Hannah Crisafulli and freshman Kate Dotten was shown. The film documents stories of sexual assault experienced by students at the college. Actors stood on–screen in their place for anonymity.

“I thought that it fit so perfectly into the narrative of our show and the sense of community that we’re trying to build,” Van Gelder said.

One monologue performed this year, “They Beat the Girl Out of My Boy … Or So They Tried,” highlights the stories of multiple transgender women. The women share their stories of self-hatred, acceptance, self-love and the dangers of being a transgender woman, one citing her boyfriend being beaten to death for dating her.

Ensler added this piece to the show in 2005. This year, the directors said they tried to be more inclusive of transgender people. Black said this was limited because of who auditioned, but there were three non-binary performers and one agender performer in the show.

“Although “The Vagina Monologues” has room to grow in the sector of trans inclusivity, we have tried to do our part in making it as safe and as truthful to trans experiences as possible,” Van Gelder said.

Senior Courtney Ravelo, an actress in the show, said she liked the collaborative effort of the show, and that the show has helped her grow.

“We’re kind of working through our own traumas by telling these monologues to each other, and I feel like I’ve grown, even though it’s only been a month of rehearsals,” Ravelo said.

This was Ravelo’s first year performing, but she said she read the play and saw it performed during her freshman year at the college.

“I feel like I’m a little bit more open about the things that have happened to me, talking about things for the benefit of other people just so that other people know that they’re not alone, that you’ve been there too,” Ravelo said.

Senior Shyanne Ruiz talks about how her involvement in the Vagina Monologues has encouraged her to fight against women’s violence with the One Billion Rising flash mob on V-Day.