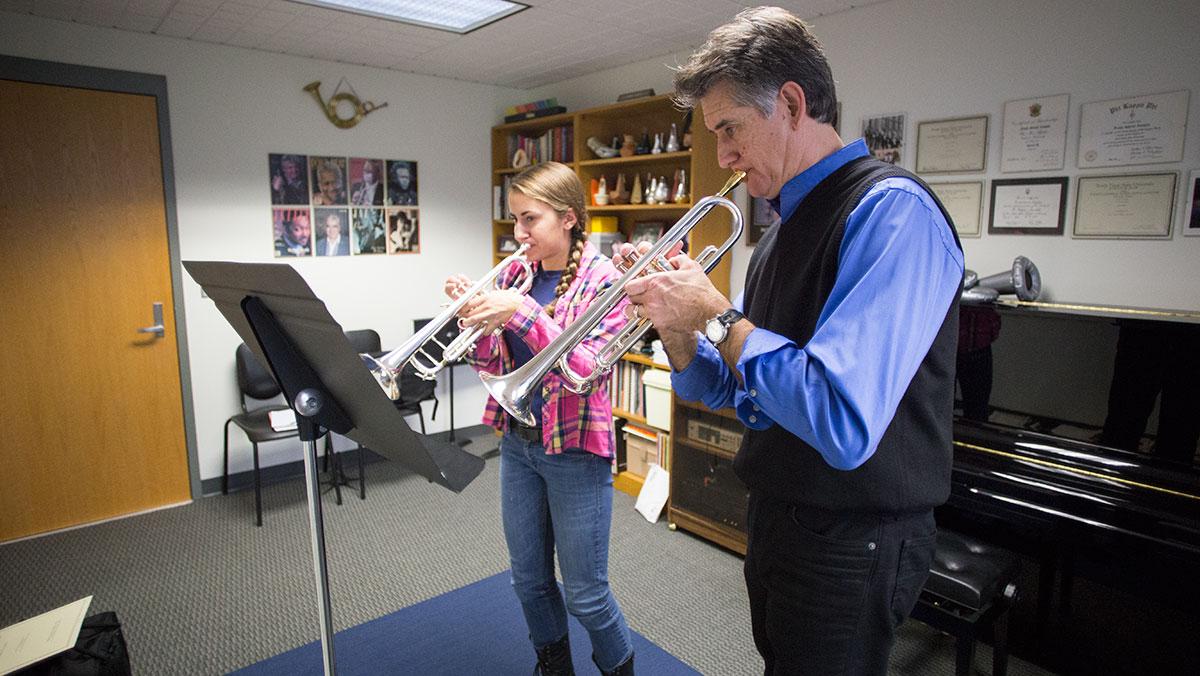 Frank Gabriel Campos, professor of trumpet performance at Ithaca College, had one of his solo performances featured Oct. 16 on the National Public Radio program “Performance Today,” and he has been receiving nationwide acclaim and interest as a result. Over the past four years, his performances have been featured 14 times on the syndicated radio program, and he conducts clinics in the music department.

Staff Writer Tylor Colby sat down with Campos to discuss his work as both trumpet player and instructor, his performances for NPR and how Campos crafts solo performances of multi-layered classical, jazz and pop tunes.

Tylor Colby: How did you start having your performances featured on NPR?

Frank Campos: Neva Pilgrim of the Syracuse New Music Society sent in some of my solo pieces to the show four years ago, and they were played on the air. Soon after, Fred Child, the host of the live performance program “Performance Today,” emailed me requesting more of my recordings. Fred has been very generous on the air, mentioning Ithaca College and my book several times, and he even read some of my RateMyProfessors.com comments on the air, which was very funny.

TC: Are all your featured performances on NPR done solo?

FC: I also have a duo with a professor at Ithaca College, Dr. Nicholas Walker, who plays string bass. But basically the work that I’m doing is solo performance-based, covering everything from classical to jazz. I’m just playing by myself, an entire program of these haiku covers, if you will. I call them that because you’re cutting out anything but one note at a time. There’s no harmony, so it’s a different concept.

TC: How do you capture the essence of an entire song or piece in one note?

FC: I play the tune, and then I go through a series of variations on it, changing keys. I’m using  the same chord changes, but I’m making up my own melodies. Every performance is different.  It’s all improvised, although there are particular things I like to do in each piece. The listener is not listening to harmony, like in a pop tune, but following one line that is giving you all the  information about the harmony, melody and background figures. You think, what’s the most important thing in any given moment that identifies the piece? It’s not just playing the melody, it’s playing the whole world contained in a single line.

TC: Do you consciously arrange these tunes as you go, or is this something premeditated and rehearsed?

FC: I’ve been working on this stuff for a long time. The physical requirements of playing trumpet for a long time are very high, so it’s almost like marathon practice sessions when I’m practicing for concerts because I have to be able to play the instrument for a long time, and that’s not easy to do on the trumpet. But over the years, I used to practice late at night in a church and choose material that I love. Whatever it is, I create a single-line version of it, and it’s all done by ear. Over a period of time, I hone it and it becomes a beautiful little piece that I can present in a concert situation.

TC: You seem to have a wide, diverse array of music being performed in one concert. How do you tie that together?

FC: I love a lot of variety. Right next to a Bach piece, I’ll put an improvised piece like “Spain” by Chick Corea, and then something upbeat and then something very lyrical and beautiful — just the idea of these short pieces, all with a lot of contrast. Don’t forget, audiences are only going to be hearing trumpet for that hour, and after a while the ear gets tired of that timbre. So I try to veil the sound and change it slightly for the different pieces. I use bell mutes, and even the flugelhorn, a cousin of the trumpet but with a deeper sound. The idea of having a lot of contrast is what interests me, and my audiences love that.

TC: Where can people hear your music, other than on NPR?

FC: As a result of this wide exposure, I have had a lot of contact from people around the country asking if I have any recordings available. I have done a lot of recording, but only now am I recording my own music. I am about halfway through a solo CD that will be completed by next spring. It has been so exciting to learn that there are listeners out there who are looking for my music, and that has spurred me to finally finish my own project. I also have several videos of live performances on YouTube on my channel, Frank Gabriel Campos.