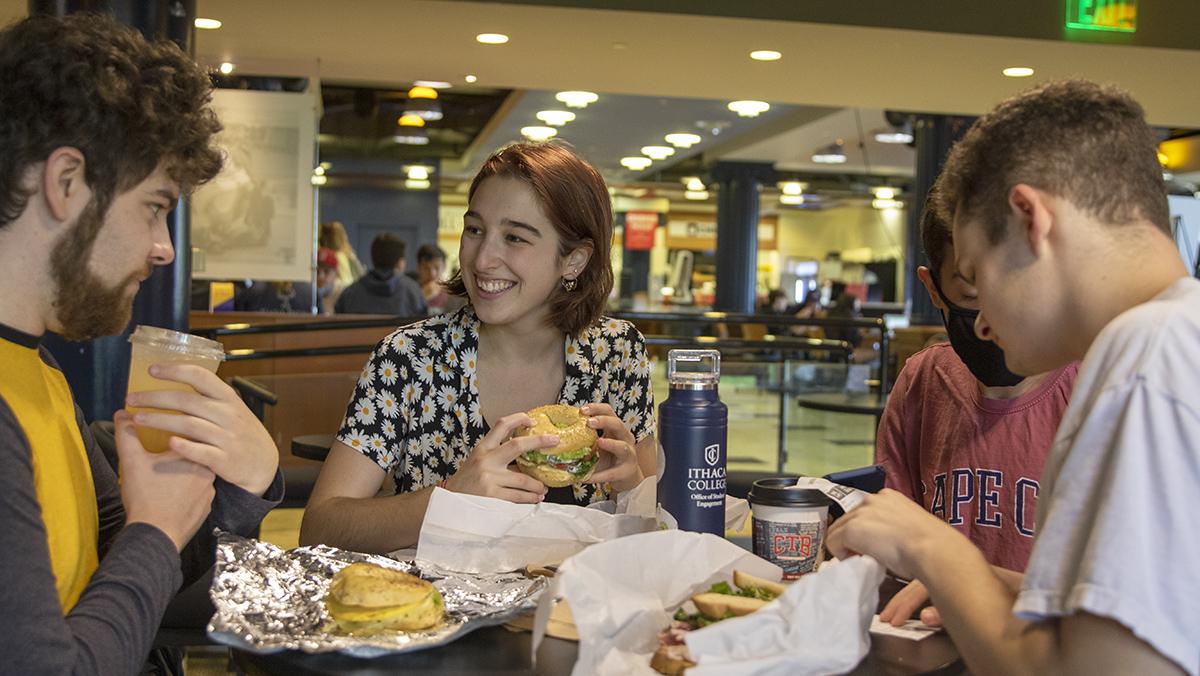 In a town known for its natural wonders –– waterfalls, gorges and incredible hiking trails –– Ithaca has developed a semi-accurate stereotype. The hippie, tree-hugging aesthetic that Ithaca often gets pegged for has manifested in its culture — especially in its restaurants.

Veganism is the dietary practice of abstaining from all animal derived products. While many vegans take the diet to another level by eliminating all animal products from different aspects of their lifestyle, the baseline of the culture revolves around the food.

Julia Lapp, associate professor and chair of the Department of Health Promotion and Physical Education at Ithaca College, said that while the term “vegan” has gained popularity, being vegan can look different for everyone.

“Vegan means that you’re just not eating any animal products whatsoever,” Lapp said. “Like everything else, you can go as far with it as you want.”

A survey from 2004 to 2019 found that there was a 300% increase in the number of vegans — people eating a completely plant-based diet — in the United States. This increase is felt in the city of Ithaca and within the college community, as more students are opting for the vegan options in the dining halls. Off campus, vegan restaurants are popping up downtown.

Lapp agreed that Downtown Ithaca is starting to be more reflective of this increasing vegan community.

“Yes, there is an increase of vegan restaurants in town which is fabulous,” Lapp said. “I’m not vegan, but I guess I am veganish. There’s definitely been a rise in people following vegan diets over the past decade, so the rise in restaurants makes sense.”

Owned by Kim Engelheart, Angelhearts Diner opened in Ithaca in Aug. 2019. The restaurant specializes in vegan comfort food made from scratch.

“I opened the diner because I wanted to create a place that was inviting to everyone and would encourage more people to try vegan food,” Engelheart said via email. “Comfort food speaks to all.”

Many vegans adopt the diet out of protest of the animal cruelty in the animal agriculture industry. Junior Katherine Fleming said she went vegan after watching documentaries on that very topic.

“It really changed my perspective on how we treat animals in the food industry, and I couldn’t contribute to the cruelty that goes on there,” Fleming said.

Junior Maddy Leitner, who has been a vegetarian since birth but now eats vegan, said she is passionate about spreading awareness about the positive benefits that going vegan can have.

“I basically tell people the big three: I do it for the environment, for my health and body and for the animals,” Leitner said. “Most importantly, for the animals personally.”

Regardless of their motivations for the dietary guidelines, vegans at the college have found a community of each other. Junior Cora Payne said she appreciates having a community on campus of people who share this lifestyle.

“In comparison to other areas, like where I live at home, now at Ithaca College in every room that I’m in whether it is for a class, party or a club there’s always other vegans,” Payne said. “That’s something I have never really experienced anywhere else.”

Junior Kaylee Arnold, who grew up vegetarian, said she primarily eats vegan in the dining halls at the college. She also said she is impressed by how much the market for meat alternatives has expanded within the past couple years.

“When I was a kid, we didn’t have Beyond Meat,” Arnold said. “ I think it’s crazy that if you go to the freezer section of the grocery store, there are so many different [meatless] brands … you have things that aren’t supposed to taste like meat at all and things that are supposed to bleed like a real burger.”

There is a clear trend that younger people are growing more open minded about veganism. A survey by BOL Foods found that 44% of people ages 18-24 think that going vegan is cooler than smoking.

Sophomore Abigail Hoffert said she tries to convince people to make the switch to vegan through word of mouth.

“I have convinced a lot of my friends from home to go vegan by showing them how a plant-based diet is beneficial to the environment and to animals,” Hoffert said via email. “I also try to show people how it can be very simple to eat a vegan diet if you plan it correctly.”

Lapp also said that now it seems easier than ever to be vegan with the increase in information and options.

“And now that there is so much more information about vegan diets and the benefits, there’s so many more options like these impossible burgers and all kinds of products so it makes it much easier to be vegan than say twenty years ago,” Lapp said.

Although ultimately a positive problem, the rather rapid increase of students on campus opting for vegan meal options can be a double-edged sword. Fleming said she has often encountered a shortage of the designated vegan option in the dining halls due to their popularity.

“Sometimes I’ll go and they’re just all out of whatever the vegan option is,” Fleming said. “I remember freshman year … When I was just vegetarian, I was mostly eating the vegan meals. And it depended on the meal, when it was the [vegan] mac and cheese, they always ran out.”

Arnold said the dining halls do not have the best options for a non-meat eater who tries to limit their soy intake.

“Freshman year, sometimes the dinner would be vegetables, rice, and this tofu that they would serve that was just soaked in soy sauce to the point where it was almost inedible,” Arnold said. “They’ve stopped serving it as they’ve switched providers once or twice.”

Leitner said that being vegan makes her feel good about her choice and has helped her find a sense of identity.

“I really just love not eating animals,” Leitner said. “That’s honestly a really big part of who I am and I love being a part of a good change.”