Vendors at Ithaca Farmers Market share the stories behind their products

The Ithacan gives a quick look at a few of the many local vendors at the Ithaca Farmers Market, located in Steamboat Landing Saturday and Sunday, Dewitt Park Tuesday and Thursday and East Hill Plaza Wednesday. 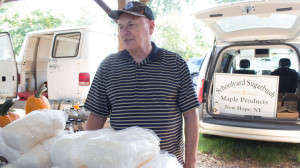 Schoolyard Sugarbush, a family-owned and operated maple business, offers a variety of maple syrups and maple products, which are sold at the Ithaca Farmers Market every weekend. Don Weed, operator of Schoolyard Sugarbush, said he began making maple syrup when his youngest daughter, who was homeschooled, needed something to do to stay busy. The name comes from where the business began: in the yard of a one-room schoolhouse.

“She did maple syrup for a school project, and then some years later it became a living for five of the family members,” Weed said. Weed said he started the business about eight years ago after recovering from a cerebellar stroke. “You kind of work with what you’ve got, but it worked good for me,” Weed said.

Schoolyard Sugarbush harvests from about 23,000 trees. Although the methods of collecting and boiling sap have changed over the years, the family wrote on the Schoolyard Sugarbush website that one thing remains the same: quality maple syrup. At the Farmers Market, the bestseller is medium-amber syrup. The largest size of this rich syrup comes in a glass jar with a loop handle. Weed’s products are also critically acclaimed.

“Our maple creams have won the state fair award three years in a row,” he said. “The sugar has won first place several times. In the summertime, our best items are the cotton candy.” Weed said he loves interacting with customers at the Farmers Market. “It gives us an opportunity to meet the public, try new products and see consumers’ reactions,” he said. 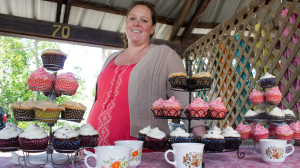 Tucked away in a quiet, cozy corner at the far end of the Ithaca Farmers Market is Kirsten Elrod of KP’s Cakes and her charming spread of mouthwatering cupcakes. Elrod said her weekly booth at the market began merely as a hobby.

“I would bake at home all the time, and no one would be around to eat them,” Elrod said. Involvement in the Ithaca Farmers Market runs in Elrod’s genes, as her mother was both a vendor and a manager for many years.

Elrod applied to become a vendor at the market two years ago and has been selling her cakes at the market since. Elrod even supports the Farmers Market through her cupcake baking by sourcing all of her ingredients from the other vendors on Saturdays before she sells her cupcakes on Sundays.

“I come on Saturdays and get all my ingredients and see what people have, and then go home and create cupcake ideas around what I bought,” she said. Unlike ordinary vanilla or chocolate cupcakes, KP’s Cakes offers cupcakes in a variety of flavors such as peach cobbler and mint chocolate chip. Elrod also likes to change her flavor selection each week and is constantly inventing new recipes.

“Because I use all local ingredients, I use what’s in season and I switch it up every week,” Elrod said. Seasonal flavors, such as strawberry basil in the summertime, keep her flavor selection from ever being exactly the same week to week.

Demand for Elrod’s creative seasonal flavors begins early. “When it gets a little bit cooler, I’ll start doing a pumpkin, and then I have a sweet potato with maple cream cheese that everyone loves, too,” she said. “People are already starting to ask for that one.” 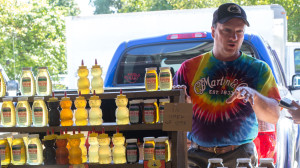 The honey jars gleam shades of gold and dark amber as the sun crests to noon over the pavilion booth where Waid’s Honey and Candles is set up at the Ithaca Farmers Market. Owner Craig Waid leans against the shelves, advising his customers on the different flavors and the best ways to soften crystallized honey. The family bee business began 40 years ago with Waid’s father, Duane Waid, a printer in the Ithaca area. He became interested in beekeeping after proofreading a book on the same subject. He started off with a couple hives, which multiplied to 300 within a few years. They started by selling plain comb honey.

“You don’t need as much to do that,” Waid said. “All you need is a knife.” Now they have honey sticks, beeswax candles and pollen, used to boost energy and provide relief to those affected by seasonal allergies. They also have different honey flavors, from basswood to strawberry. Waid said his favorite honey is the fall flower. “The taste lingers longer than any of the others,” he said.

“You learn something new from them every day,” Waid said. “It’s fun to watch them. They’re like big old airplanes coming in with pollen loads. So it’s a lot of fun.” 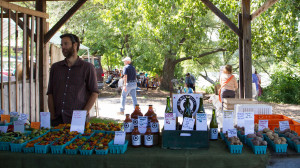 Daring Drake Farm is among the bustling stands of the Ithaca Farmers Market, stocked with a colorful array of seasonal apples, pears and berries, along with ciders and vinegars. The farm is family owned and includes a duck flock for egg production. Farm owner John Reynolds studied plant breeding at Cornell University. He started Daring Drake after working in commercial orchards and vineyards across New York and Pennsylvania.

“I was always around fruit when I was young; it’s sort of all I’ve known, and I’ve always been fascinated with it,” Reynolds said. “I’ve always wanted to make wine out of tree fruit as opposed to grapes.”

Among the baskets of tree fruits and casks of vinegars is Reynolds’ favorite product: perry, a fermented-pear alcohol. Reynolds said turning one of his favorite fruits into a beverage that tastes good is rewarding. Daring Drake sells at multiple locations, but Reynolds said they like the Ithaca Farmers Market because of the diverse group of consumers and the fact that they can receive feedback on the products they put so much effort into.

“It takes a long time to get to that point where you can add value-added products, and perennial fruits take many years to let you get a crop,” Reynolds said. “There is a lot of value in these products.” 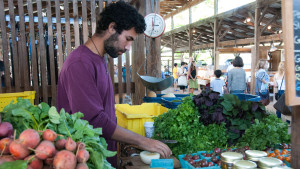 Among the jewelry sellers, honey vendors and baked-good peddlers at the Ithaca Farmers Market, it’s easy to find the abundance of colorful, fresh produce at the 6 Circles Farm stand. 6 Circles is a family-owned business based in Caywood, New York, that, since its founding nine years ago, has been a staple at the Farmers Market. Phoebe Van Vleet, marketer for 6 Circles, said the farm is Certified Naturally Grown, so they follow the standard organic growing processes but are not certified organic. Because the farm sells at farmers’ markets instead of stores, there’s a direct relationship with customers that allows the growers to advocate for their all-natural processes.

“It works for us because most of our marketing is direct, so we can communicate with people and stand by how we say that we grow,” Van Vleet said. “It’s a less expensive option. It’s also farmer-to-farmer based … so it means that we have the opportunity to talk with other experienced farmers and ask them questions.”

Aside from the community-based natural growing process, something else that makes 6 Circles stand out from other farms is its two acres of garlic. An abundance of products made from garlic are sold at the farm stand.

“One of the founding parts of our farm is our garlic,” Van Vleet said. “We have a variety of garlic-based products: garlic scape pesto, garlic scape pickles, garlic powder. Having value on these products that we can sell year-round distinguishes us from other places.” 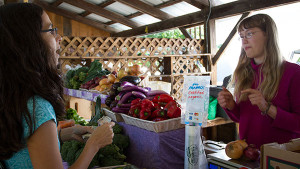 Amid numerous vendors at the Ithaca Farmers Market, Buried Treasures Organic Farm’s array of multicolored berries and vegetables are easily spotted. Their farm is located in Groton, New York. Owner Mary McGarry-Newman said her family has always loved to garden.

“We constantly found that we were gardening on such a huge scale,” McGarry-Newman said. “A couple years ago, we shifted over from wildlife biology careers to full-time farming.”

In order to prepare for Saturday, their busiest market day, the McGarry-Newman family starts a typical weekday around 5 a.m.

“It’s a very long day, and we often work well into the evening,” McGarry-Newman said. “We’re basically harvesting something every day. As a small family farm, we don’t have a lot of labor.”

What makes their colorful array of fresh vegetables, herbsand berries stand out is that everything is certified organic. McGarry-Newman said her family loves all of the produce that they grow. When the vegetables are all tasty and organic, she said, this makes for convenient cooking.

“As farmers, we don’t have a lot of time to fuss, so our recipes are really simple,” McGarry-Newman said. “When you start with delicious produce, you can always end up with something yummy.”

McGarry-Newman said she feels fortunate to be part of such an outstanding farmers market.

“We’re so lucky in this area,” McGarry-Newman said. “We have so much amazing food and so many places to get it.”