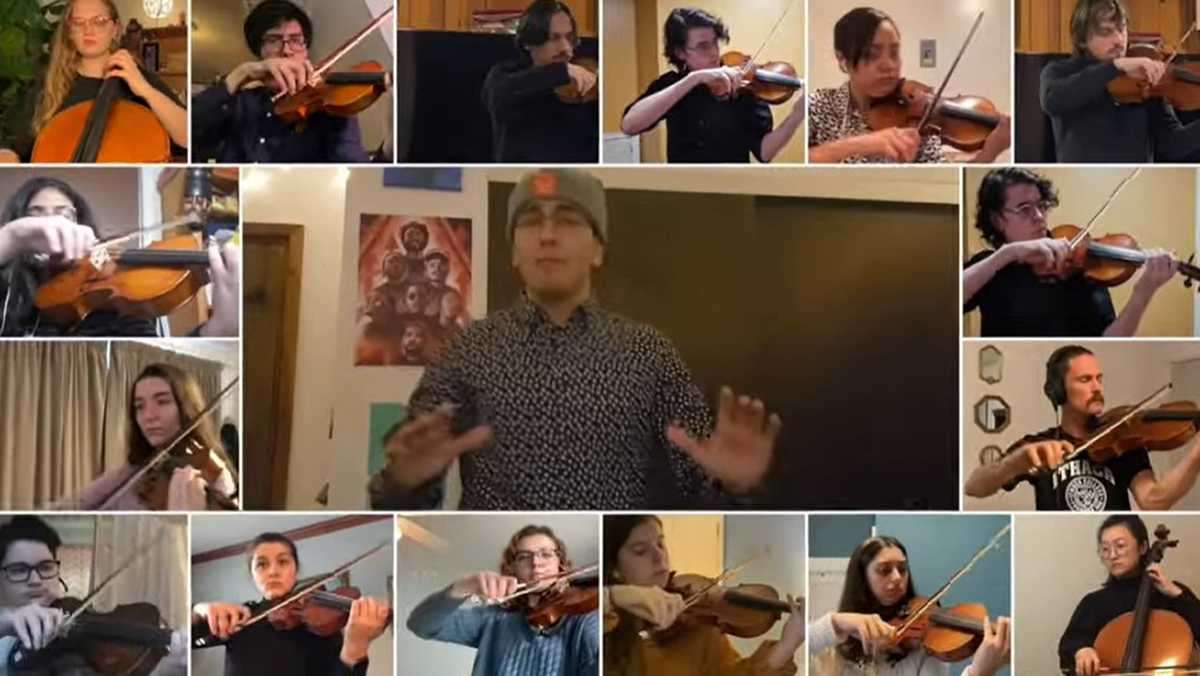 Images of Martin Luther King Jr. and other civil rights activists graced the screen as musicians played powerful melodies. Messages of joy, resilience and progress were all expressed in the images and videos of the annual MLK Celebration Concert.

Starting Jan. 25, Ithaca College hosted its annual Martin Luther King Jr. Campus-Wide Celebration featuring virtual workshops, conversations and artistic performances revolving around racial justice and Black history. On Jan. 29, the college’s MLK Celebration Concert premiered on YouTube as the final event of MLK week. In the past, the concert had been hosted in person, but this year it took on a different format to preserve attendees’ health and safety amid the COVID-19 pandemic.

Baruch Whitehead, associate professor in the Department of Music Education and director of the concert, said that rather than postponing the concert, he adapted the structure. Whitehead worked with producer Matthew Brockman ’18 to create the virtual concert. The video compiled performances from past MLK Celebration Concerts, new virtual performances, pictures and videos that represent moments in the fight for racial justice.

“We’re continuing the tradition,” Whitehead said. “The fact that we were able to come together with some old things and some new things, I think that’s going to be really interesting for the audience.”

The MLK Celebration Concert and all other virtual events from MLK week are archived online as a tool for members of the campus community to use in continued conversations about injustice and anti-racism.

“I felt like the Negro spirituals did not have their rightful place in terms of a very Eurocentric curriculum, so I decided that I wanted to have a group that would strictly do Negro spirituals and other African–American sacred music,” Whitehead said. “To me, it was like an homage to my grandmother and also to Dorothy’s legacy because I wanted to use music in the same way that she used music, to break down racial lines.”

In a performance from the 2020 MLK Celebration Concert featured in this year’s video, the Dorothy Cotton Jubilee Singers collaborated with the college’s choir to sing “We Shall Overcome” featuring Folds, a soloist at the college.

Folds said that during this performance, she tried to express the perseverance and strength of the Black community.

“While I was singing, I was thinking about how much we have already overcome and how much more we have to go,” Folds said. “I think I was tapping into my personal experience, but also just showcasing what the entire Black community goes through on a daily basis.”

In addition to recordings of performances before the pandemic, the concert closed by featuring two virtual performances that were made by editing together students’ self-recorded videos. The first was a video of “Amazing Grace,” arranged by Oliver Scott ’19 and performed by students from the School of Music that originally premiered on YouTube on Dec. 15. The second was “Glory,” arranged by Whitehead and Michael White ’19, originally from the movie Selma. The “Glory” video was produced over winter break specifically for the MLK Celebration Concert and was performed by the Dorothy Cotton Jubilee Singers and groups from the college’s School of Music, featuring Maria Ellis-Jordan from the Dorothy Cotton Jubilee Singers and senior Matthew Suffern.

Sophomore Mahum Qureshi said she played viola during “Glory” at both last year’s and this year’s MLK Celebration Concerts. She said that although it is in a different format, the piece is still inspiring.

“There’s just so much strength in that piece,” Qureshi said. “It moves me every time I play it with people, just the power and the strength. I don’t know anyone that doesn’t like that song or doesn’t feel something when they listen to it or play it.”

Folds said she believes that the annual MLK Celebration Concert provides an opportunity to amplify the voices of communities that are often stifled.

“I think the takeaway I wanted from the concert was just to be able to celebrate Black voices,” Folds said. “I feel like, especially in predominantly white areas, it’s so easy for us to get lost and not be celebrated, so I thought that that was really cool.”

Dani Novak, emeritus associate professor in the Department of Mathematics, attended the concert and said he preferred the virtual format to the in-person concerts held previously.

“I usually do not go to concerts, but here I am able to pause, watch again and again, get information about details using the web, go back to enjoy the show, etcetera,” Novak said. “It is just another form of expressing the human spirit, and it works for me.”

Banks said he believes music plays a part in the pursuit of civil rights because it provides an opportunity to better understand one another.

“When we talk about music, if we’re raising everyone’s voices, then we are inherently valuing people’s humanity,” Banks said. “And so the more we can understand people on a human–to–human level, the more likely we are to value each other’s lives equally. And that I think is one of the reasons that music can be so linked to all of these aspects of civil rights. Sometimes it’s not a policy thing, but it’s just a matter of making sure that no one is viewed as less than human.”

Whitehead said he hopes attendees and participants walked away from the virtual concert with a sense of hope and a desire to continue the legacy of King.

“Hopefully they’ll take away from the concert a renewed focus of being engaged and to really being able to talk to one another, and to really break down bridges, and break down walls to bring people together,” Whitehead said. “We shouldn’t let this just be a one–day event, that this is something that we strive for throughout our entire lives, every day of the week.”

The college will continue celebrating Black heritage with virtual events throughout Black History Month. More Than Just a History Month, a presentation from the Office of Student Engagement that will discuss the history of Black History Month, will take place Feb. 11. Alisha Lola Jones, a gospel music scholar, will present a lecture titled “Black Musical Masculinities and the Art of Enflaming Worship” Feb. 12.