Alisha Tamarchenko/The Ithacan
The Aaron Rizzo Band is influenced by blues, rock, R&B, pop and hip-hop. The band was selected to perform at the 2018 NAMM convention in Anaheim, California.
By Sierra Guardiola — Life and Culture Editor
Published: January 24, 2018

When junior Aaron Rizzo found out that his band was selected to play at the 2018 National Association of Music Merchants convention in Anaheim, California, he was shocked — especially since he forgot that he had applied.

The Aaron Rizzo Band is one of 160 artists selected to perform between Jan. 25 and 28. They are set to play Jan. 27 at 7 p.m. The band consists of Rizzo on guitar and lead vocals, sophomore Eric Myers on drums and senior Tristen Jarvis on bass. Rizzo said he wanted the band to be a trio because everyone has to pull their own weight, which makes for better musicians.

“Not only are we excited to play, but to meet and make a lot of connections,” Rizzo said.

The band’s music is influenced by blues, rock, R&B, pop and hip-hop. Rizzo said that because of the many influences, he does not like to confine the band’s music to one genre.

Myers said he likes playing with in the band because he and his bandmates work together to find the sound they want.

“What we have been doing is kind of putting the whole package together, trying to find the sound that matches the feeling we are trying to evoke with people when we are playing shows,” he said. 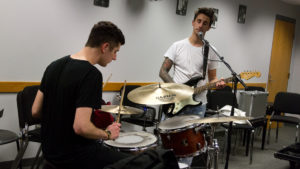 Sophomore Eric Myers and Junior Aaron Rizzo practice for their performance at the 2018 NAMM convention in Anaheim, California, on Jan. 25 – 28. (Elias Olsen/ The Ithacan)

NAMM is a global trade show convention that takes place in January of each year in Anaheim, California. Global music product companies, such as Fender and Gibson, attend this convention each year to showcase their new equipment. In addition, artists from around the globe perform at the convention, and big–name artists come to demo the latest equipment. Last year, Joe Perry, Alice Cooper and Johnny Depp performed for the public. Although all concerts are public, the convention itself is private, with over 100,000 registered guests attending.

When he was still in high school, Rizzo said, he decided to focus on producing original content by creating a band if his own.

“I loved the stuff I was writing and wanted to have my own name on it,” he said.

Now a sound recording technology major at Ithaca College, he writes his own music for the band. In the fall of his sophomore year, he used the facilities in the School of Music to record his first album, “Blck Tee Shrt.”

This has enabled Rizzo to realize that pursuing a music career could be possible, he said.

“You see all these solo artists and people who are big, and you go, ‘Oh, that can’t happen to me, that’s impossible,’ but they were where you were at one point,” he said. 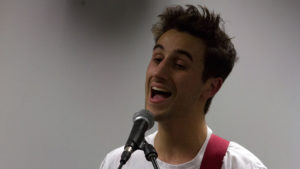 Rizzo runs through the set list for the 2018 NAMM show with drummer Eric Myers. (Elias Olsen)

Rizzo said his favorite song he has written is “Just One Glass,” as it pays tribute to the blues music he listened to growing up, especially that of Freddie King. Rizzo said what he likes the most about it is its simplicity.

“Something about the way the lyrics work with the chords and the instrumentation just feels so good,” he said. “It’s something I can play with a 10-piece band or alone in my bedroom, and I’ll never get sick of playing it.”

When Rizzo told Jarvis and Myers that they had been selected to perform at NAMM, Jarvis said he knew it was a big deal. However,  he said that after doing his own research, he realized it was much larger than what he had anticipated.

“There’s hundreds and hundreds of booths and brands and gear and guest artists and connections and noise — it’s crazy,” Jarvis said.

Jarvis said that although the trio is a band, he is there to support Rizzo’s brand, name and music. He said he is happy for Rizzo to receive this opportunity and also happy that Rizzo wants him to play for him.

“It opens up a million opportunities for the two of us that Aaron didn’t have to do,” Jarvis said. “He could’ve done it solo. … We get to go on the ride with him, and that means a lot.”

In addition to performing, the trio will be networking at the convention, which offers the opportunity for artists to walk away from the convention with endorsements from companies.

The trio has been playing together for four months, and NAMM will be its biggest show yet. Rizzo said local shows, like Porchfest and Funk N’ Waffles in Rizzo’s hometown of Rochester, have been a great way to test out what works for the group when they are playing live.

“I love playing local shows because you start to see the same faces at every show,” Rizzo said. “They start to grow in numbers, and pretty soon, you are making a name for yourself locally.”

Although the group rehearses the set list before a show, playing live is the best rehearsal it can have, Rizzo said. Through live shows, the trio works on its chemistry and their style.

Rizzo said preparation for the NAMM show has been professional.

“We want to go out there and have a great time playing. We don’t want to plan it down to every beat, but it does need to be planned out very well,” Rizzo said. 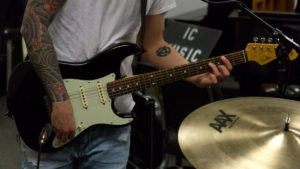 Rizzo plays guitar and sings lead vocals for The Aaron Rizzo Band. On drums is Eric Myers and on bass is senior Tristen Jarvis. (Elias Olsen/ The Ithacan)

Rizzo decided to apply for NAMM after his friend Natalie Morrison ’17 encouraged him to. Morrison had seen the band perform at a local show before and had met them through friends. As an intern for NAMM, Morrison was familiar with the types of artists that went to NAMM and thought Rizzo’s band would be a good fit, she said.

Morrison helped prepare the trio for its first NAMM experience, since it is such a large convention. She has given them advice about navigating the convention and networking to help them ease their way in.

“It is intimidating to walk into a huge convention center with all these products … and just to be immersed in this total music everywhere,” Morrison said.

With the trio stepping up to a bigger stage, Myers said, it is important to remember to enjoy the fact that the three get to play together.

As a freshman at Ithaca College, Ryan James ’00 formed the a cappella group the Sons of Pitches. While it started as an informal sextet, Pitches became one of the most popular a cappella groups in the country.

IC Bigs to host battle of the bands