Women empowerment organizations at IC create a network of support 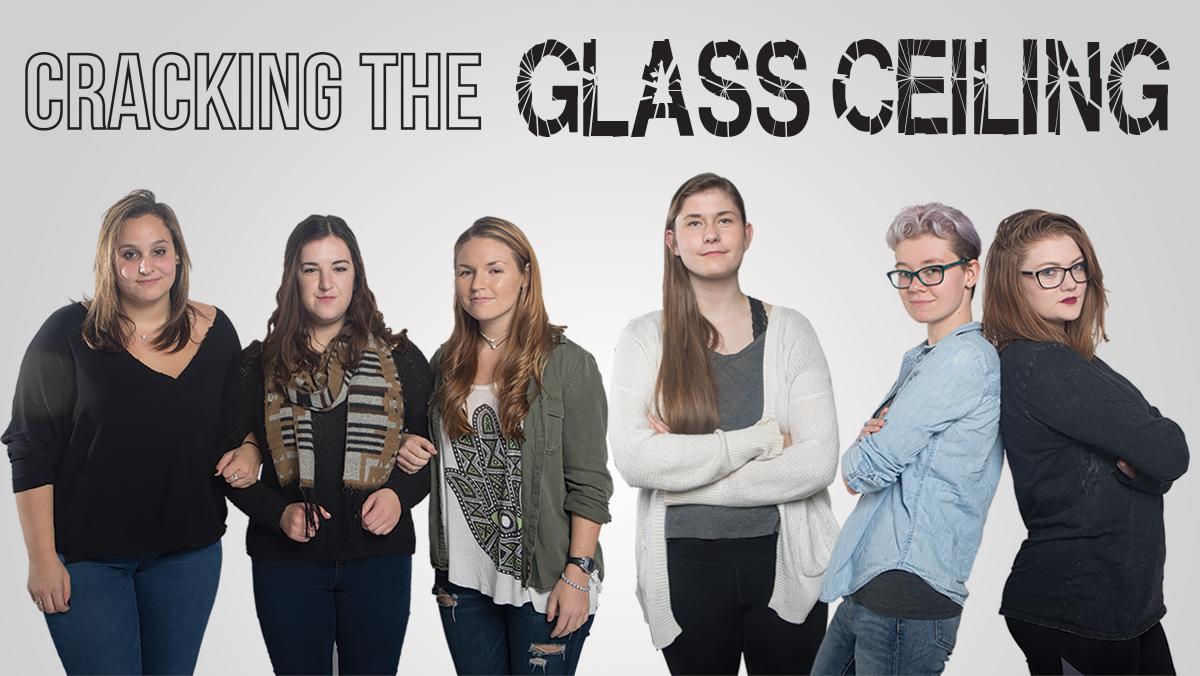 Eve Mahaney and Fernando Ferraz/The Ithacan
From left, members from Women Empowered, Women in Computing and Ithaca College Girl Up show off their power stances in support of the empowerment of women on campus.
By Lisbeth Perez — Staff Writer
Published: November 30, 2016

As senior Nicole Lane sat down for her first computer science class, she took a look around the room and realized that she was one of two women in the class. This realization led to doubts about belonging and a compulsion to overachieve.

“I needed to prove myself and that I could do it better than everybody else,” she said.

After attending a couple more classes, she became friends with the men in the department and decided that she was a strong and competent computer scientist.

So she joined Women in Computing, one of several clubs at Ithaca College whose mission concentrates on the empowerment of women. Similar organizations include Ithaca College Girl Up, She’s Fit To Lead — also known as Women Empowered — Feminists United and IC Sister 2 Sister.

Lane is now the president of Women in Computing, an organization on campus that provides a space for women who are interested in computer science and programming to discuss the low number of women in the program on campus and challenge it. This semester, there are 15 women enrolled in computer science, compared to 63 men, according the Office of Institutional Research.

Women in the group are able to share their personal experiences in the field, network and try their computing and programming skills.

“We have worked with the Game Developer’s club, and we’re planning on doing a mixer with the Cornell Women in Computing club,” Lane said, although the plans are still tentative. “We’re new, so we haven’t done many collaborations yet, but we are looking forward to doing so in the future.”

She said the group also does outreach with younger girls in the Ithaca community, such as providing guest speakers who are women in the industry from all different types of programs to help promote empowerment for young women.

“The problem is that there aren’t many women getting involved, and the problem stems from … the fact that it is hugely male-dominated,” Lane said.

The computing field wasn’t always male-dominated. The proportion of bachelor’s degrees in computer science going to women was at its highest, 37 percent, in the early 1980s, according the a report from the American Association of University Women. But the study found that hiring practices and professional networks in the 1990s tended to favor male entry into the field, and women tended to leave more, experiencing isolation in the workplace. In 2013, 18 percent of computer science bachelor’s degrees went to women.

Lane said her organization is beneficial and important because she feels that women in computer science need empowerment, support and attention due to the fact that is a largely male-populated field.

“Every week, I sit down in Williams 320, and I’m in awe at the women that are sitting there with me,” Lane said. “It feels incredible to listen to, to see, and to experience all of the incredible things that women can accomplish, individually and in groups.”

Sophomore Skyler Hollenbeck first got involved with Girl Up — an organization composed of advocates dedicated to bettering the lives of others and promoting the empowerment of women in leadership — in her hometown, Binghamton, New York, while she was in high school.

She became passionate about her advocacy work and decided to bring that with her to college by creating Girl Up last year.

Hollenbeck said the club’s goal is to empower women at the college and abroad. To help with this mission, she said, they advocate and raise money to help girls in other countries who might not have the same benefits that the members might benefit from.

“Girl Up is kind of multifaceted,” she said. “Sometimes at our meetings, we do leadership activities and team-leadership building to make girls feel more confident. We talk a lot about leadership in ourself and personal care and self-care and what that means.”

Girl Up is also part of the United Nations Foundation, which partners with other programs to promote health, safety and education for girls in developing countries where girls experience disadvantages.

Similar to Women in Computing, the organization also reaches out to the younger community members to teach them about the leadership qualities that empowered women possess. In the spring, the organization will be hosting a leadership summit for middle school and high school students in Ithaca in partnership with a high school in Buffalo, New York, and Binghamton University.

Hollenbeck said she has many plans for Girl Up in the future but that the biggest is for the organization to expand. She said she wants the club to not just be recognizable on campus and in the community, but to also be known as a club that has made a significant impact on both.

Women Empowered begins each meeting with a discussion of everyone’s highs and lows of the week.

“It may sound silly, but having a moment to just have a group of supportive people there to listen to you and help give you feedback when you need — it is an amazing feeling,” said Michelle Shipley, a current executive board member of Women Empowered. “This club has allowed me to interact with new people, helped me engage in new activities and develop a support system.”

Shipley joined Women Empowered when approached by the former president of the organization. She said she loved the idea of women coming together and having a support system, a form of networking and a way to become well-rounded women.

Seniors Emma Herschman, current president of Women Empowered, and vice president Sarah Handler said the club’s goal is to act as a support group on campus for anyone who is seeking help, but especially for women, which make up the group.

She said she believes a lot of people tend to reject therapy because of negative stigmas. However, Women Empowered creates an alternative to therapy.

“We are a group of distraction — we do fun activities that are purposely made to get people’s mind off of their current mental struggles,” she said.

The group is hoping to develop a partnership with Women in Communication to host an event about empowering women in the workplace, Handler said.

In addition to acting as a support group, the organization also hosts activities that help fundraise raise money for other nonprofit foundations on and off campus. For example, the group is currently selling chokers to raise money for breast cancer awareness and for the club.

Herschman said joining Women Empowered has created a safe place where she, along with many other women, have been able to grow.

“I joined the club to get more involved on campus and be involved with something I’m really passionate about,” she said. “I feel that there is no ‘safe space’ for people to go to on campus, and there are so many struggles that I myself experienced in college and felt trapped.”

As a main leader in the club, Herschman said she is able to see the smiles on all the women’s faces after their meetings, which makes her feel empowered.

“I love that these girls feel comfortable enough to open up and share any thoughts they are having,” she said.

When I first attended an IC Feminists meeting at Ithaca College, I was looking for a safe space to share the frustrations I felt as a woman within a patriarchal society.