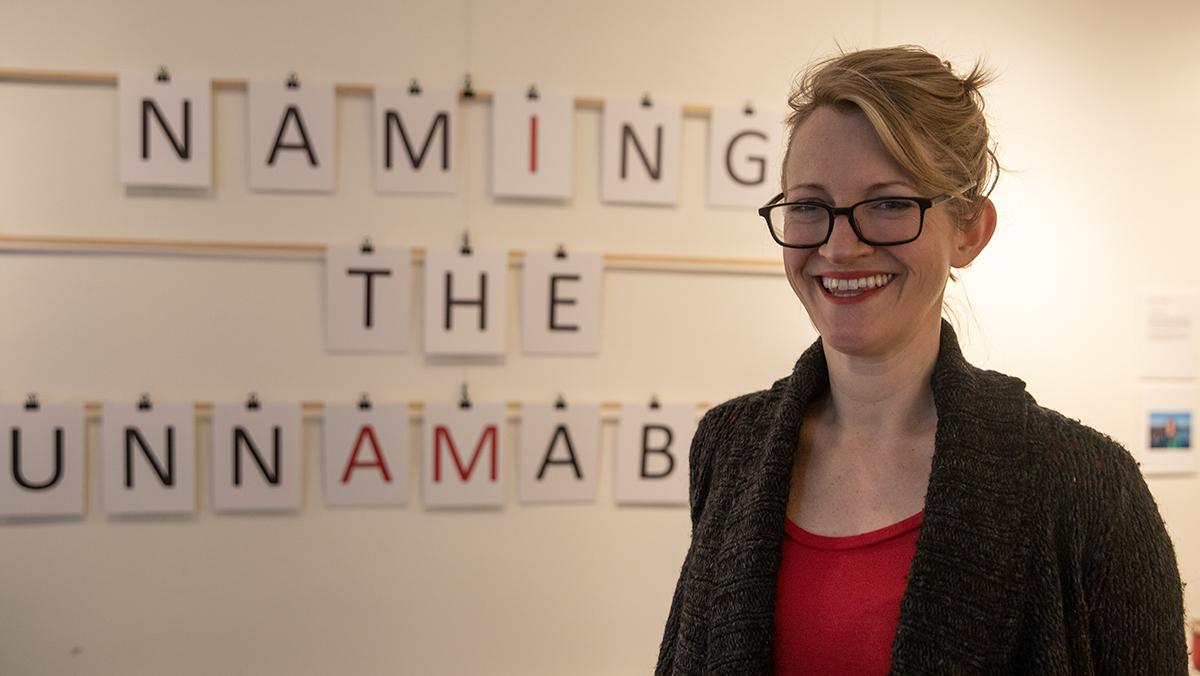 After sitting in their room one day and hearing a sound that made them feel anxious, Ithaca College junior Hannah Maloy could not understand why. The eventual realization that the sound reminded them of their trauma inspired the making of the piece “Trauma-Seption,” one of the 10 pieces in a local art exhibit.

Located in Downtown Ithaca at the Community Art Partnership’s ArtSpace, the “Naming the Unnameable Exhibit: Youth Stories of Resilience and Survival” art installation is open to the public throughout the month of January. Before entering the gallery, a content warning is given about mental health, self-harm, abuse and other topics. When visitors step foot inside, the work of 10 individual artists fills the walls of the room, showcasing personal stories of trauma and overcoming obstacles in different forms.

Bree Barton, a local author who has experienced depression herself, curated the exhibit, which features personal writing, short film, sound and hand-drawn art. Artists in the exhibit identify as queer, people of color and neurodiverse, along with those who have experienced homelessness.

According to data from the Centers for Disease Control and Prevention, 37% of high school students said they experienced poor mental health during the COVID-19 pandemic. For an article that Barton wrote in July 2022 about mental health in youth, she conducted a dozen interviews with many of the responses reflecting how young people suffered during the pandemic. Barton ended up reconnecting with two of the young people she interviewed for the article: first-year students Rayan Mohamed at Syracuse University and Diamond at Onondaga Community College. Their art is featured in the exhibit. Diamond chose not to give their last name for safety reasons.

For the other artists in the exhibit, Barton said she found them after recruiting for six months — emailing social workers, therapists, heads of nonprofit organizations and teachers to try and reach young people who wanted to share their stories.

“That was the hardest part, honestly,” Barton said. “It was like, ‘Tell me your most vulnerable, painful story of your mental health experience. And we’re gonna put it in a public gallery for people to see,’ which is hard. It’s a lot to ask.”

Originally, Barton said she had envisioned a solely auditory exhibit with 10 people recording their stories. After connecting with more and more of the young artists, she said she realized they all had different talents and kinds of art they wanted to do.

“We have visual art, portraits, drawings, an essay written to a parent who’s no longer with us, films, digital collage,” Barton said. “The kind of diversity of the people themselves, the young artists, the diversity of expression … is so much better than I even imagined.”

Maloy’s sound art was one of the three audio recordings in the exhibit, each of which visitors can listen to individually with the headphones and audio players provided. They said their art shows the psychological impact of trauma through sound, displaying different sounds that they associate with personal trauma. There are four movements throughout Maloy’s piece that listeners will hear: dealing with trauma surrounding domestic abuse, sexual assault, medicinal abuse and an emotionally abusive household.

“I never want the listener to expect what they’re going to be hearing,” Maloy said. “That’s part of it. Someone with trauma is always alert for any sounds that could possibly lead to danger or lead to harm. I wanted to put the listener in that experience of constantly being on edge.”

Despite not having been able to see the exhibit in person since they do not live in Ithaca, Maloy said the experience made them feel emotionally bonded with the other artists.

“When I’m able to open up to other people, I feel more empowered in my own feelings and then also vulnerable in a very good way,” Maloy said. “That’s not something I’m super used to.”

Mohamed studies film at Syracuse University, but long before she discovered her love of film, she grew up in a refugee camp in Ethiopia for seven years because of the conflict in her homeland, Somalia, with the Somali Civil War erupting after the overthrow of President Siad Barre. Along with the troubles she faced as a refugee in the camp, growing up in a family of mostly women contributed to her living in a very patriarchal society.

“We weren’t allowed to go to school,” Mohamed said. “We faced a lot of conflict within the camp. We also had other issues and problems just for being women. So I really wanted to talk about that because that was something I never talked about in public before.”

After reaching out to Mohamed again when Barton got the funding for her exhibit to see if she wanted to be a part of it, Mohamed said she was honored and the ideas started flowing. “Samir” was the short film that Mohamed premiered at the exhibit, based on her experiences in the refugee camp.

“Not every refugee has the same experience,” Mohamed said. “Girls in refugee camps also have very different experiences than guys. So I was like, if there’s one thing I can do, and one thing I can change in people’s minds, is just to bring awareness and advocate.”

In telling her personal story through film, Mohamed said that while it was not a comfortable thing to share with people, it was a healing process.

“It’s very personal to the point that I’m like, ‘Is this something I really want to share in public?’” Mohamed said. “It was a really scary thing to do, but it’s also very relieving. At the exhibit, [people] ask you very personal questions and it gets very emotional. Some people were tearing up.”

After Barton attended one of the Youth Action Board’s meetings, 24-year-old local artist BERETTA. — a member of the organization herself — jumped on the opportunity to create something commemorative for their friends who had recently passed away. The Youth Action Board is a local organization made up of individuals from the ages of 12 to 24 that have experienced homelessness, aiming to end youth homelessness by building a community of youth power and equity.

“The one thing I don’t want is for my friends’ memories to be lost to history,” BERETTA. said. “Even with people in the homeless community dying, people don’t really recognize the loss that’s there.”

“Homage to a Best Friend Fallen,” one of BERETTA.’s pieces in the exhibit, is a eulogy for their friend who lived in the jungle encampments, a mostly unsanctioned place in Southwest Park where the Ithaca homeless community largely resides. They did not want to draw any negative attention to their memory because of the stigmatization surrounding homelessness and instead wanted to preserve the memory.

BERETTA. said that when her homeless friend passed away, her death was all she was reduced to by the media outlets reporting on her passing. Many of the people closest to BERETTA. have recently passed away, one after the other in quick succession, leaving them with no time to mourn their losses. According to data from the Homeless Shelters Directory, in 2019, Tompkins County has an estimated 171 homeless people — up from 91 people in 2018.

Diamond created an audio recording titled “My Life,” a 37-minute-long message detailing their personal struggles with depression and suicidal thoughts. Diamond said they initially shared the “My Life” recording with their teacher and their therapist, and ever since then, they make audio recordings to cope with what they are going through.

“If I didn’t share my story with my teacher, I would not be here right now,” Diamond said. “The things I do [are] the reason why I’m here.”

While Diamond was not able to attend the opening night exhibit in person, they were able to join through a video call and said they loved the overall experience.

“Honestly, that space was so overwhelming,” Diamond said. “Even listening back, I literally cried because just hearing someone listening to why I made the audios and hearing that it’s helping older people. It just amazed me that I’m 19 and my words are helping people older than I am.”

The way through mental illness, Barton said, is not to shove one’s feelings down and erase the words — it is about finding the words to share and learning to ask for help.

“And so the idea of naming the unnameable is … everything in this room, right?” Barton said. “Suicide, homelessness, addiction, death, depression, self-harm, anxiety, all of it. It’s by having the courage to do what every artist in this room did, which is name it, claim it, talk about it, face it and share it with other people.”