Zombies have found a home on Ithaca College soil.

Marked with identifying bandanas, zombies chase human prey through campus. Humans wear a differently colored bandana on their arms and carry a Nerf blaster for self-defense. Just when the humans are cornered, time runs out and reality sets in. The humans and zombies are back to being regular students.

The Humans vs. Zombies Social Club is an organization of students who form bonds through Nerf wars. The club’s zombie-themed Nerf wars may last an entire week or a single day. Players with the role of zombies chase the humans in an attempt to tag them. The humans can run or defend themselves with Nerf blasters. If the zombie is shot, they are stunned and cannot tag for 15 minutes. 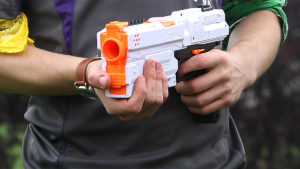 Humans arm themselves with Nerf blasters to defend against the opposing zombie team. (Courtesy of Bailey Faith)

While a round is in session, the game does not stop until time is up. Teams can decide whether they have certain “missions” or objectives to complete each game without the human side being turned into zombies. Though the wars usually have a zombie-related theme, HVZ hosts other Nerf tag games as well. These games will typically be short — a couple of hours long — and have no consistent theme.

Senior Club President Jacob Herman said he joined HVZ because he enjoyed the friendly atmosphere. He also said he decided to become president of the club because he wanted to keep that spirit alive and allow others to enjoy it as much as he did.

“I went to the org fair my freshman year, and this club really caught my eye,” Herman said. “I went to play a few times, and I loved the environment that it invites. The people who play HVZ are just a wonderful, healthy, good group of people to be around.”

Herman said he believes HVZ is important to have on a campus because it is inclusive and welcomes people to act as silly as they want.

“I think it’s important because it’s a lot of fun, and I’ve seen people use it as a really good stress relief,” Herman said. “I see people just running around and having fun acting like children sometimes. It’s just incredible. It’s also great for people who aren’t typically very athletic, who join because they aren’t able to play on a sports team.”

HVZ was officially created in 2005 at Goucher College. The creators, Goucher College students Chris Weed and Brad Sappington, designed a website that functions as a general guideline for how the game should be played. Each individual group may come up with a specific set of rules in addition to the initial concept. The game got so much attention that it received a Kids’ Choice Award at IndieCade, a festival that showcases independent games, in 2010.

However, the game has also been received with concern. Due to worries about inspiring gun violence on school grounds, some colleges and high schools have banned the game altogether. Despite this, senior HVZ member Justin Rouzier said that clearly marking players and keeping the game exclusively outside helps the club maintain a positive relationship with the Office of Public Safety and Emergency Management and the college.

Sophomore HVZ Secretary Damien McMillan said HVZ is a popular club at many other colleges nearby. One of these colleges is Pennsylvania State University.

“Each year, Penn State has an invitational, and I think they total a couple of hundred different groups who come,” McMillan said. “At our invitationals, we usually have at least four other schools attend. We have some people from New York City who aren’t actually part of a school — they just get together and come out.”

The college’s club maintains relationships with HVZ groups on other campuses as well. These schools include Binghamton University, Hofstra University, Stony Brook University and more. These are groups it frequently plays with, using mediums like Facebook and Discord to decide on details of each game and announce the beginning of rounds to members.

“It doesn’t need to be an invitational for others to come,” McMillan said. “They are always welcome to come to our week and day rounds when they’re in the area.”

McMillan said he sees the club as a useful social opportunity and has made significant connections after joining HVZ.

“I’ve made a lot of my friends through HVZ, actually,” McMillan said. “It’s really fun. The people who play are really nice, and if students are looking for something to do, it’s super casual. Anyone can just come join in the fun. We don’t bite.”

Herman said he wants students at the college to feel welcome to join its events, including its invitational, which will be held Oct. 27. Attendees do not have to be members of the club to play.

“If someone has played before or wants to play for the first time, they should come along,” Herman said. “They can play and say hi to us. We’re all friendly people.”

Rouzier said he joined the club because he felt that it triggers a survival instinct, which he believes sets HVZ apart from other clubs on campus. Rouzier joined the club as a freshman and has continued playing all four years of his college career.

“It just looked really entertaining,” Rouzier said. “Every single time you go outside, there’s a chance for some action. It’s engaging that way. It’s immersive. It feels more like a survival thing rather than being just some guy with a Nerf blaster.”

Rouzier also said he admires how HVZ allows its members to be themselves and avoid stigma around role–play gaming.

Rouzier said he also loves the social aspect of the club and how widespread HVZ is. The groups are not exclusive to college campuses and are relevant among people of all ages. He said he believes HVZ is a social group in reality as much as it is a game.

“This isn’t just some small community,” Rouzier said. “There are a lot of people who do this. … It’s more about the people around you than actually playing HVZ. The club is the club, and we all love playing, but there definitely is a camaraderie to it. I wouldn’t have the friends I have today without HVZ. When you walk in, there are a lot of smiling faces that you want to see.”