By Ana Gavilanes, Jadyn Davis, Jasmine Scriven, Kalysta Donaghy-Robinson, Ray Milburn, Tessa Dill
Ana Gavilanes/The Ithacan
For the second year after the hiatus caused by the pandemic, the 40th annual Apple Harvest Festival was in full swing for all to enjoy. Vendors from across the Northeast came to celebrate the local Ithaca festival.

The Ithaca community gathered together to celebrate the 40th annual Apple Harvest Festival on The Commons from Sept. 30 to Oct. 2. After its triumphant return last fall from the hiatus of the COVID-19 pandemic, vendors hoped for an equally active and exciting festival. Local Ithacans did not disappoint, flocking the streets in search of food, drinks and crafts from vendors far and wide. Apple Fest was conveniently held the same weekend as Ithaca College’s Family Weekend and President La Jerne Cornish’s inauguration, resulting in a memorable experience for all members of the Ithaca community. 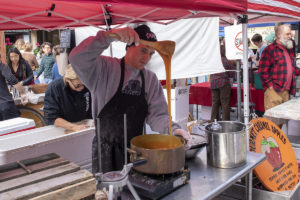 Thomas Russo at the Sugar Lips Booth prepares a caramel mixture that is served with sliced apples to festival goers. Russo said he has been working at Apple Fest since he was 13 years old. Jadyn Davis/The Ithacan 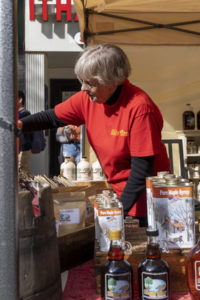 Sheri Kay, who owns the Maple River Syrup Company with her sons, said she is thrilled to be back at Apple Fest after a hiatus during the peak of the COVID-19 pandemic. Kay and Maple River have been a staple of Apple Fest for many years. Ray Milburn/The Ithacan 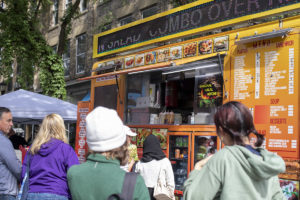 Customers form a long line waiting for one of the many food trucks at Apple Fest. Jasmine Scriven/The Ithacan 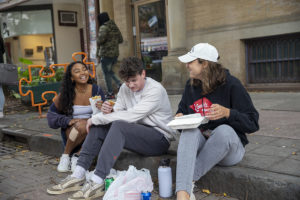 From left, Cornell University juniors Jinjee Denner, James Connolly and Annabel Maldonado sit along the edge of Cayuga Street. After a long day of perusing local vendors and artisans, the three students enjoyed the unreleased apple pie empanada from SPM Empanadas, one of the many participating food vendors. Kalysta Donaghy-Robinson/The Ithacan 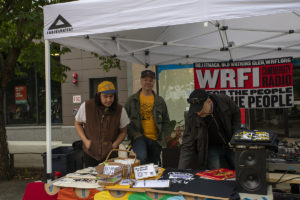 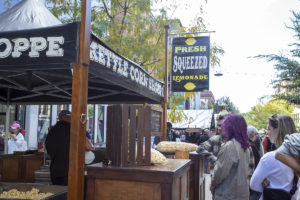 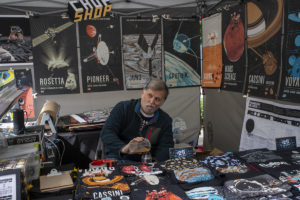 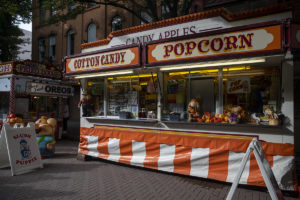 The carnival and entertainment section of the annual Apple Harvest Festival was located at the corner of West State Street and Cayuga Street. Among the many food vendors and artisans populating the festival, there were also carnival rides, cotton candy and popcorn stands. Kalysta Donaghy-Robinson/The Ithacan 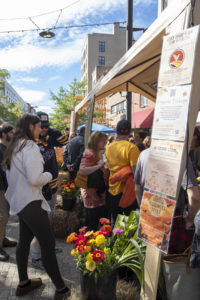 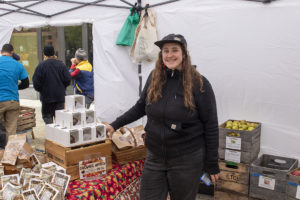 Amara Steinkraus, who managed the Little Tree Orchards booth, said she is following in her mother’s footsteps, as she has been working the booth at Apple Fest for the last 12 years. Jadyn Davis/The Ithacan 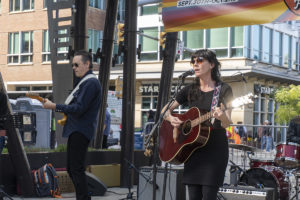 From left, Sid Green and Janet Batch of the Four-Bangers performed songs from their album “You Be the Wolf” at the Bernie Milton Pavilion on The Commons during Apple Fest on Oct. 1. The band also features Mike Brando and Chris Ploss, who are not pictured. Ray Milburn/The Ithacan 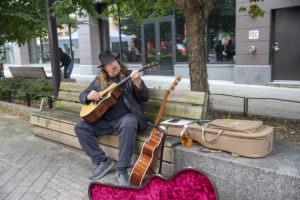 Local Ithaca musician Steve Perrigo plays his guitar during Apple Fest. Perrigo said that he comes back every year to perform because of the warmth of the people he finds there. Kalysta Donaghy-Robinson/The Ithacan 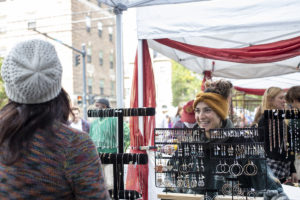 Ashley Messana speaks with a customer about the variety of jewelry on sale at her business’ booth. Jasmine Scriven/The Ithacan