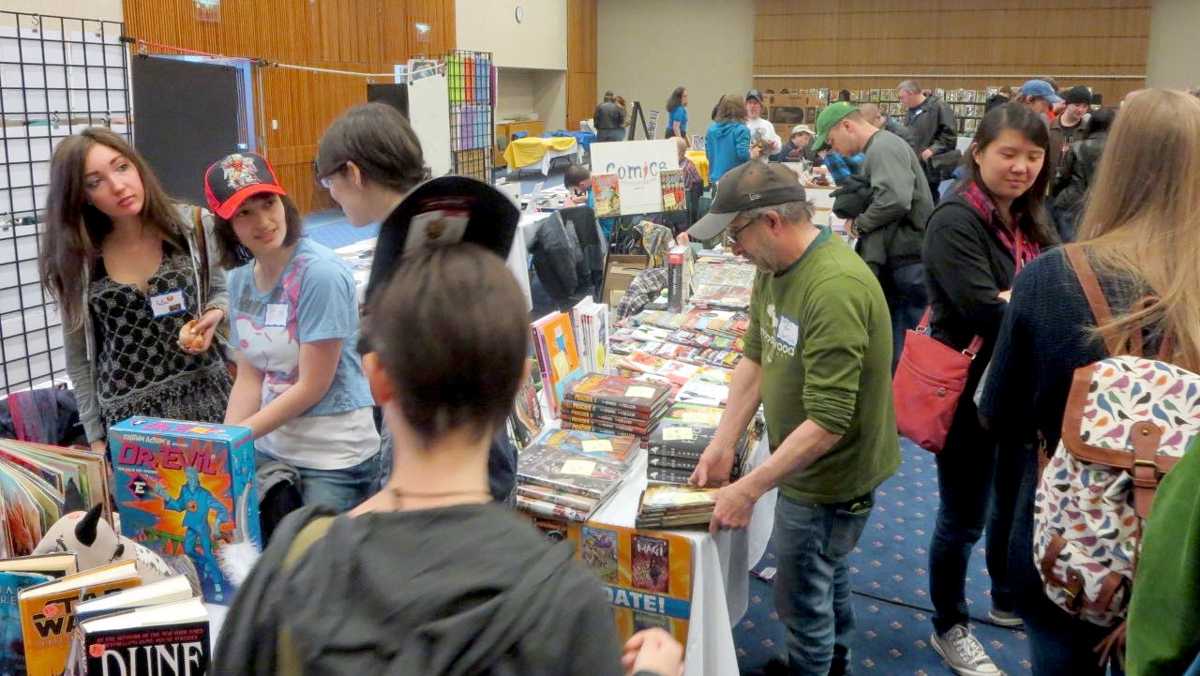 Courtesy of Alec Frazier
The class, “ITHACON: Promoting and Managing Conventions is offered for a full semester for the first time this year. The first Ithacon held on Ithaca College’s campus was in 2013.
By The Ithacan — Vivian Goldstein
Published: February 10, 2019

A Gryffindor, Spider-Man and a Stormtrooper walk into a room. They’re there not for a crime-fighting crossover, but to celebrate the second longest–running comic convention in the United States: Ithacon ’44.

The convention will be held from March 23–24 in the Emerson Suites, and this year, students will help to create and manage Ithacon for a semester-long course called ITHACON: Promoting and Managing Conventions, where they will gain hands-on experience with event management.

Ithacon was held for years at the women’s community building, but after it was torn down in 2013, the convention was homeless. Katharine Kittredge, professor in the Department of English, and Ithaca College adopted the convention. In previous years, Kittredge has taught an abridged version of the course — this is the first time the course will be taught for a full semester and with a new co-instructor, Ed Catto, lecturer in the Department of Management.

Kittredge said that once the convention found its permanent home at the college,  she quickly realized she did not have the technological and social media expertise to do it alone and enlisted the help of students who previously took an abbreviated version of the course.

Junior Andy Yzaguirre said she has been helping Kittredge with all of her “shenanigans” for years. She said she has helped manage Ithacon in previous years and is excited to be back.

“This is my second or third year with her,” Yzaguirre said. “Once as a low-level volunteer and then as an organizer, and it has definitely grown since then.”

The current course allows students to get real-world experience in a safe environment, with no pressure to always have the answers and no demand to make money because it’s funded by the college. It also mixes the creativity of the humanities with the entrepreneurship of business. In the class, students learn how to manage and plan events, but also how to translate creative ideas into concrete events and how to work with different groups of people.

Students aren’t expected to work amongst themselves, but to communicate with featured guests and vendors. In the past, there have been notable people in attendance at the convention, like Jim Shooter, former editor-in-chief of Marvel, and author Tamora Pierce, who will be returning this year. The class also allows students to get a closer look at smaller, entrepreneurial businesses they are coordinating with.

“What we wanted to do this time is really kind of mix in all the elements of business and entrepreneurialism and event management — everything from start-up thinking to marketing to analyses after the show — and combine that with the artistic part of the show from creative arts to writing,” Catto said.

The convention will have a theme for the first time since coming to the college. In honor of the 60th anniversary of “The Twilight Zone” — a television show that made sci-fi history and was created by Rod Serling, former Ithaca College professor — Ithacon will be focused on “The Twilight Zone.”

The room to implement new ideas doesn’t just benefit the convention itself, but the students as well. Kittredge said she does her best to make sure students aren’t instructed to sit down and manage certain parts of the event that they have no attachment to. Rather, she encourages them to make the convention their own by pitching ideas that appeal to their interests.

“I’m asking students not just to do what I do, but to dig into their own interests and background and translate that into something that’s education,” Kittredge said.

For sophomore Angelina Randazzo, the class was a perfect fit, combining her interests in imagination, pop culture and children.

“I’m really interested in using pop culture as a way to inspire creativity in children,” she said.

Though the class has just started, students said they are already having fun.

“I am enjoying it so much,” Yzaguirre said. “I like understanding how conventions are working.”

The change to a full-semester course also leaves time for students to step back after the convention. After most events, companies will analyze what went well and what needs improvement for the future. With this extra time after the event, students can gather and analyze Ithacon ’44’s data to see what worked and what didn’t. This way, students can get a jumpstart on next year’s con, allowing them to leave their mark not just on Ithacon ’44, but on Ithacon ’45 as well.