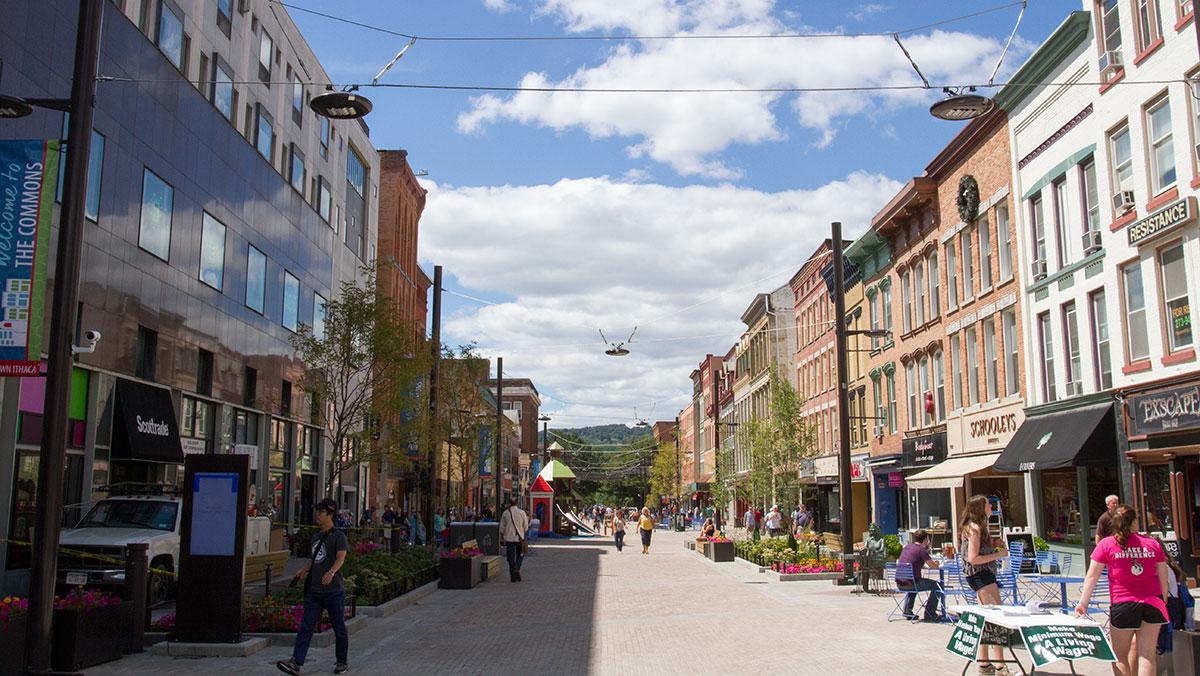 Yana Mazurkevich/The Ithacan
According to the college’s 125th anniversary website, the Ithaca Marriott Downtown on The Commons is completely booked, making it the 14th out of 17 Ithaca area hotels that are already fully booked for the weekend.
By Emily Snyder — Contributing Writer
Published: November 1, 2017

Ithaca College will be hosting the 125th Anniversary Celebration of the college, along with the inauguration of the college’s ninth president, Shirley M. Collado, on Nov. 3. With a weekend full of events both downtown and on campus, local businesses are working to manage the overflow of visitors flocking to the Ithaca area this weekend.

In addition to the college’s birthday bash, the college will be hosting the annual family weekend and alumni weekend. According to the college’s 125th anniversary website, the Ithaca Marriott Downtown on The Commons is completely booked, making it the 14th out of 17 Ithaca area hotels that are already fully booked for the weekend.

Jim McMann, director of sales at Best Western University Inn, said hotels in the area can charge higher rates during this weekend because the demand for rooms is so high. According to McMann, rates increased about 10 percent for reservations for the first weekend in November. Deanna Nolan, director of sales at Fairfield Inn and Suites, also said that hotels have justification to raise prices for a short stay during the weekend of Nov. 3.

“This particular event has multiple aspects to it, so it makes the demand on the rooms in Ithaca higher,” Nolan said.

Nolan said the large event limits access people have to hotel rooms when they are all packed into one weekend.

Activities held at the college during the weekend will introduce new customers to small businesses. Nuria Hunter ’16, front of house manager at Waffle Frolic, said that even though they are normally busy, these weekends bring more people.

“Over the years, I’ve just seen us get busier and busier on these big event weekends,” she said.

Megan Silverstein, part-time employee and previous manager of Waffle Frolic, said that spreading out the events over different weekends could prevent lengthy lines at Waffle Frolic and produce a steady flow of revenue. However, hosting family and alumni weekend, the 125th Anniversary and the inauguration separately would cause each weekend to be just as crazy as the one happening this year, Silverstein said.

Alexis Randall ’09, owner of Waffle Frolic, said they will work to be efficient when they are faced with increased business.

“All we can do is try to be as ‘on the ball’ as possible to put out as much food as quickly as we can,” she said.

Sunny Days Marketplace, a local gift shop, is preparing for the 125th  Anniversary by remodeling the storefront display with new blue and gold merchandise from the Ithaca College Bookstore. Although store owner Deirdre Kurzweil said she assumes Sunny Days Marketplace could potentially gain more revenue if the events were separated, she hopes this weekend has the same impact.

“Presumably, it’s not possible for one individual person to come to every single event, so, ultimately, you could get the same number of people, just at one time,” Kurzweil said.

The store has partnered with Rick Watson, director of college stores, with the hope of bridging the campus to The Commons. They have expanded the availability of college apparel and accessories to celebrate the festivities held on the weekend.

Heather Lane, owner of Purity Ice Cream, said that she is qualified to tackle the lines that will come since she has over 20 years of experience dealing with events in the Ithaca community. Lane also said that she schedules additional staff and orders extra supplies prior to large events.

Purity benefits from visitors in November because of the correlation between weather and sales, Lane said. As the temperature declines, sales generally drop, so this event will bring in more revenue. However, dividing the events among multiple weekends would bring in the most consumers, she said.

“If the events all happened on different weekends, each would be busy, and we would be more able to accommodate and serve the people,” Lane said.

Lorie Wasilawski, director of sales and marketing at the Ithaca Marriott Downtown on The Commons, said the relationship the community has with the college is important.

“I think it’s important to continue the relationship and to make sure there’s not a separation between the city and the college, and that we keep working together to bring events in,” Wasilawski said.

Dave Prunty, executive director of auxiliary services and adviser of Event Planners of Ithaca College (EPIC), said the college is combining alumni weekend, family weekend and the 125th anniversary celebration to bring the community together to celebrate the college.

“The confluence of opportunities here is to have this massive celebration and this opportunity to look at the past of the college, where we are right now and where we are going in the future,” he said.

Lori Staba, executive director of advancement services, has been primarily working on the logistics associated with events taking place in the Athletics and Events Center for over a year.

“We are trying to reach out to our entire campus community — students, families, alumni, faculty, staff for this weekend,” Staba said. “One of the themes that emerged is the high value everyone places on relationships, and we wanted this weekend to be as inclusive as possible.”

Although the goal of combining events is to gain the most participation from as many members of the college as possible, Prunty said that there are cost benefits as well. The college saves money by renting chairs, stages and LCD screens only once for the weekend, rather than renting multiple times. Programs held in the A&E Center can demand $8,000 for the truss, back-drop and LCD panels alone. A similar cost is charged for renting stages and chairs, Prunty said.

Staba said that planning the weekend on South Hill was challenging during the transition of presidents, because the team needed to anticipate approval from the new president. When Collado took office, Staba said that Collado was pleased with the plans and that Collado has contributed suggestions as a supportive partner in coordinating the event.

Junior Chelsea Holiday, president of EPIC, said that she has high expectations for the event. Holiday said that she anticipates a busy and crowded weekend, and is confident that the events planned by the committee will run smoothly.

Holiday said that the adaptability of the event planning team is important during this weekend. With it being a weekend-long event, Holiday said that if things go wrong, there will be time to adjust.

“Parking is an issue when there are a lot of people on campus,” Nealis said. “I think we would benefit from more parking, although I don’t really see how that’s feasible.”

During previous family weekends, junior Keilah Figueroa said that she observed that guests typically travel off campus to explore the City of Ithaca, as opposed to remaining on campus.

“I imagine that due to the greater variety, advertisement of so many events and things to do on campus outside of the day-to-day life, students and their families will be more apt to stick around, making IC much busier than usual,” Figueroa said.

This weekend, more than 1,300 people will tour the Ithaca College campus, meet faculty and staff and attend special events as a part of its seventh annual Family Weekend. The event is an opportunity for parents to explore the campus and experience their children’s lives at college. Doreen Hettich-Atkins, coordinator of special services and programs…

New hotel on The Commons to open mid to late October